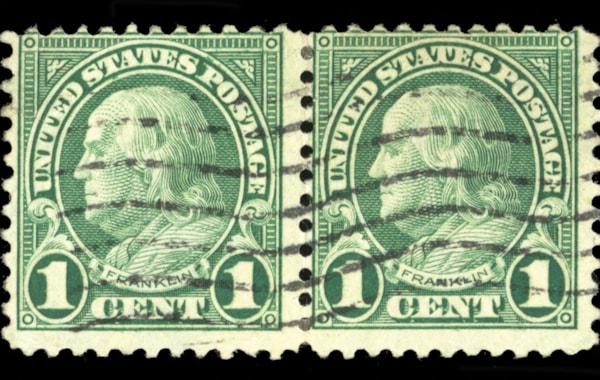 The 22 April sale run by New York auctioneers Cherrystone is set go ahead as planned via the 'CherrystoneLIVE' online facility, with a range of United States Stamps & Postal History on offer to collectors.

The sale at Cherrystone will feature a wide range of US material, including Stampless Covers, Free Franks and Autographed letters, Postmasters' Provisionals, and Modern Errors. The following lots are just some of the highlights from the sale… 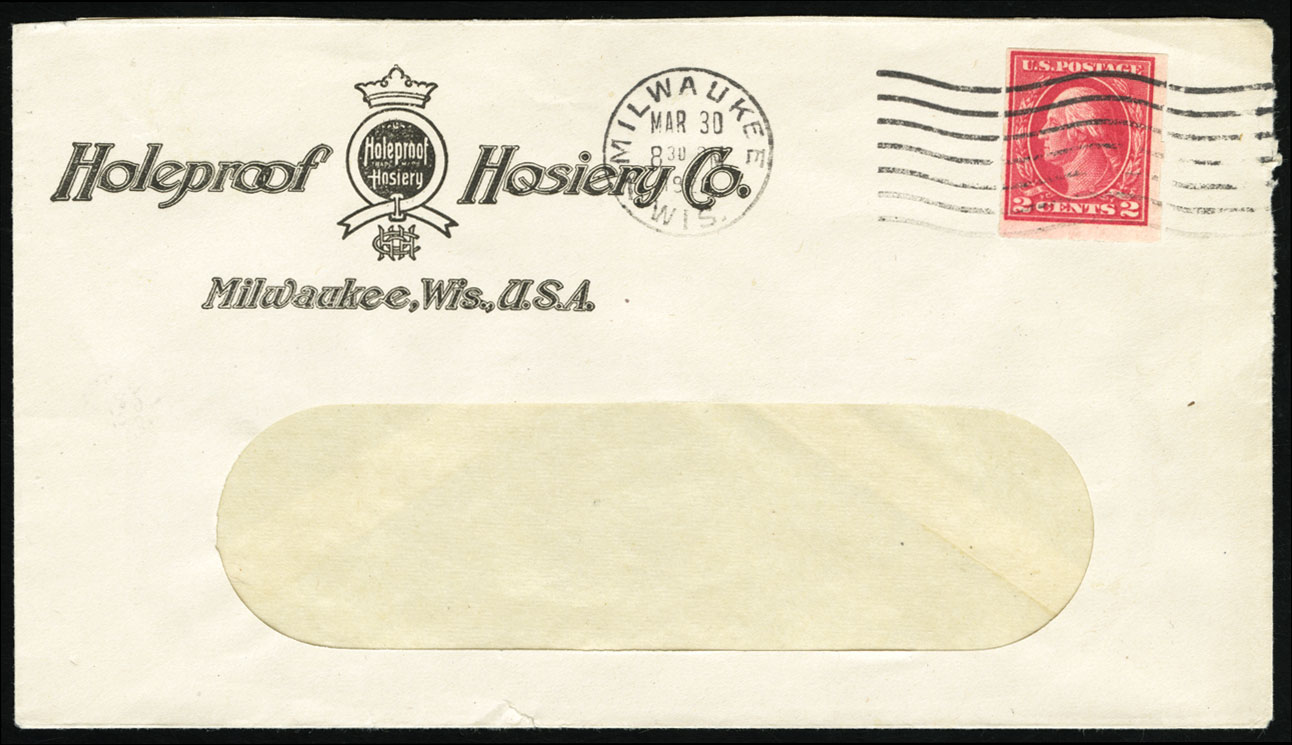 A cover bearing an imperforate 1917 2c deep rose. Estimated to sell for $100,000 (c.£81,250)
The imperforate stamp is tied by wavy machine cancel on a 'Holeproof Hosiery Co." window envelope which also features a "Milwaukee Wis Mar 30, 1920" circular date stamp (CDS). The lot description explains: "482A was issued imperforate by the Bureau of Engraving and Printing and sold to the Schermack Company for use in its machines. The 482A on cover is one of the premier rarities of 20th Century US Philately. Siegel Census records only three covers, one unused single, a used pair and 33 used singles for a total of 39 stamps. Most examples are either cut well into the design or have the Schermack perfs trimmed away on one side." 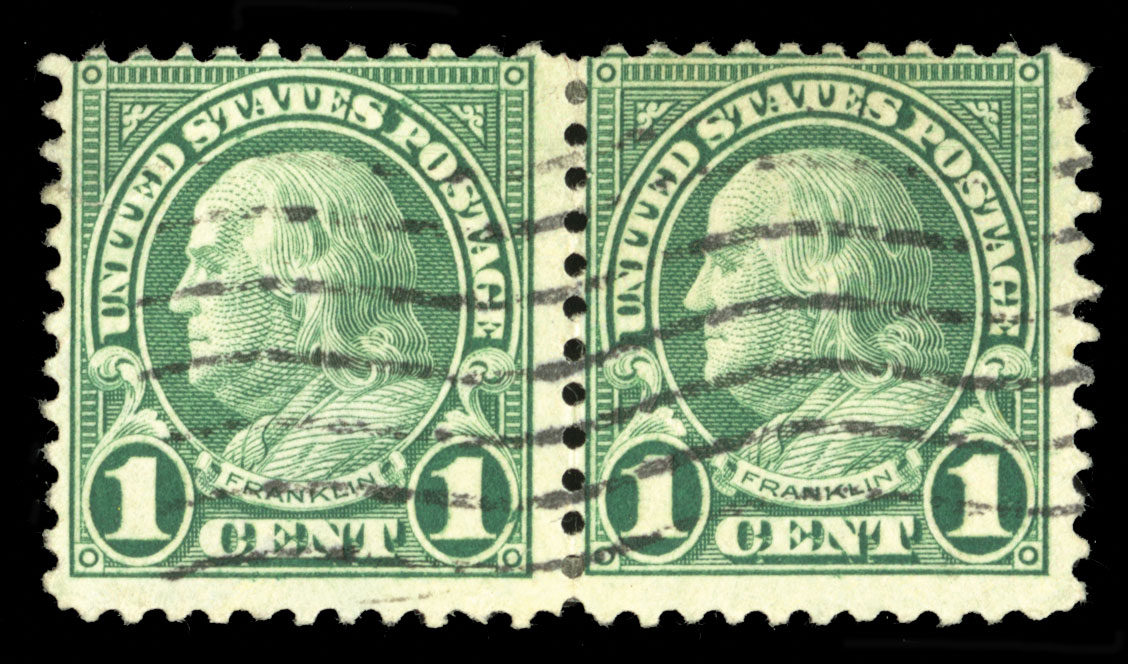 United States 1923 1c green, Rotary, perf. 11, used horizontal pair. Estimated to sell for $7,500 (c.£6,095)
One of only four known pairs, this stamp is described as being 'one of the rarest 20th Century United States stamps in unused condition" and the lot description goes on to say: "the 1c green, Scott 594, is waste from a horizontal rotary printing used to make coils. At the beginning or end of a coil-stamp print run from the 170-subject rotary plates, some leading or trailing paper was produced that was too short for rolling into 500-stamp rolls. In 1919 the Bureau devised a plan to salvage this waste by perforating and cutting the sheets into panes. They were put through the 11-gauge flat-plate perforator in use at the time, giving the sheets full perforations on all sides. The existence of Scott's 594 was not reported until four months after the final sheets were delivered, and the 1c Rotary perf. 11 was soon recognised as one of the rarest United States stamps)." 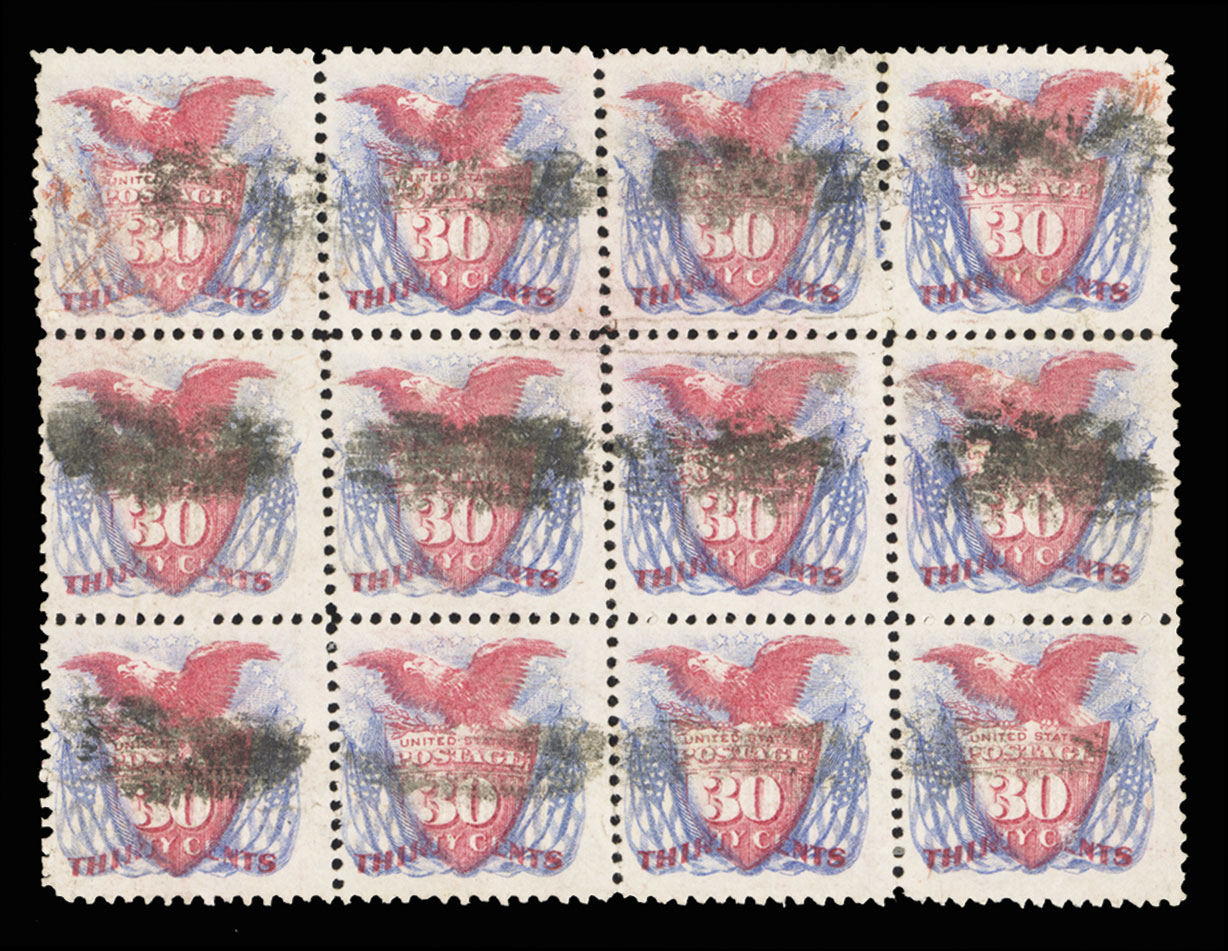 1869 30c ultramarine & carmine, horizontal block of 12. Estimated to sell for $1,500 (c.£1,200)
Cancelled with black grids, this block of twelve boasts excellent colours and is well centred for a large multiple. According to the auction house, the largest recorded unused multiple is a block of six, the largest recorded used multiple is a block of twelve, of which three or four are known. 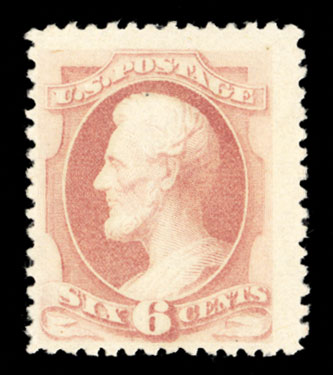 1880 Special Printing of the 1879 Issue. Estimated to sell for $30,000 (c.£24,370)
This 1880 6c dull rose is unused without gum as issued and with fully intact perforations on all sides, wide margins. Only 26 certified examples have been recorded with most of them having some degree of faults.