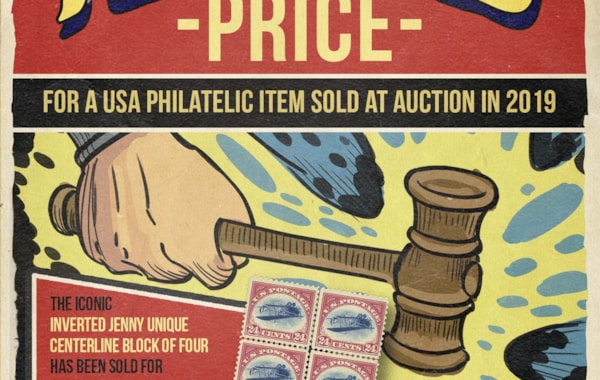 The 'centerline' block of four Inverted Jenny stamps has been sold at Spink in New York for $1.7 million, making it the most expensive US philatelic item to be sold during 2019.

The rare block of four stamps was sold in a special two-lot auction, alongside a single example of the famous 24c Carmine rose and blue, Centre Inverted USA stamp error, which fetched $510,000.

The block was described as having 'vertical and horizontal guide lines crossing at the centre, beautiful centring, with the left pair being especially choice.'

The single stamp was said to be 'an extraordinarily choice and exceptionally fresh mint example of this coveted and storied error rarity, wonderfully well centred amid large margins, beautiful rich colors on crisp clean paper, while full and even perforations all around further enhance its considerable eye-appeal, plus its reverse reveals full original gum which is quite lightly hinged.'

As reported earlier this week, the unique block of four Inverted Jenny stamps was reportedly given to seller Nick Gross by his father William Gross, a renowned and wealthy bond manager and philatelist, who has sold a range of high profile stamps in recent years, often giving the money to charity. According to the New York Post, the sale of the stamp was contentious, with former owner William Gross hoping the stamps would be retained by his son.

Watch a video describing the two lots below…