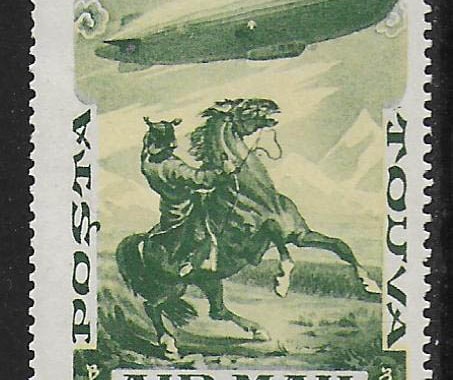 Our roving philatelic private eye identifies another stamp that looks set to go up in value.

Back in the 1930s, young (and not so young) collectors eagerly collected the pictorial stamp issues of (Tannu) Tuva, a small republic located in southern Siberia on the border with Mongolia. It had been established in 1921 but the state was only recognised by the USSR and Mongolia. It joined the Soviet Union in 1944.

Today the Tuva Republic is part of the Russian Federation. It is a mountainous country with numerous rivers and lakes. The republic has a population of 307.000 mostly Tuvan-speaking people. Back in the 1930s, the country had a population of less than 100,000.

Stamps were first issued in 1926. They showed a Wheel of Truth. Later issues featured local scenery and wildlife.

In 1936, the republic celebrated its fifteenth anniversary. To mark this important jubilee, a set of 23 regular stamps was issued. There was also a set of nine airmail stamps. The first set actually comprises 37 different varieties as most values exist perforated both 11 and 14.

It would appear that very large quantities were cancelled to order and sold to the stamp trade, leaving very few mint sets left. The value of mint stamps is usually two or three times that of CTO stamps.

CTO stamps are readily available but it might be difficult to assemble a complete set with all perforation varieties. In mint condition, the two 1936 anniversary sets are decidedly rare and certainly worth full catalogue value if you are lucky enough to locate them.