The third sale of the William H Gross Collection of United States Postal History recently took place in New York with a final sale total of over $5.5 million.

The high-profile sale began with a selection of Postmasters' Provisionals, stamps created by regional postmasters before the USA introduced stamps for the entire nation. The highlight was a rare example of the 20¢ St. Louis 'Bears' provisional stamp on Gray Lilac paper, used on an attractive cover from the famous Charnley & Whelen correspondence(a firm of stock and exchange brokers in Philadelphia).
The lot description added: 'Only 18 covers with Scott 11X6 are recorded in the USPCS census.' 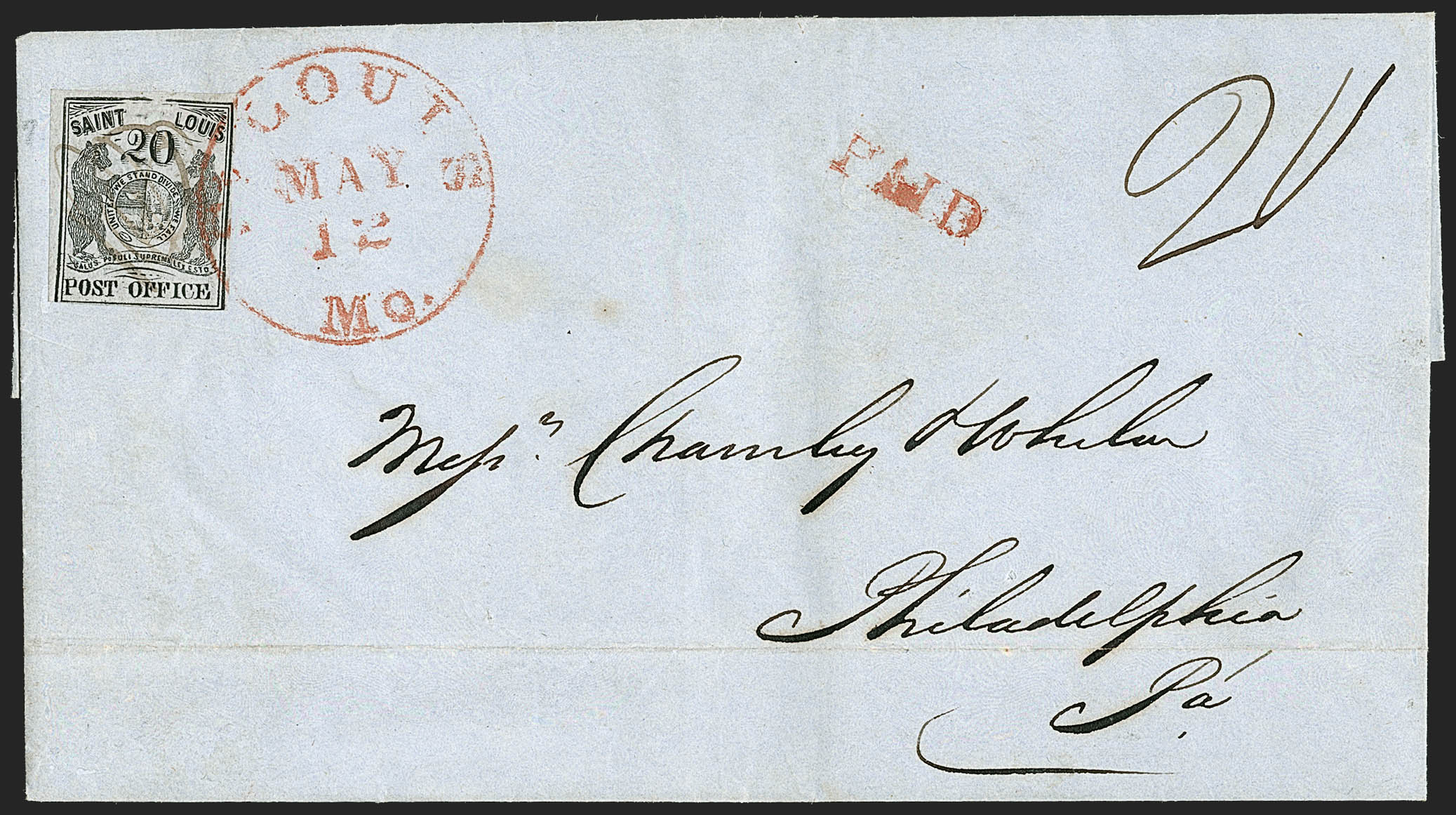 The range of covers featuring the first US stamps, issued in 1847, included some headline-grabbing rarities.

'The Finest of Only Three Known 5¢ 1847 Blocks on Cover'
What was described as 'the finest of the mere two covers and one front with an 1847 Issue block – of the three known, all 5¢ denominations, this is the only Brown Orange and the only domestic use of a block' fetched $115,000. The lot description explained: 'Only three blocks of the 5¢ 1847 are recorded on covers, including the block of five on cover to England offered in this sale (lot 152) and a block of four on a front address panel (without flaps) to Montreal, Canada. This cover with a block in the Brown Orange shade is the only domestic use and the finest of the three recorded.' 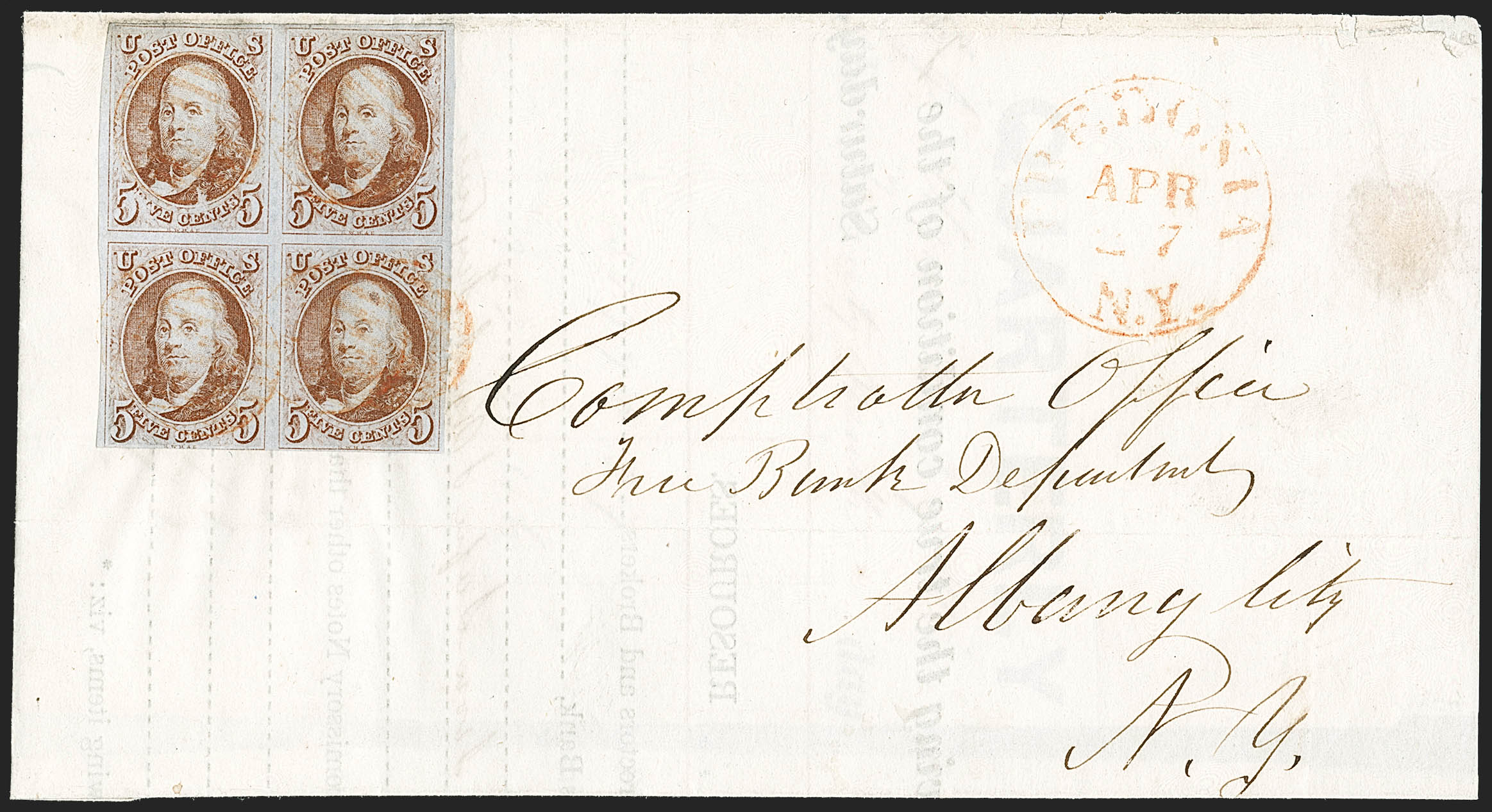 '50¢ Postage for an Obsolete Odd-Increment Rate'
The largest recorded multiple of the 1847 Issue known on cover was also offered and fetched $42,500. Said to be 'one of the most outstanding covers in classic United States philately', the cover featured a horizontal strip of ten 5¢ Red Brown stamps, positions 91-100L, the full row from the bottom of the left pane with left sheet margin and right interpane margin.

The largest 10¢ 1847 Issue franking on cover, paying the triple 30¢ Panama rate on a cover from Peru to Mexico was also sold. The cover featured nine 10¢ 1847 stamps, all used entirely outside the United States.

The auction catalogue detailed: 'The 90¢ postage paid the triple 30¢ per half-ounce rate from Panama to points along the West Coast. The cover originated in Lima, Peru, and was stamped by the U.S. mail agent and consul in Panama, Amos B. Corwine, before it was carried on a Pacific Mail Steamship Co. steamer on the coastal route to San Francisco. Among the stops made on this route was the Mexican port city of San Blas.' 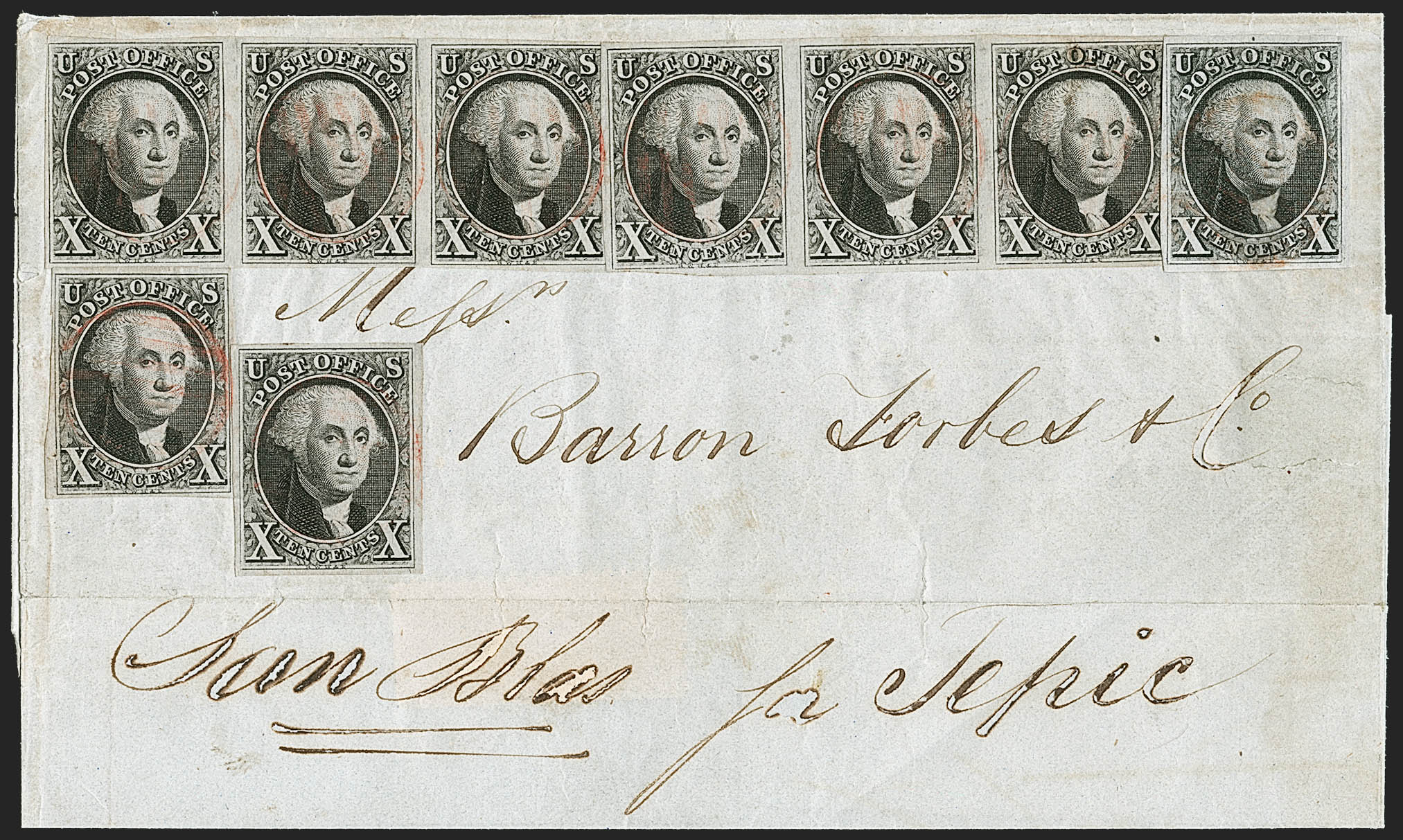 The auction describers were quickly searching for superlatives as the sale went on. An 1851 mixed-franking cover described as one of the most desirable covers in all of classic worldwide philately. The Canada and United States first issues mixed-franking cover featured a 1851 3p 'Beaver' and single 5¢ 1847 Issue, both cancelled in Montreal, Canada. 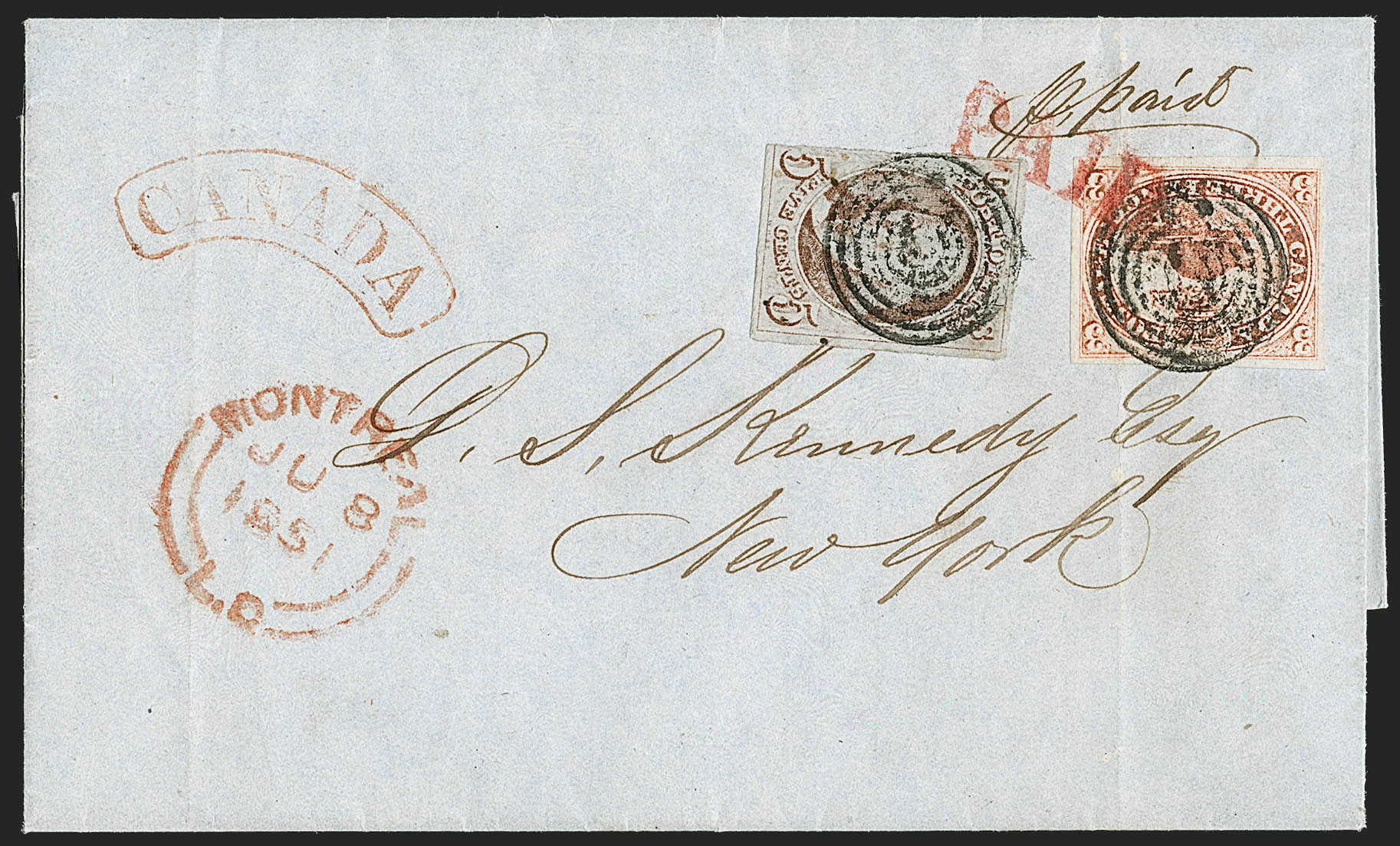 This cover is remarkable in three respects: first, it is a rare Adams Express Company cover carried across the lines of war; second, it is addressed to another country; and, third, it shows how stamps from the South were considered to be contraband and were not accepted as federal postage. 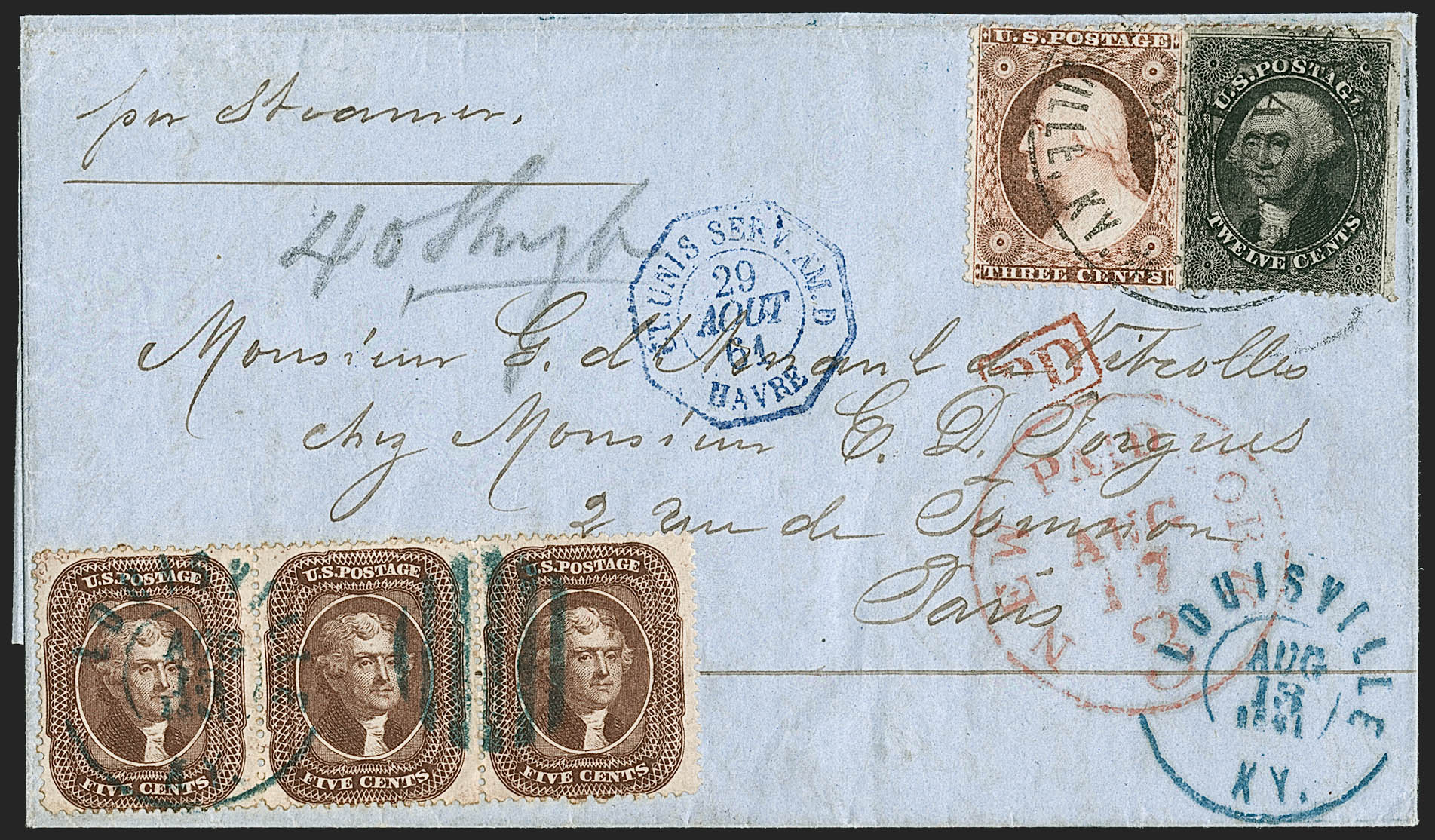