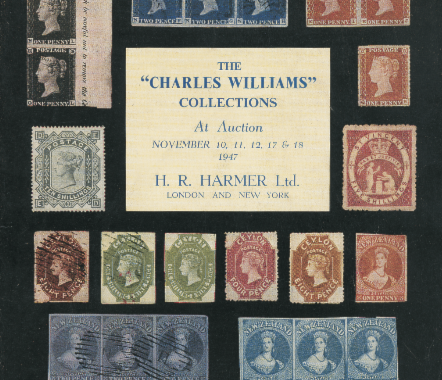 A good range of auction catalogues is a valuable asset to the collector, writes GB stamps expert Mike Jackson

A good range of auction catalogues is a valuable asset to the collector, especially if he or she is interested in the ‘census’ type of research – the kind that would answer questions such as:

Of course, not all important items have appeared at auction, but the specialised GB sales of the major auction houses from the last eighty years yield a huge amount of information.

Sale catalogues from the 19th century and early part of the 20th century are rare.

However, these early catalogues can be of limited use to the researcher because they often had very few illustrations, and the descriptions often did not include the essential information, such as the lettering in the case a Victorian line-engraved stamp or the date of a cover, to allow the lot to be identified.

The original catalogues of the Ferrary sales are very difficult to obtain, but a facsimile in a single hardback volume of the complete set, including the Luder-Edelmann sale, was published by Joachim Erhardt in Stuttgart in 1987.

Many important items appeared in ‘ordinary’ specialised GB sales, rather than ‘named’ sales, so it can be very worthwhile to obtain runs of the major auction houses which sold (or sell) GB material.

In 1984 Robson Lowe Auctions became Christie’s Robson Lowe, then in 1997 Spink acquired the business and are conducting important GB sales to this day.

With the exception of the Baillie sale, Sotheby’s do not hold stamp auctions any more, but they had some important GB sales in the 1980s.

Stanley Gibbons began their GB-only sales in the 1960s, and continued into the 1990s when GB material tended to be included in their general sales.

Harmers used to have specialised GB sales up to the early 1990s; nowadays they include a GB section in their normal auctions.

Bonhams tend to do the same today, since they took over Phillips’ stamp auctions in 2002. Before then, Phillips held significant GB auctions throughout the 1980s and 1990s.

Cavendish Auctions have always had strong GB sections in most of their catalogues, and a useful run, especially for the postal historian, would be from the early 1990s to date.

Grosvenor Auctions hold regular GB-only sales and their catalogues from when they began in December 1997 to date are well worth obtaining.

Auction records are important in establishing provenances, and they have been used by professional philatelic experts around the world, most notably by Karl Louis in Germany, whose Card Index of Victorian Great Britain stamps and covers includes over 60,000 items, many of which have been culled from auction catalogues.

Karl has also used his data to identify repaired or altered items by comparing auction lot descriptions and illustrations.

Many examples of such altered stamps and covers appeared in Karl’s article ‘Wondrous Transformations’, published in the first issue of Fakes, Forgeries, Experts in 1998.

The alterations discovered by Karl by comparing the same items as they appeared in different auction catalogues included margins being added to imperforate stamps, perforations being added to repair missing teeth on perforated stamps, stamps with pieces missing being made whole, and even a 1d black on an illustrated envelope being replaced by a 1d red.