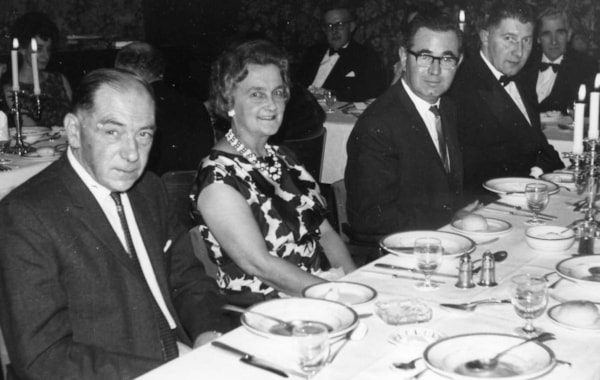 Ralph (fourth from left) at an annual Philatelic Society dinner held at a hotel in Boroughbridge Road, York, in the mid-1960s

York Philatelic Society is sad to report the death of its most long-standing member, Ralph Peacock, who died on 1 July 2019 in York District Hospital.

The society told Stamp Collector that Ralph (shown fourth from the left on the main photo) was 86 years old and lived in Oakland Avenue, Heworth. At this time of his death he was the president and acting secretary of York Philatelic Society, having served as president from 1970-71, secretary from 1982-83 and exchange packet secretary from 1964 to 1966.

Ralph enjoyed collecting philatelic material connected with York and also wrote a history of York Philatelic Society from its establishment in 1948 through to 2005. Ralph trained as a plumber and, after National Service in the RAF, worked privately and for City of York Council. He was a long-standing Freemason.

During his retirement he held office in the Tang Hall Local History Group and at the time of his death was trying to compile a comprehensive list of all men in the Tang Hall and Heworth areas who underwent National Service in the 1940s to 1960s. He was also trying to trace the ancestry of a man by the surname of Chicken, who was a corn inspector in York in the 1940s.

Ralph’s wife, Gladys, and a daughter, Ann, predeceased him, and he lived alone. A spokesman for the society said: “We have sadly lost a true gentleman – one of the old school, who served us with distinction for decades. He was always willing to help people out and roll his sleeves up when there was work to be done. He will be sorely missed.”

The funeral service was held at York Crematorium.