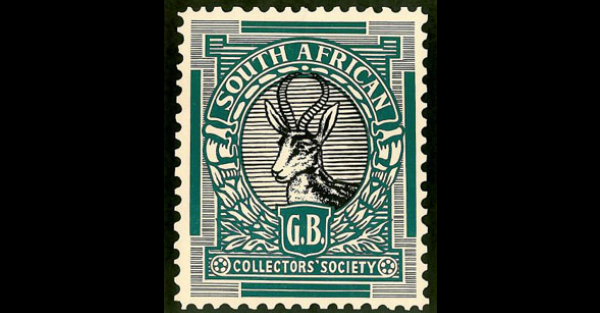 The Saturday consisted of five forty-minute displays on completely different subjects. Rob Lester displayed a fine array of advertising covers, before members enjoyed a PowerPoint display by Bas Payne who has been studying serial number positions in respect of different printings.

Simon Peetoom showed a postcard correspondence from a Sgt Eddie Stuart each bearing a nice signed ‘CO / Prince Alfred Guard / Port Elizabeth’ cachet. The Port Elizabeth Volunteer Rifles was founded in 1856 and changed name after a royal visit. He followed this with a display of the better items from a collection formed by former SACS member Edgar Kinsey in the 1950s and 1960s.

After lunch members were entertained by a non-member, Jamie Smith, who took us through transportation of Transvaal gold to the USA via Canada to pay for arms. The role of black troops was mainly as pioneers but the case of Job Masego was highlighted.

The last show of the day was Bob Hill’s apartheid period, delivered with panache, including two local revenue stamps that had not been seen before. Bob wasn’t yet finished, however, as he was the worthy winner from six entries for the Abell Trophy which followed his display. He was presented with the trophy, by our president, at dinner that evening.

John also announced the winner of the Wicks Award for best article in the Springbok during 2018. This went to Wilbert Davies for ‘WW2 Foreign S.A. covers’. Sunday morning was spent viewing members displays, including Nick Arrow who showed four recent acquisitions he was very pleased with. Bob Hill followed with his superb Verneuk Pan collection added to by another cover, plus a superb signed photograph of Campbell.

Chris Oliver then showed the first issue of Republican air-letters 1971-76 where the imprinted stamp featured an aircraft over Tafelberg.