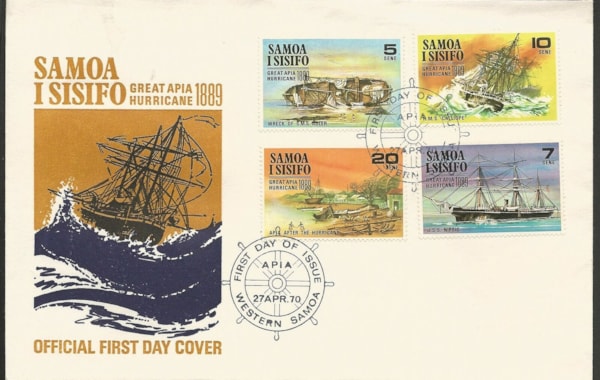 In our ongoing series on collectors' favourite stamps, James Eti from Apia, the capital of Samoa, explains his love of a simple 1970 stamp, the story behind the design, and why it holds a special meaning for him.

My favourite stamp comes from the set issued in memory of the Great Apia Hurricane that raged over Samoa in March 1889.

Throughout that year United States, German and British warships prepared to do battle over which superpower would rule our islands. SMS Adler was part of the Imperial German Navy’s gunboat flotilla that had already shelled Samoan ports. She was about to land troops to occupy Apia when the hurricane struck.

All German and United States vessels sank or were wrecked on our shores, with the British fortunate to escape to the open ocean. Most islanders gave thanks for an Act of God that had destroyed our enemies and saved Samoan lives. On the downside, our lands were later partitioned to form German Samoa and American Samoa, with Britain taking other Pacific islands including Fiji into her empire as compensation. Like the British, the Germans issued colonial stamps, including some for Samoa. The design featured Kaiser Wilhelm’s yacht, Hohenzollern, to symbolise German international sea power.

Following the First World War the confiscation of most of Germany’s colonies removed Samoa from Berlin’s control. Rather than returning our island to the native population, however, the United Nations handed control to New Zealand. Equally galling to our sensibilities was a later issue of German Cinderella stamps with black borders to symbolize mourning for lost colonies including one inscribed SAMOA alongside the hated Kaiser’s yacht.

Our prayers were answered in 1962 when Samoa finally regained its independence. We celebrated the Great Apia Hurricane and depicted the wrecked German gunboat on the five sene value of our 1970 set. I hope other readers appreciate why I regard that stamp as my favourite.