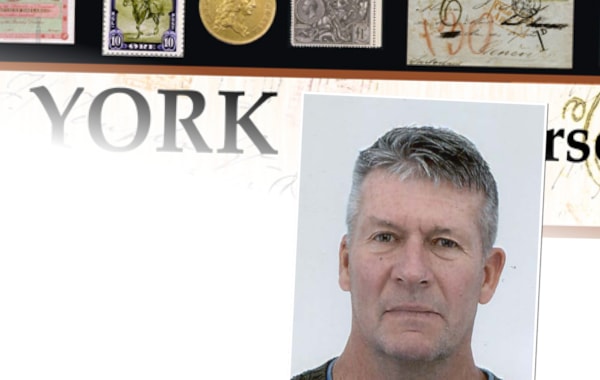 We recently chatted to postal history dealer, collector, and York Stamp Fair organiser Chris Rainey and asked him about the history of the event and what the future holds for collecting and the York show.

How did York Stamp and Coin Fair begin and how has it changed over the years?

The original York Stamp & Coin Fair at York Racecourse was started by Mark Jarmain in the early 1970s he continued with the fair until around January 1987 when the fair ceased.

A chance conversation at the Strand Palace monthly fair between myself Trevor Davis and Tom Green with Tom saying “We need a York Show.” Trevor was not wanting to organise another show, Tom says “why don’t you do it together?”

I had never been on the organising side, I had a good teacher, Trevor had been the Chairman of Stampex and on the committee for the 1990 London international. Eighteen months later in the summer of 1989 the present York Stamp & Coin Fair began.  In 1996 we moved from the old Grandstand to the new spacious Knavesmire Grandstand. The Fair hosts around 145 stamp and coin dealers.

Why not visit these York dealers’ websites and add to your album?

As organiser of the event, what's the most rewarding aspect of holding the fair?

The fair has evolved over the years although the layout has remained the same: "If it works don’t change it!"

We have added meeting rooms free of charge to specialist societies, Several Societies arrange meeting’s and their annual conventions around the show. Meeting people who have from all corners of the globe to visit and the thank you from both collectors and dealers for organising a great show.  From a fair it has turned into an event.

In recent years, York has become more involved in ABPS philatelic competitions, can you explain how that came about and what it offers to visitors?

The show has always had close connections with several societies, we were approached by the ABPS some years ago about the possibility of a Northern Exhibition we had the space and we offered this free of charge to them, we have hosted several of the Northern Exhibitions. The plan is to alternate with the Scottish Congress in Perth.

What would you want to say to regular visitors to York right now and what tips can you give to allow them to keep collecting?

We were overseas when the first lockdown was announced in March, returning several weeks later to a jungle garden!! and glorious weather, I decided to work on the collections, yes I do collect! during the winter I am in the sorting stage, my tip would be keep your collection up to date!!

Are you hoping to run the fair in July?

We need the Government to relax the indoor rule for events, hopefully with the vaccine programme, this will happen and we will be able to have the fair as planned for 16-17 July. You can still keep in touch with your favourite dealer through our new website (www.stampshows.net) which will be active shortly; a new feature on the site will be 24hr access to their websites.

More generally, how do you think the pandemic has affected stamp collecting?

Much has been written and discussed over the closing of societies and Stamp collecting in decline, the pandemic has proved this to be incorrect, online trading is booming with many new collectors renewing their hobby. Specialist societies with informative websites have gained members, Zoom has kept collectors in touch, enabling all corners of the world to connect at the same time.

The 'new normal' will return with fairs, society meetings. Lets not lose what we have gained, embrace the new technology for a healthy hobby.

With thanks to Chris and Kate Puleston for their time and help.
Find out more about York Stamp & Coin Fair at: www.stampshows.net