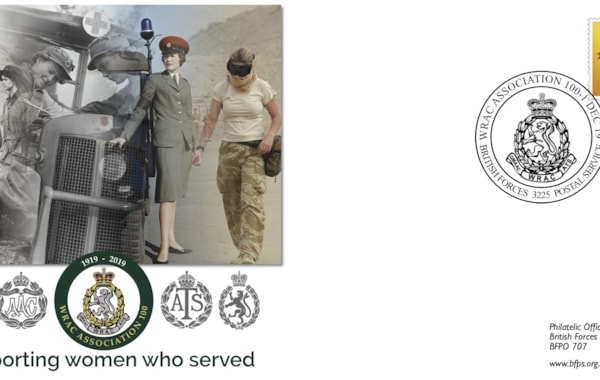 The British Forces Philatelic Service (BFPS) have produced a special commemorative cover to celebrate the centenary of the formation of the Women’s Royal Army Corps (WRAC) Association.

The release of the commemorative cover, produced in conjunction with the WRAC Association and issued on 1 December, is also supporting fundraising for a new WRAC Lady statue to be unveiled at the National Arboretum in early 2020.

The cover bears an image depicting women soldiers in various roles during the past century. A Royal Mail Scottish 1st class definitive stamp (lion rampant) was chosen for the cover to reflect the Association’s ‘Lioness’ theme. The stamp is cancelled by a bespoke BFPS special handstamp numbered 3225.

Two versions of the cover are available; a standard unsigned version (priced at £7.50) plus a signed and numbered limited edition (£15). The latter will be signed by Dame Kelly Holmes MBE (mil), Honorary Colonel of the Royal Armoured Corps Training Regiment. Dame Kelly served with the WRAC and is a ‘Life Member’ of the Association.

All covers include an A4 double-sided information insert and will be presented in a protective cellophane sleeve making a very collectable souvenir of the Association’s Centenary.

All profits from the sale of these covers, after production costs, will be donated to the WRAC Association to support their work. The covers can be ordered from the BFPS online shop or by post by sending a cheque (payable to ‘BFPS CIC’) to BFPS, The Old Post Office, Links Place, Elie, LEVEN, KY9 1AX.