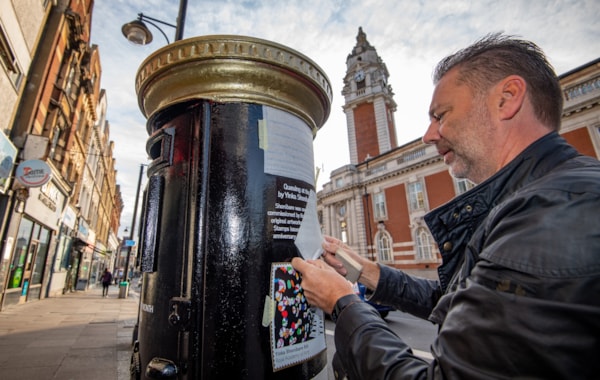 The ‘social media-activated postboxes’ are painted black with a gold trim, and each feature a figure of significance to the British black community, who has also appeared on a special stamp. The postboxes highlight the prominence and nationwide success of all the Black Britons featured.

A full list of black Britons who have appeared on Special Stamps over the years can be found by scanning a QR code on the boxes, which link through to a dedicated online gallery on the Royal Mail website www.royalmailgroup.com/en/insights-innovation/responsibility/in-pictures-black-history-month-2020

The postboxes are located in special sites in London, Glasgow, Cardiff and Belfast (the Belfast box is a parcel postbox), and each pays homage to a black Briton.

The Acre Lane, Brixton postbox features the image Queuing at the RA by Yinka Shonibare (CBE). Shonibare was one of six artists commissioned by Royal Mail to produce original artworks for a set of Special Stamps issued to mark the 250th anniversary of the Royal Academy.

The Byres Road, Glasgow postbox features an image of Walter Tull, who had signed on to become the first black player for Rangers, before being tragically killed in action in his post within the British Army (where he was the first black officer to command troops in a regular unit). He featured in a set of stamps released in 2018, to mark the end of the First World War.

The King Edward VII Avenue, Cardiff box features nurse and businesswoman Mary Seacole, who featured on a set of stamps released in 2006 to celebrate the 150th anniversary of the National Portrait Gallery. Seacole nursed wounded British soldiers back to health during the Crimean War (1853-1856) and built a dedicated place for them to recuperate known as the British Hotel.

Artist Yinka Shonibare, CBE, who created the painting that features on the London box, said: ‘It was a pleasure to work with Royal Mail on a national postage stamp in celebration of the 250th anniversary of the Royal Academy. As a citizen of the commonwealth, it was particularly important to me to be making a visible contribution in a historic public space.’