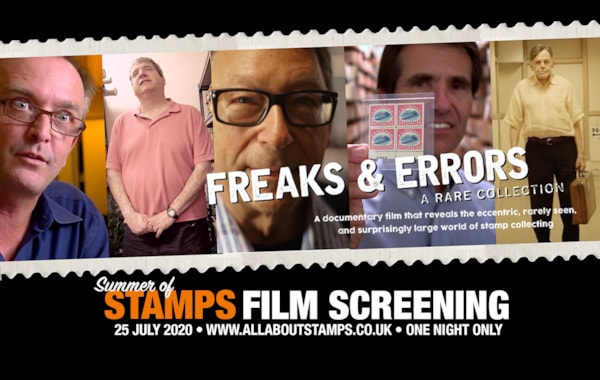 Don't miss the exclusive screening of the acclaimed documentary Freaks & Errors: A Rare Collection, right here, on 25 July 2020, as part of the Summer of Stamps virtual festival…

Interviews with columnist and author Neil Steinberg, footwear guru Stuart Weitzman and bond king William H. Gross, in addition to an enthusiastic collection of life-long stamp collectors, the film is a commentary on how we’re all searching for ways to express ourselves, make order out of chaos, and to connect with one another through our hobbies.

Freaks and Errors: A Rare Collection from Gravitas Ventures on Vimeo.

The exclusive screening will take place at 5pm on 25 July - right here!
Keep updated with the Summer of Stamps festival – just sign up to the allaboutstamps newsletter

There a was a time when the world used to be a much smaller place. Not long ago, one of the only ways to get a glimpse into the culture, people, art, geography, history, music, and literature of lands that exceeded your own border, was to receive a piece of mail.

Receiving a stamped letter would ignite one's imagination and postage stamps quickly vaulted into the spotlight becoming the stars of the world's most popular hobby, as well as a cultural phenomenon for roughly 150 years.

‘Freaks & Errors: A Rare Collection,’ follows a group of collectors that at first glance, seem to have only one thing in common, the love of stamp collecting. A closer look though, reveals a slew of familiar traits that connects them to one another and uncovers the all-consuming influence that the hobby has had in defining many aspects of their lives.

As we weave through their stories, we see collecting as a catalyst for friendship and community in a world where modern shifts in work/life dynamics, family structure, digital media, and other factors threaten the relevance of all hobbies.

Mark is a commercial and film director. He has a BFA from DePaul University and worked for 15 years as an art and creative director in the advertising world. He is the founder of Mutiny Motion Pictures, a film production company that develops long and short form documentary work and branded content. He lives on the Lower West Side of Chicago and has the largest stamp collection that any non-stamp collector should have.

Alex Cheng is a Chicago-born and raised filmmaker. He has a BA for film from Columbia College Chicago. He is a recipient of the George Foster Peabody Award for his team’s contributions to the documentary “Beyond Borders: Personal Stories from a Small Planet”. His work has screened on PBS and the Independent Film Channel. He lives in the Humboldt Park neighborhood of Chicago with many cats.

The exclusive screening will take place at 5pm on 25 July - right here!
Keep updated with the Summer of Stamps festival – just sign up to the allaboutstamps newsletter