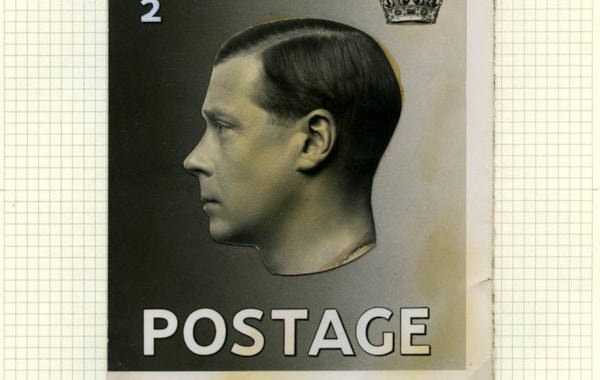 The Postal Museum's extensive archives include details and images of many stamps, essays and rejected designs, as the first of a five-part festival series explains, focussing first on the material issued during the short-lived reign of Edward VIII

Although only four postage stamps were issued for the reign of King Edward VIII there is still a wealth of material in The Postal Museum collections. There are registration sheets for the stamps in normal sheet format, some overprinted for the Morocco Agencies and Tangier.

Others are as prepared for various types of issued booklets and rolls. All, except the overprinted ones, are imperforate.

The display at The Postal Museum includes the Edward VIII accession artwork and essays and a cast and essays for the proposed coronation stamps.

The September 1936 accession stamp was based on a simple design by a 17-year old schoolboy Hubert Brown and incorporated a photograph of the King by Hugh Cecil. The coronation stamp was not issued following Edward’s abdication. Eric Gill developed the design based on a plaster cast of a crowned King Edward VIII by Percy Metcalfe.