Inside The Postal Museum, Part 2: The Penny Black 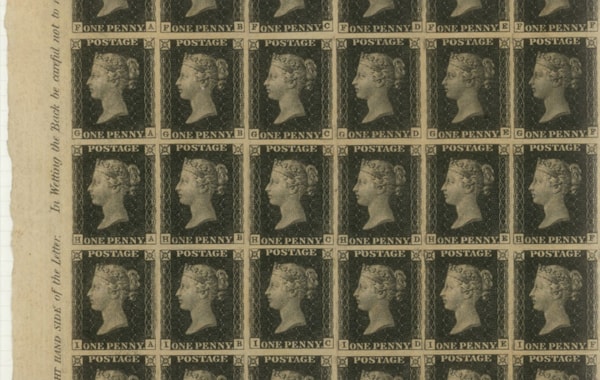 The Postal Museum's extensive archives include details and images of many stamps, essays and rejected designs. In this second guide we take a look at perhaps the most famous stamp of them all, the 1840 1d black, better known as The Penny Black…

'… A bit of paper just large enough to bear the stamp, and covered at the back with a glutinous wash.'

This was the first mention by Rowland Hill of what became the world’s first adhesive postage stamp. He was answering the questions of a parliamentary enquiry into the Post Office in February 1837 shortly after the publication of his pamphlet Post Office reform; Its Importance and Practicality.

The eventual plate for the 1d label – The Penny Black – was ready on 1 April 1840 and a proof impression was taken from it that day.

The display at The Postal Museum currently includes one of the first registration sheets of the completed Penny Black along with an 1838 medal by William Wyon, an 1840 master die and unused Twopenny Blue stamps.

Printed by Perkis Bacon each row and column on the registration sheet had a different corner letter to help prevent forgery. The Penny Black stamp portrait of Queen Victoria was inspired by a silver medal produced by William Wyon to commemorate a visit by the Queen to the City of London. Charles and Frederick Heath created the March 1840 ‘Old Original’ master die from which the printing plates for all Penny Blacks and many later Penny Red stamps were created. Corner letters were punched into the plates by hand.

The Twopenny Blue was the companion stamp to the Penny Black for heavier letters over half an ounce (14g) in weight.

Both the medal and the Twopenny stamps are part of the RM Phillips Collection of British Victorian stamps.