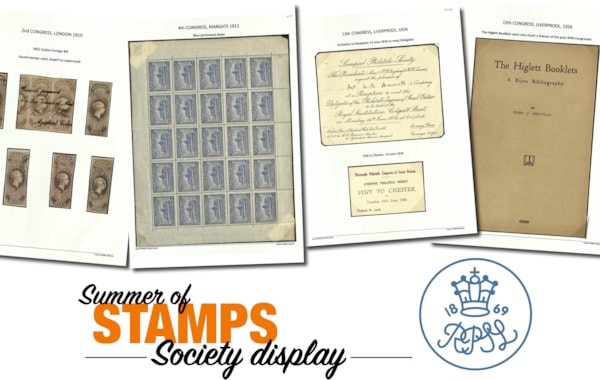 This exclusive RPSL display, by the late Francis Kiddle FRPSL, examines some of the philatelic souvenirs produced to celebrate the holding of the Philatelic Congress of Great Britain, focussing on the events held between 1909 and 1914.

The first Philatelic Congress of Great Britain was held in conjunction with a stamp exhibition in Manchester in 1909. Since then, they have been held annually with the exception of the war years. Nearly all Congresses have had a special postmark and many have had special souvenirs of a philatelic nature, printed in many cases by the country's leading postage stamp printers.

How to view the exhibit

This exhibit shows examples of most of the souvenirs for the Congresses held between the first (1909) and the last before the start of World War I (1914). Many of the leading philatelists attended these Congresses, and as you would expect with a group of philatelists getting together, attempts were made to provide even more philatelic items than were officially issued!

Besides the philatelic items, wherever possible, items have been collected of Ephemera, as these represent the social history of the time from Banquet Menus, to admission tickets, to newspaper cuttings — all are part of the Congress story.

The exhibit of 8 frames (128 pages) is but a small part of a very large collection that has been built up over 40 years. It includes other significant collections deg RAG Lee, Rosemary Green, Marjorie Humble, Ernest Hugen — all names very much associated with Congress.