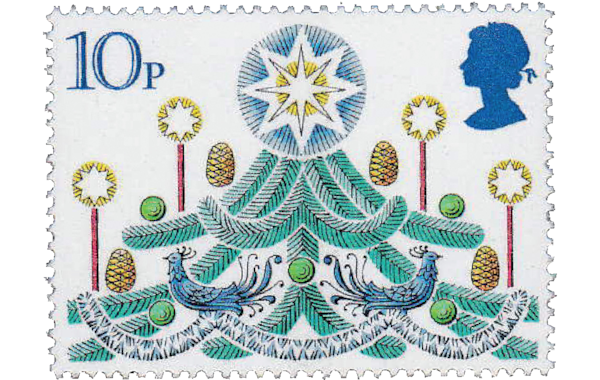 When he became Postmaster General in October 1964, Tony Benn suggested seasonal stamps be issued the following year, prompted by repeated requests from the general public for Christmas stamps.

However, officials within the Post Office were adamant that Christmas stamps could not be issued as they did not meet the existing criteria for special stamps (although Christmas aerogrammes were first issued in 1965).

Benn had his own views, so when he put forward his programme of special issues for 1966 it included a set for Christmas – and has remained an annual feature ever since.

In his plans for 1966 Benn thought that the designs for the Battle of Hastings set should be the result of a competition among schoolchildren.

Those responsible for stamp design within the Post Office thought such a competition much more suitable for the Christmas set. Over 5,000 entries were received, judged by a team of eight stamp designers. Britain’s first Christmas stamps were issued on 1 December, fifty years ago, the designs showing The King of the Orient, and a Snowman, submitted by Tasveer Shemza and James Berry.

Reactions to the set were mixed, although the idea of using children’s designs was repeated in 1981 and 2013. Given that, among the special issues of the year, Christmas sees the greatest use, it is hardly surprising that the stamps come in for the most comment. A design that proved controversial in recent years was the 68p issued in 2005 showing the Madonna and Child, from a 17th-century painting that hangs in Bombay, which caused some disquiet among Hindus.

The pattern that has developed of alternating religious and secular themes seems to satisfy most, although finding original design concepts each year remains a challenge. Since 2007, when two separate designs depicting the Madonna and Child were issued, a religious option has been available every year. But not all believe that religious designs are appropriate, so in 2013 two sets were again offered, one depicting paintings of the Madonna and Child, accompanied by a second set using children’s paintings, planned very much at the eleventh hour.

The designs of Britain's Xmas stamps

A glance through the stamp catalogues shows that Royal Mail manages to find a fresh approach every year. Themes chosen have included religious paintings (invariably detail from paintings), the Christmas story and celebrations, Angels, stained glass windows, Christmas carols and songs (with sets devoted to ‘Good King Wenceslas’ and ‘The Twelve Days of Christmas’), Father Christmas, Christmas decorations, Pantomime, Christmas Cards and Robins, through to the more unusual Ice Sculptures and Wallace and Gromit.

A break from the ‘formal’ Christmas set came in 1999 and 2000. Royal Mail decided to mark the new Millennium with a series of 25 sets spanning the two years and concluding in January 2001. The original intention was that there would be no other special issues during this period.

However, we all know what happens to the best laid plans: Prince Edward’s wedding and The Queen Mother’s 100th birthday both demanded separate issues. Thus for 1999 we saw four stamps styled ‘The Christian’s Tale’ issued on 2 November, and in 2000 a further four stamps marking Millennium projects on the theme of ‘Spirit and Faith’, issued on 7 November, fulfilled the need for Christmas stamps those years.

Prior to 2001 self-adhesive stamps had only been available from Royal Mail in booklets.

That year the first such stamps in normal sheets were issued – for the Christmas set. As counter clerks were not familiar with handling self-adhesive stamps in sheets, special labels were produced by the printers De La Rue.

Depicting the De La Rue logo, these were in the same size, with simulated perforations and rouletting of the backing paper, as the Christmas issue, sent to staff for familiarisation. As with the issued stamps, the excess paper around the stamps was not removed as part of the printing process. All subsequent Christmas stamps have been self-adhesive; however, since 2004 a miniature sheet combining the stamps has also been issued each year, these having standard water-soluble gum.

From 2003 the excess paper around the stamps has been removed making stamps easier to remove from the backing paper. Each year Royal Mail staff receive a gift of fifty 1st Class stamps, but these do not have the excess paper removed (normal stamps were provided in 2013).

In 2006 came another change, the size of the Christmas stamps becoming the same as the standard definitives, including the introduction of ‘Large’ versions as part of the ‘Pricing in Proportion’ scheme launched that year. The demand for this change came primarily from Post Office Counters, wishing to align the Christmas stamps with standard definitives in view of their high usage.

However, keeping the format to definitive size does put a constraint on designers and can detract from the designs, so a compromise has been reached. From 2012, while the designs retain definitive ‘proportions’, they are slightly larger.

Since the introduction of Smilers stamps in 2000, each year Christmas designs have been available.

Back in 1966 multicoloured stamps were still novel for the British Post Office. Consequently missing colours were not unusual. By the mid-1970s such errors became less common. Imperforate errors continued to appear, the most recent being the 2nd and 1st Class values of 2002, found with both the simulated perforations and rouletting omitted.

However, an error that some might still be unaware they own occurred in 1988. Sometimes stamps are printed, only for a change of tariffs to be introduced before they are released. The stamps have to be printed afresh with revised denominations. This happened for Christmas 1988. Stocks had been printed of the lowest value as 13p, but the rate was increased to 14p before issue.

While most of the 13p were destroyed, some had been used to make up the Year Books for 1988. Collectors prefer that Year Books remain unopened in their cellophane wrapping. Do examples of the error still exist in unopened Year Books?

While some may now question the need for special stamps, even definitives, the demand for Christmas stamps goes unabated.