Europa stamps 2019: National Birds - a look at some of the first on the theme 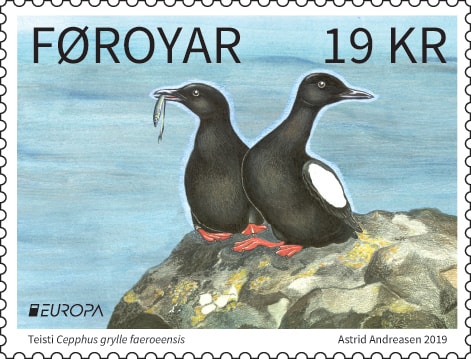 We take a look at some of the first stamps issued for the 2019 Europa theme National Birds.

Some of the first stamps on this year's theme didn't feature ‘official’ national birds but rather typical birds from different parts of our continent.

Let’s start our trip with Russia which, once again, was the first country to issue their Europa stamp. In January they issued a stamp depicting a Siberian Crane with a chick. The stamp uses augmented reality, giving you the chance to see the crane fly and hear his singing via a mobile phone.

In February the Isle of Man issued a Europa stamp depicting a Stonechat. This stamp is part of the ‘Isle of Man Wildlife’ ten-stamp set with images captured by Manx photographer Brian Liggins who has spent more than ten years capturing the Island’s birds and wildlife on film.

The same month, San Marino issued two stamps depicting the Peregrine Falcon. You can see the Fortress of Guaita in the background of the stamps, one of the three towers constructed on Monte Titano.

In March, another micronation issued their Europa stamps, the Alpine Principality of Liechtenstein. This small country chose the impressive golden eagle with a stylised design that works very well. Finlly, the Faroe Islands issued two stamps depicting the Black Guillemot, chosen since it is commonly found close to the coast around all eighteen Faroese islands.