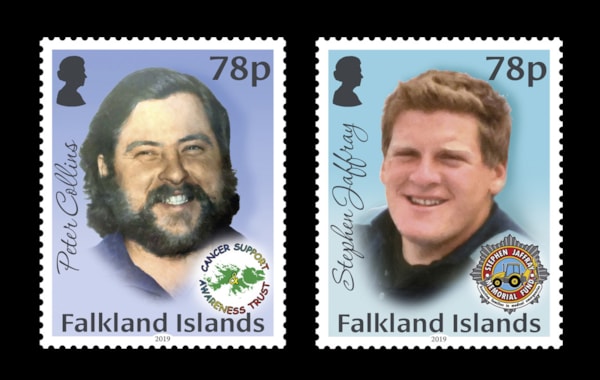 The Falkland Islands are marking the 25th Anniversary of the official forming of the Cancer Support & Awareness Trust, and The Stephen Jaffray Memorial Fund with two special 78p stamps.

A statement said: 'The trustees are delighted that this can be commemorated with a stamp issue bearing a photograph of Peter, along with the Stephen Jaffray Memorial Trust stamp issue, another fantastic local charity which commemorated its 25th anniversary in 2018.'

The Cancer Support & Awareness Trust (CSAT) was the brain child of Peter Collins who suffered from breast cancer and lived on the remote Pebble Island with his wife and family, without access to a library or any chance to find out more about his diagnosis.  He was determined that this should not happen to anyone else.

A Trust deed was drawn up with the help of a local solicitor in 1994 and was named “The Cancer Support and Awareness Group” which later changed to Trust (CSAT).

Sadly, after Peter passed away in England, his wife Shiralee found she had a very high phone bill because of trying to keep her family in touch with their father; so, a new reason to fundraise was agreed to purchase telephone cards for patients sent overseas to keep in touch with their families in the Islands.

As technology advanced mobile phones were bought and loaned to patients sent overseas and fax machines were made available to the families who remained here, all provided by kind donations within the community.

Now run by eight volunteer Trustees, the Trust also offers financial, practical and emotional help and support to anyone affected by cancer in any way, including family and carers.

The Stephen Jaffray Memorial Fund was set up in 1993 in memory of young Falkland Islander Stephen Jaffray who sadly passed away in 1992 aged 21. Stephen had to be airlifted to Montevideo, which cost a lot of money to send and keep his family with him during this time.

Stephen’s wish was to raise money to help assist other families who are in desperate need to be with their sick, close relatives in their time of need who do not have the finances to assist them.

Stephen’s family decided to start the charity in honour of his wishes and has now been a successful ongoing charity for over 25 years, helping many families over this time. So far, the charity has spent over £300,000 assisting families with flights and accommodation and is one of the most popular charities in the Falkland Islands and hopes to continue the ongoing support.