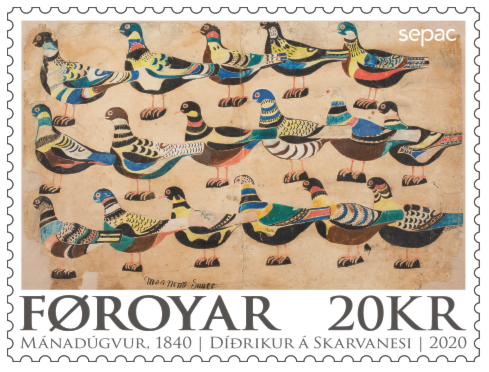 The Faroe Islands Sepac Stamp Issue for 2020 features a row of brightly coloured, all in profile, slightly shifted to the rear of each other, each on its own small elevation. Strong yellow, blue, green and red fields light up in between the brown and black surfaces of the birds’ plumages.

Even if the patterned colour surfaces lend the arrangement a decorative touch, we clearly note that the subject matter is pigeons. And should you have any doubt, the stamp sheet carries the inscription: “Moon Pigeons”, a title indicating the fantasy world to which these pigeons belong.

The fragile images on paper is one of four having survived time by something of a miracle. These images were created during the first part of the 19th century. They were originally mounted in a glass frame and hung up in the living room of a family at Sandoy.

However, due to stove heating the frame fell apart and the sheets were preserved in an old Bible. They were then totally forgotten until they finally reappeared and were sold to the Faroese Art Society in 1954.

A fifth and final picture later found its way to the Museum’s collection as a donation from another branch of the family. Thanks to the family at Sandoy we know the name of the artist. He was one of the family’s ancestors, known as Díðrikur á Skarvanesi.

Due to the pictures’ age and artistic quality, Díðrikur must be considered the first Faroese artist, creating his works some hundred years before “Faroese art” became a recognised concept starting with the renowned painter Samuel Joensen-Mikines and his successors.