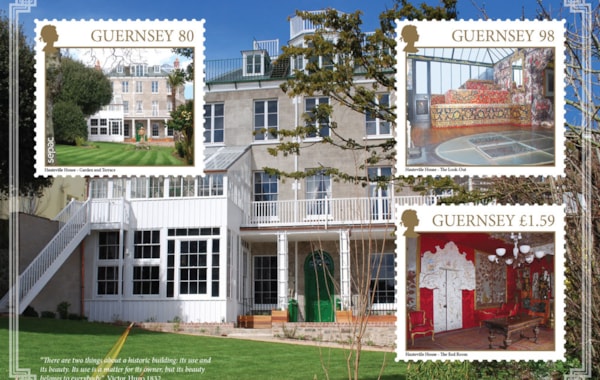 Victor Marie Hugo bought Hauteville House in St Peter Port in 1856 after being exiled from France for opposing Napoleon III in 1851 and moving to Guernsey in 1855 via Brussels and Jersey.

The poet, novelist and dramatist spent 14 years living and working here, writing some of his famous masterpieces and re-designing the space around him.

His work includes Les Miserables and The Hunchback of Notre Dame.

Hauteville House is inscribed on the island’s Protected Buildings List but, despite regular maintenance work, the big house had started to lose its shine. Thanks to a billionaire art collector, who donated more than £2.5 million, Hauteville House has now undergone extensive work to restore the building and its décor to their original state.

Hauteville House re-opened in April 2019 and this miniature sheet depicts three of the areas that underwent major restoration work.

80p (EUR 20g Letter) with the SEPAC logo features the garden terrace and rear of the house now looking as it would have done in Hugo's day.

98p (ROW 20g Letter) depicts the look-out where Hugo worked on some of his famous books such as Les Miserables.

£1.59 (EUR 100g Letter) depicts the restored Red Room, one of the rooms where Hugo and his family greeted guests.

Also available is a presentation pack, postcards and first day cover. To order, visit the website.