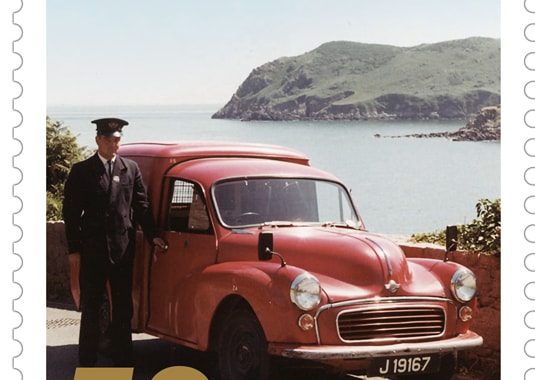 We take a look at eight new stamps that profile five decades of Jersey Post, in a 'then and now' format.

Fifty years ago, Jersey Post was fundamentally a postal operator delivering traditional mail products to its customers. Today it is a global logistics business for which delivering mail is only one of a number of services offered. Four se-tenant pairs of stamps show the growth and change that has occurred since 1969, when the British Post Office became a corporation and Jersey gained its postal independence from Britain.

Available individually and also presented as se-tenant pairs, four of the eight stamps have been created using imagery from Jersey Post’s photographic archive, while the other four have been specially created to show Jersey Post’s current operation. Together they cover the mail network, mail sorting, the transport of the mail and counter services.

The transportation methods used by postal operatives have changed dramatically over the years, from the first postal delivery workers completing rounds on foot, to modern day environmentally friendly vehicles. The first stamp in the se-tenant pair shows an early delivery van at Bonne Nuit, on Jersey’s northern coastline. The second stamp depicts Jersey Post’s newer electric vehicles, which won the Green Fleet Award ‘Private Sector Fleet of the Year’ (small to medium), in the east of the Island.

Until 1991, when an automated machine was installed, all letters processed by Jersey Post were sorted by hand, as shown in the first stamp (circa 1970). In 2014, Jersey Post invested in a high performance letter sorting machine and this was followed in 2015 with the installation of a bespoke automated parcel sorting machine. This technology can be seen in the second stamp. The se-tenant pair shows the advances to the speed and accuracy that have been made in letter and parcel sorting over the past fifty years.

Counter Services ‘Then and Now’ – 99p

As was the case fifty years ago, Jersey Post retain an efficient customer counter service and this has now been supplemented with new technologies, such as automated machines which allow for people to speedily weigh and pay for a parcel themselves. The second stamp of the se-tenant pair portrays the self-service kiosk which enables customers to avoid queues. The first stamp shows the traditional face-to-face counter service dating back to when the post office first gained independence.

One of the most drastic changes over the last fifty years is the decline in local mail and the upturn in global parcel services. The photograph on the first stamp captures a postman with his bike on his local postal round, shortly after postal independence. The second stamp shows a cargo aircraft, working with Jersey Post, to transport international parcels to and from the Island, highlighting the now global network.