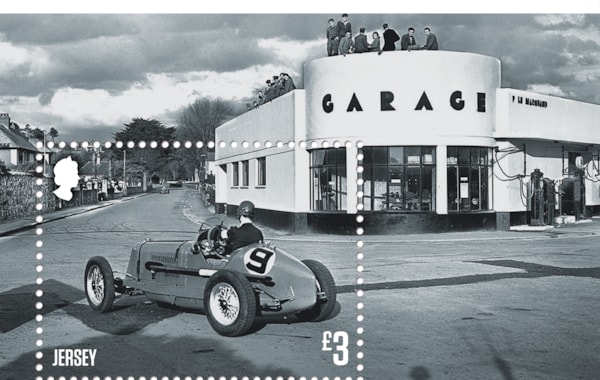 2020 marks the 100th anniversary of the Jersey Motorcycle & Light Car Club (JMC&LCC), and jersey Post are celebrating the anniversary with a set of eight stamps and a miniature sheet.

Persuaded to move to Jersey by his brother-in-law in 1919, motorcycle enthusiast H.W. Rawnsley-Gurd, arrived in Jersey to find there was no established motorcycle club. After taking part as an observer at a reliability trial, as well as organising an impromptu hill climb, Rawnsley-Gurd brought together the Jersey Motor Cycle Club. At the first meeting of the club, at an office in St Helier, only six people attended, including the office boy.

The club had its first formal reliability trial on Easter Monday 1920, which proved to be a tremendous success. By the time of the club’s first general meeting, the membership had grown tenfold.

During the early years of the club, two men had differing predictions as to how the club would progress. The first, Mr. David Cope, generously donated a trophy, known to this day as the Cope Cup, believing his name would be carried on for years. The second of these men was a Deputy in the States of Jersey and a keen motorcyclist. One day, Mr. Rawnsley-Gurd caught the Deputy in the Royal Square of St. Helier and asked him to join the club.

The Deputy replied, ‘Thanks for asking me my boy, but I’m afraid I could not be associated with your club. You see it is quite impossible to run a motorcycle club on the Island. You’ve made a start, but mark my words it will die out in six months.’ The Cope Cup continues to be presented to this day.

The club holds four hill climbs a year at this venue, as well as the prestigious National Hill Climb, an annual competition which sees competitors from all over the United Kingdom and Channel Islands, as well as spectators.