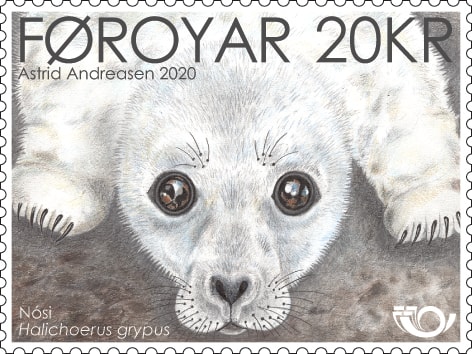 One stamp and a booklet with six self-adhesive stamps, from the Faroe Islands, feature an illustration of an 'alive and lovable' seal pup

Artist Astrid Andreasen has worked long and hard with her crayons. Her fertile imagination and nimble hands have yet again created a masterpiece. In her illustration the seal pup looks alive and lovable. Astrid is a master of portraying a wide variety of natural subjects, especially those of the sea and the ocean floor.

Over 30 species of seals are found worldwide. In Faroese waters we know of seven species, including the walrus (Odobenus Rosmarus).