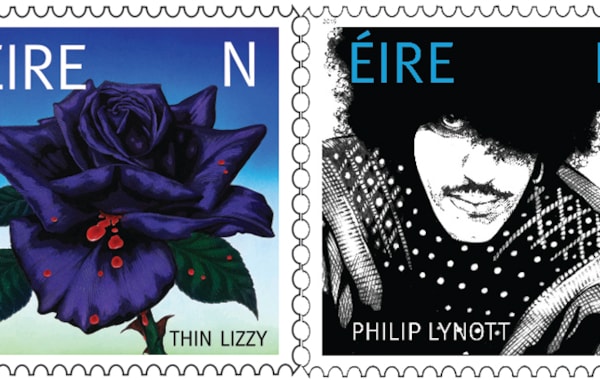 Ireland have issued two stamps to mark fifty years of the rock group Thin Lizzy, famous for hits including ‘The Boys are Back in Town’ and ‘Whiskey in the Jar’.

The stamps were unveiled in Bristol by the daughters (Sarah and Cathleen), grandchildren and ex-wife (Caroline) of the band’s late frontman, Phil Lynott. The two national rate €1 stamps feature Thin Lizzy’s Black Rose album cover and a portrait of Phil Lynott by Irish artist Jim Fitzpatick and were designed by Steve Averill.

Issues with the issue date

However, not everyone is happy with the stamp release, or at least its timing. According to the Irish Independent the band’s manager insists the anniversary should be marked in January 2020 and not this year. Terry O’Neill told the Irish independent: ‘They could have changed the dates. It was a simple enough thing to do… Most musicians throw diaries away but I was there and know when Thin Lizzy started and it was January 1970, not October 1969.’ An Post have insisted that they are correct to honour the band this year and not in 2020.

Thin Lizzy garnered a loyal worldwide fan base, attracted to their distinct twin guitar sound, explosive drums and legendary frontman, Philip Lynott. One of the greatest bands to come out of Ireland, Thin Lizzy remain giants of Irish rock, decades after they first came together in 1969.  Designed by Steve Averill, the stamps are based on the iconic artwork of Jim Fitzpatrick and cover standard postage within the island of Ireland.

Jim Fitzpatrick, one of the most celebrated and internationally known Irish artists of his generation, most famous perhaps for the two-tone portrait of Che Guevara created in 1968, said: ‘I am thrilled to have my artwork included on the stamps. I am immensely proud that my 1979 Black Rose album cover illustration and a portrait drawing of Phil that, incidentally, formed part of the back cover of that album feature on the stamps. Never in our wildest dreams while working together would Phil and I have imagined that, one day, we would be acknowledged on a national stamp! It’s a great honour, made extra special because another friend of mine, Steve Averill, famed for his U2 album cover artwork, designed the stamps.’