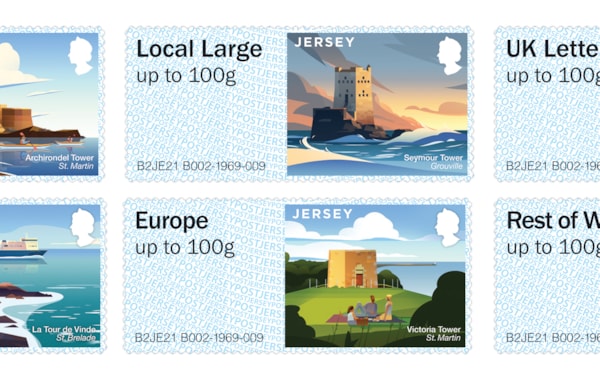 Six new stamps from Jersey feature fortifications that define Jersey’s coastline. From Georgian and Victorian era battlements intended to defend the Island from French invasion, through to concrete strong points constructed around the coast by the occupying German forces during the Second World War.

An example of Jersey’s Conway coastal defence towers, developed by General Conway, Archirondel Tower was to have been one end of a giant harbour which in the middle of the 19th century would have provided protection from the French Navy for vessels of the English Navy’s Channel fleet, and other shipping. The harbour itself was never completed.

The Marine Peilstand 3 tower is the focal point of Batterie Moltke, an uncompleted wartime artillery battery built by German forces. One of nine planned towers in Jersey, MP3 was designed for use in observing targets at sea in order to direct guns of the battery covering Jersey’s coastline and the stretch of water between Jersey, Guernsey and Sark.

Seymour Tower stands two miles offshore from La Rocque, on the south east coast of the Island, in a rocky section of an internationally recognised RAMSAR wetlands site on the south east tip of Jersey’s National Park.

La Tour de Vinde, (aka Noirmont Tower) is a Martello tower that the British erected between 1808 and 1810 to command the approaches to St Aubin’s Bay, Jersey. The name comes from the Norse, where “vinde” means to tack or go about. Once a sailing vessel heading for St Aubin’s Bay had passed the point it could tack to approach the harbour.

Situated on a hill-top, Victoria Tower overlooks Anne Port Bay, St Catherine’s Breakwater and Mont Orgueil Castle. Built in 1837 to safeguard the approaches to the castle, this fortification was one of the last Martello towers to be built in Jersey.

Originally known as Fort Gordon, La Rocco Tower was built between 1796-1801, the 23rd and last coastal tower in Jersey in the Conway design. It has been an iconic Jersey landmark for over two centuries, and cannot be missed when visiting the bay.