Jersey Stamps: Tales from the Sea 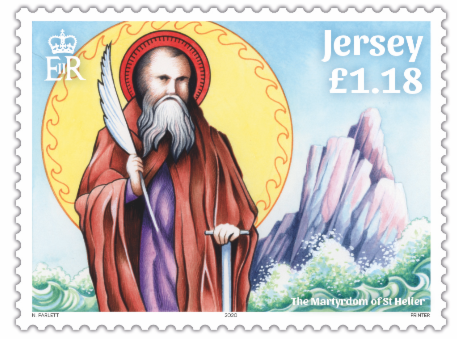 As an island, Jersey’s culture, identity and history have all been moulded by the ocean. As such, it is no surprise that a lot of Jersey’s myths and legends take place on the Island’s coastline. Six of these tales are illustrated on a new set of stamps.

The Bull Among the Rocks

Fishermen used to talk of a bull that roamed around the rocks on the southern coast of Jersey during low tide. People refused to go down to the beach as they could hear the bull roaring. One brave fisherman trudged out during low tide, following the bull’s roar. He found a rock pool that had eroded and formed a pipe. As the tide went out, the water was sucked down the pipe, making a gurgling noise. The gurgling noise reverberated loudly off the rocks, making the eerie sound of which the Islanders were so afraid. The fisherman filled up the pipe and islanders can no longer hear the bull among the rocks.

Legend of the Plank

Some believe there was a time when all that separated Jersey and mainland France was a three foot stream. The Bishop of Coutances was from France but he also held Jersey in his diocese. According to legend, all he needed to cross from France to Jersey was a three foot plank. However, in 709 AD, a violent storm flooded the area between Jersey and France, submerging large swathes of woodland. The Bishop could no longer use a plank to make the crossing.

A rock known as Le Saut Geffroy, or Jeffrey’s Leap, can be found on the southern coast of Jersey. It is said to be an ancient site where criminals were thrown from a large rock, into the sea and to their deaths. Legend has it that a man named Jeffrey was found guilty of a crime and was sentenced to be thrown from the rock. To the surprise of the onlookers who had gathered to watch, he survived the fall and swam back to shore. Convinced that he had been saved by God, Jeffrey jumped again. This time, he was not so lucky and perished on the rocks below.

Spanish Ship on the Rocks

On the west coast of Jersey, during the 15th century, ‘salvagers’ purposefully wrecked Spanish ships for the loot by using fires, meant to guide the ships to safety, to guide them into dangerous rocky seas. An old man on board one of the ships begged the salvagers to save his daughter, but they did nothing to help. The old man cursed the wreckers, saying that they would all be drowned within the year. A year on, the ship wreckers were enjoying a huge feast to celebrate the fact that they had beaten the curse, when they were dragged into the sea by a mighty storm.

Also known as the fairies’ bath, Lavoir des Dames is a mysterious rectangular hollow in a rock on Jersey’s north coast. Legend has it that beautiful fairies bathe in the hollow. However, if a person sees them, they will be struck blind.

The Martyrdom of St Helier

Helier is a historical figure and the patron saint of Jersey. Helier lived the solitary life of a hermit on an offshore islet from which he could see Viking invaders. When Helier spotted invaders he would warn islanders to hide in a place of safety. One day, a group of raiders caught Helier and beheaded him. Helier picked up his own head and walked ashore. Helier’s body was eventually found and put in a boat to Bréville-sur-mer in France, where a healing spring arose.