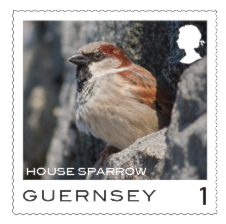 Guernsey Post’s philatelic bureau has announced the release of a new set of definitive stamps depicting some of the colourful birds found regularly in the Bailiwick of Guernsey.

The new designs follow the release earlier in 2020 of definitive stamps depicting some of the birds found on the island of Alderney.

Bridget Yabsley, head of philatelic at Guernsey Post said: ‘Guernsey’s diverse habitats provide a haven for visiting and resident birds. Despite its small size, over 200 species are recorded in the Bailiwick each year and the islands see around 80 breeding bird species including quite a few rarities.

‘We’re really excited to feature some of these colourful birds on our latest definitive stamps, from garden visitors and waders to birds of prey.’

Birds featured on the new stamps

The stamps depict a House Sparrow (1p value), a noisy and sociable bird which feeds and breeds near people, whilst the colourful Greenfinch (5 p), another regular garden visitor, is distinctive for its twittering, wheezing song and flash of yellow and green as it flies.

Another garden bird is the Great Tit (3p), probably best known for its piercing song, which can often be heard in the spring and summer. The high-pitched twittering contact calls of the fluffy pink Long-tailed Tit (4p) get them noticed; the Song Thrush (6p) is both resident and migratory with some heading off to sunnier climes to winter there.

The most distinctive feature of a Pied Wagtail (2p), which can be spotted in gardens and on sea walls, is its ever-wagging tail. It is now a rare breeding bird but remains a common passage migrant and winter visitor to Guernsey.

Waders are a common sight on Guernsey’s beaches, including the tall Grey Heron (£1 stamp) with its long neck and legs and heavy dagger-like bill poised as it stands still for long periods stalking its prey. Meanwhile, depicted on the £4 stamp is the Northern Gannet.

During the winter migrant blackbirds (7p) arrive from Northern Europe to join Guernsey’s resident birds. At this time of year, they can often be heard singing to themselves in the undergrowth. Swallows (8p) are also migratory birds that fly several thousand kilometres each year after wintering in southern Africa.

The 9p and 10p stamps depict the Magpie and Common Tern respectively. The Lapwing (20p) is one of the largest waders and is also known as the Green Plover or Peewit (after its ‘pee-wit’ call); the Lesser Black-backed Gulls (£2) used to be a summer visitor, but an increasing number remain in the Bailiwick during the colder months too; and the Cormorant, depicted on the 30p stamp, is a large water bird with an almost primitive appearance, its long neck making it look almost reptilian.

Birds of prey are breeding well in the Bailiwick. It is common to see Buzzards (40p and 50p stamps) soaring over the islands: they have an impressive wingspan of around 120cm and weigh up to 1kg.