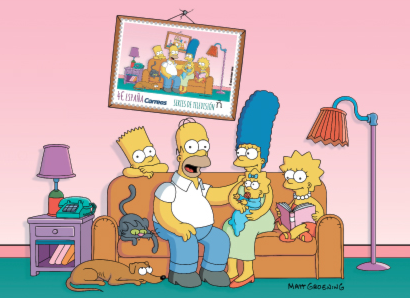 The Spanish Post Office, Correos, has issued a one-stamp miniature sheet celebrating the US animated television programme The Simpsons.

The new miniature sheet shows the famous dysfunctional family in the familiar setting of their sitting room, with the stamp resembling a picture framed on the wall.

In Spain, Los Simpson was first shown in a regular slot in early 1991 on La 2 de TVE, a year after its American debut.

The Simpsons has won many awards over its lengthy career, including 33 Emmys, 30 Annies and a Peabody. Time Magazine’s issue of 31 December 1999 called it the best series of the 20th century, and in 2000 it was awarded a star on the Hollywood Walk of Fame.

'For all these reasons, Correos is paying homage to the series with a mini sheet showing the Simpsons’ house on the front, as it appears in the famous intro.

The interior of the mini sheet shows the whole family on the living room sofa, including Snowball the family cat, and Santa’s Little Helper, the dog they rescued from the racetrack and who was the central figure of many episodes.

The stamp forms part of this image, taking the place of the picture of a boat which hangs on the living room wall, and instead showing a portrait of the whole Simpson family.'

The composition is completed by a phrase of Homer Simpson’s: “Remember, as far as anyone knows, we’re a nice, normal family.”

The USA featured the much-loved animated family on a set of five stamps in 2009, with each member of the family being shown on their own stamp.