Since the war in Ukraine began in February a growing number of post offices around the world have issued special stamps to lend support and, in most cases, raise funds for organisations helping with the country's humanitarian crisis. See the full list of stamps for Ukraine in our stamp guide.

The conflict in Ukraine has affected millions of people, and the response to the humanitarian crisis has prompted a response from around the world, including from post offices and stamp collecting communities. Nations to issue stamps include:

It is no surprise that Ukraine itself has issued defiant stamps in recent weeks. First was a provocative stamp showing a soldier greeting the Russian warship Moskva and, following the sinking of the ship, a new version has been issued with no ship featured on the design. These ‘Russian Warship… Done’ stamps will have an issue limit of 5 million. 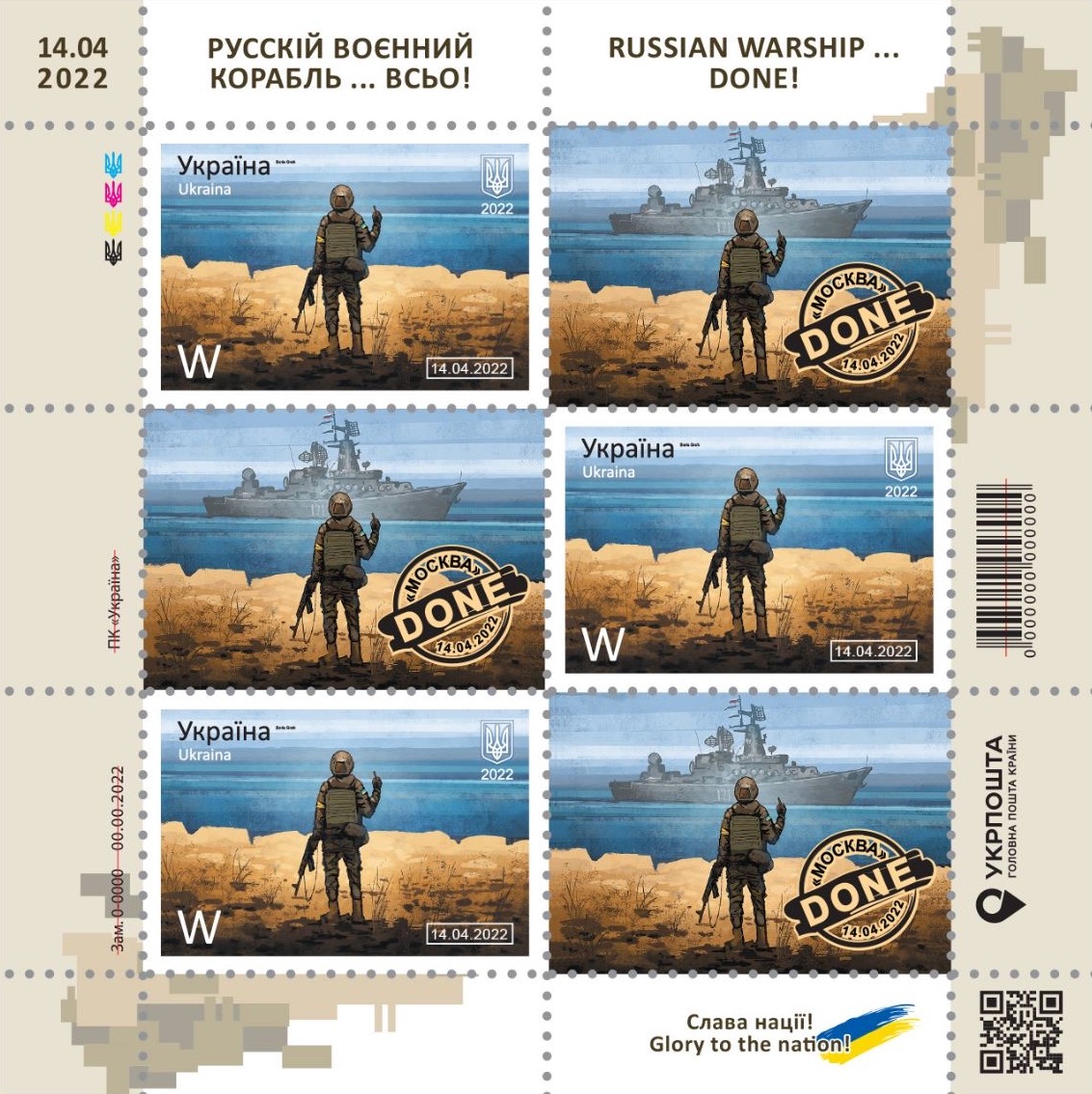 Latvia issued a block of three stamps, and ‘a special explanatory coupon’, in response to the Russian invasion of Ukraine, with half of the proceeds from sales going to the charity fund Ziedot.lv programme in support of Ukraine.

The stamp block features the national flags of Ukraine and Latvia, Ukraine’s Independence Monument in Kiev and Latvia’s Freedom Monument in Riga as well as inscriptions in Ukrainian and Latvian saying ‘We Are with You!’ and ‘Glory to Ukraine!’ 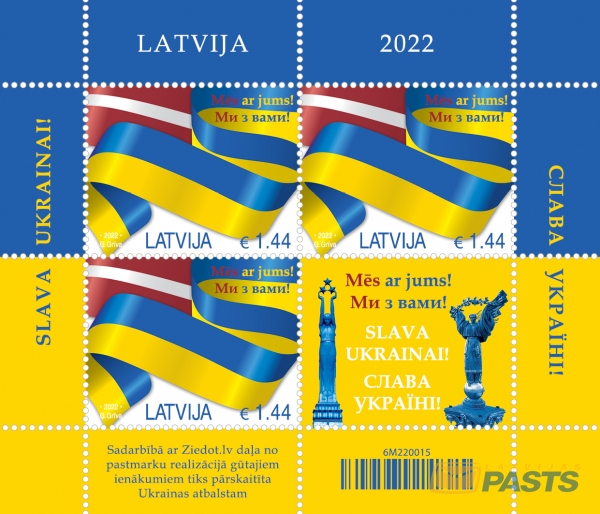 ‘Glory to Ukraine!’ stamp from Estonia

Estonia’s simple ‘Glory to Ukraine!’ stamp design shows a dove against a background of the Ukraine flag; a postcard with a similar design will be given for free with all purchases of the stamp. 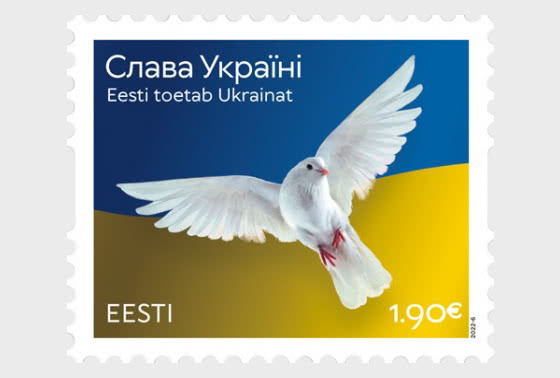 Poland's ‘We Are with You!’ stamp

Poland’s ‘We Are with You!’ stamp shows a handshake with the hands painted in the national colours of the two countries. 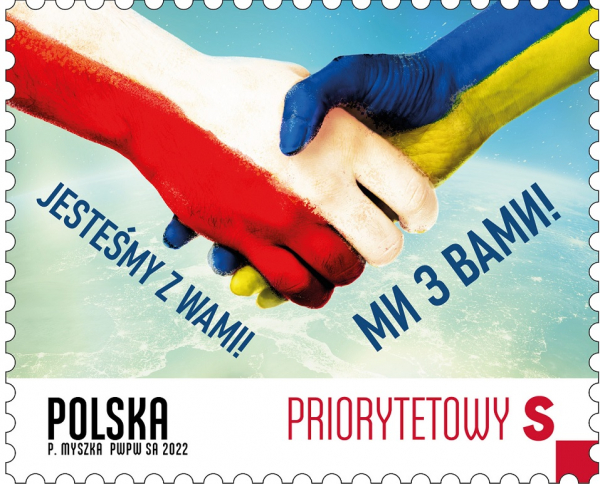 Canada Post has revealed the design of a fundraising stamp, set to be issued on 7 July, marking the first time Canada has issued a stamp in support of a country in need of humanitarian assistance.

Funds raised through the purchase of this stamp will be distributed through the Canada-Ukraine Foundation (CUF), which is currently delivering aid wherever it is needed, from heavily shelled areas in Ukraine’s north and east, to the displaced Ukrainians to the west and in neighbouring countries.

A donation of $1 from each booklet of ten stamps (and ten cents from each official First Day Cover) will provide much-needed financial assistance to those affected by the war.

The Canadian stamp shows a sunflower, the national flower of Ukraine and now a widely recognised symbol of peace and unity. Canada Post originally issued a stamp with this colourful image in 2011, with the 2022 version featuring the text ‘Help for Ukraine’ title. 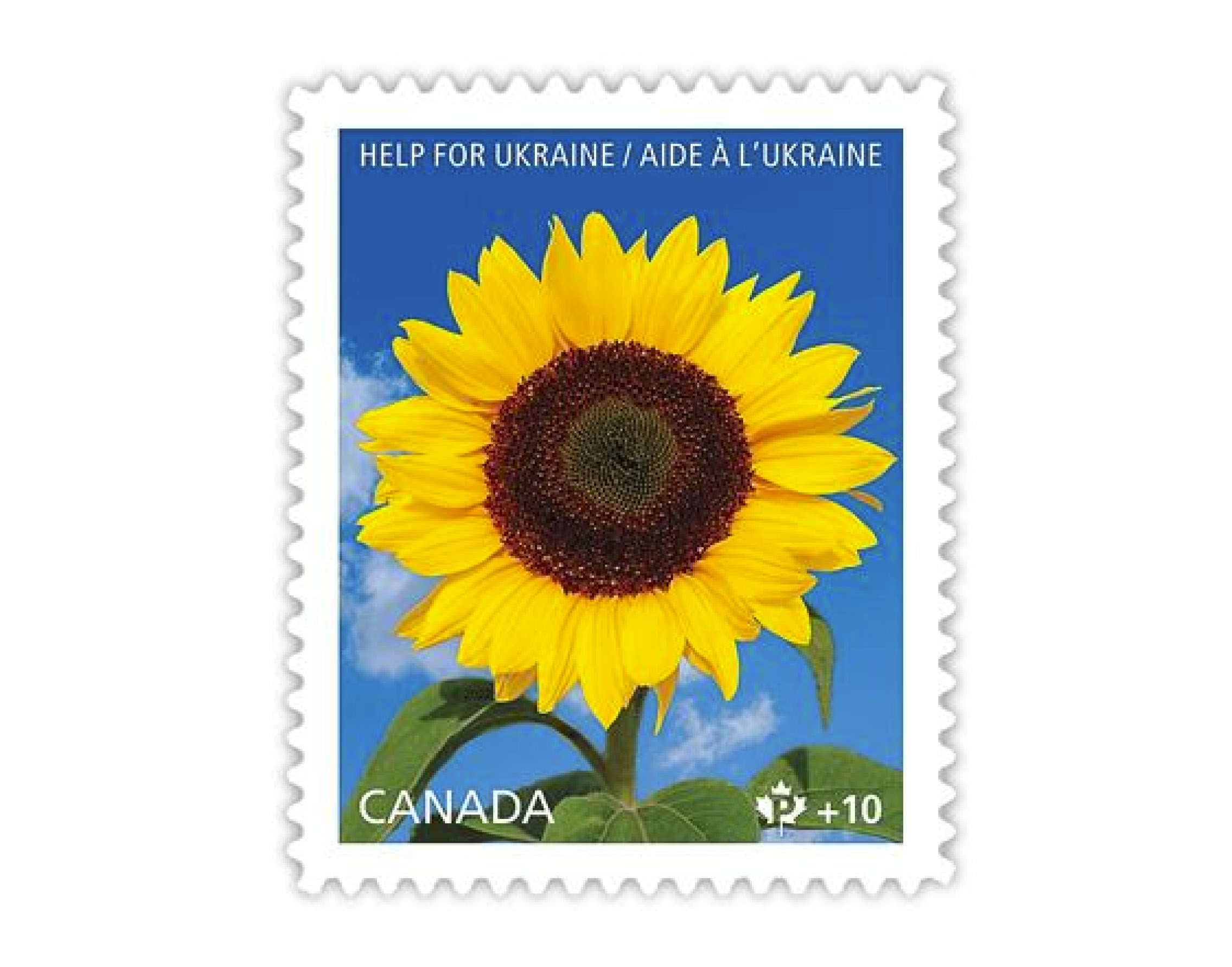 POST Luxembourg have also released a charity stamp, to help Ukrainian refugees. All proceeds from the sale of these stamps will be donated to the organisation ASBL LUkraine to support their actions for refugees from Ukraine.

The stamp, available in national and international denominations, in sheets of eight, features the colours of the Ukrainian flag with a dove of peace integrated into the design. 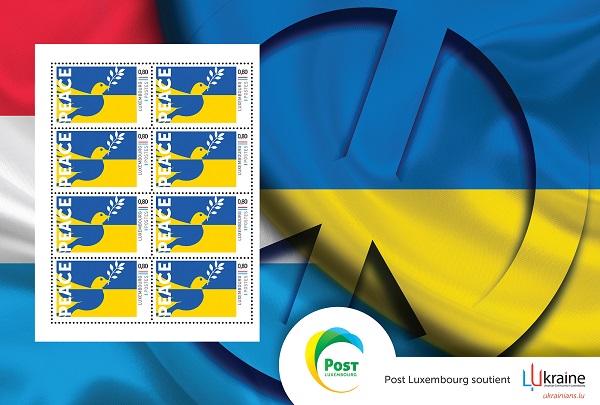 Lithuania: defenders of freedom in Ukraine

Lithuanian Post has also issued a single stamp for ‘defenders of freedom in Ukraine’. The simple image on the stamp again features the blue and yellow of the Ukrainian flag, and shows two figure hugging.

The €2 stamp is a semi-postal, with half of the stamp cost covering the cost of postage and the remaining €1 being donated to the organisation Mėlyna ir Geltona (Blue / Yellow), a ‘non-government organisation’ that ‘provides Ukrainian soldiers and volunteers with non-lethal supplies to help them battle Russian aggression.’ 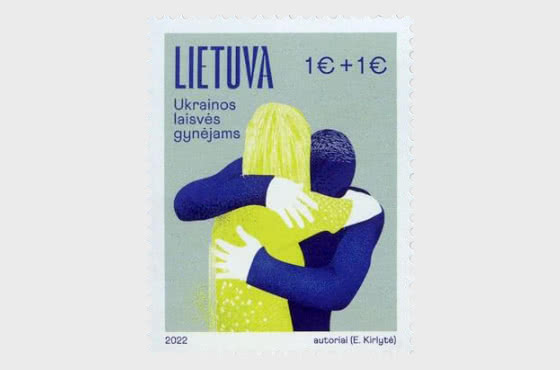 Croatia: For Peace in Ukraine

The stamp 'For Peace in Ukraine', issued by the Croatian Post features a simple design showing a rapeseed field below blue sky. The stamp is intended as 'an additional symbol of friendship between the Republic of Croatia and Ukraine, as well as strong mutual support for comprehensive efforts to bring peace to Ukraine, the return of its displaced and refugee citizens, and the normalization of life on the Ukrainian territory.' 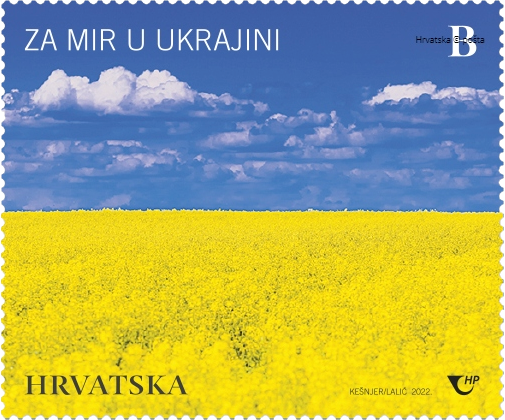 The semi-postal stamp issued by Österreichische Post is a semi-postal, meaning a proportion of the cost of the stamp - in this case €1 – will be donated to the Austrian organisation “Nachbar in Not” and the international organisation UNICEF. 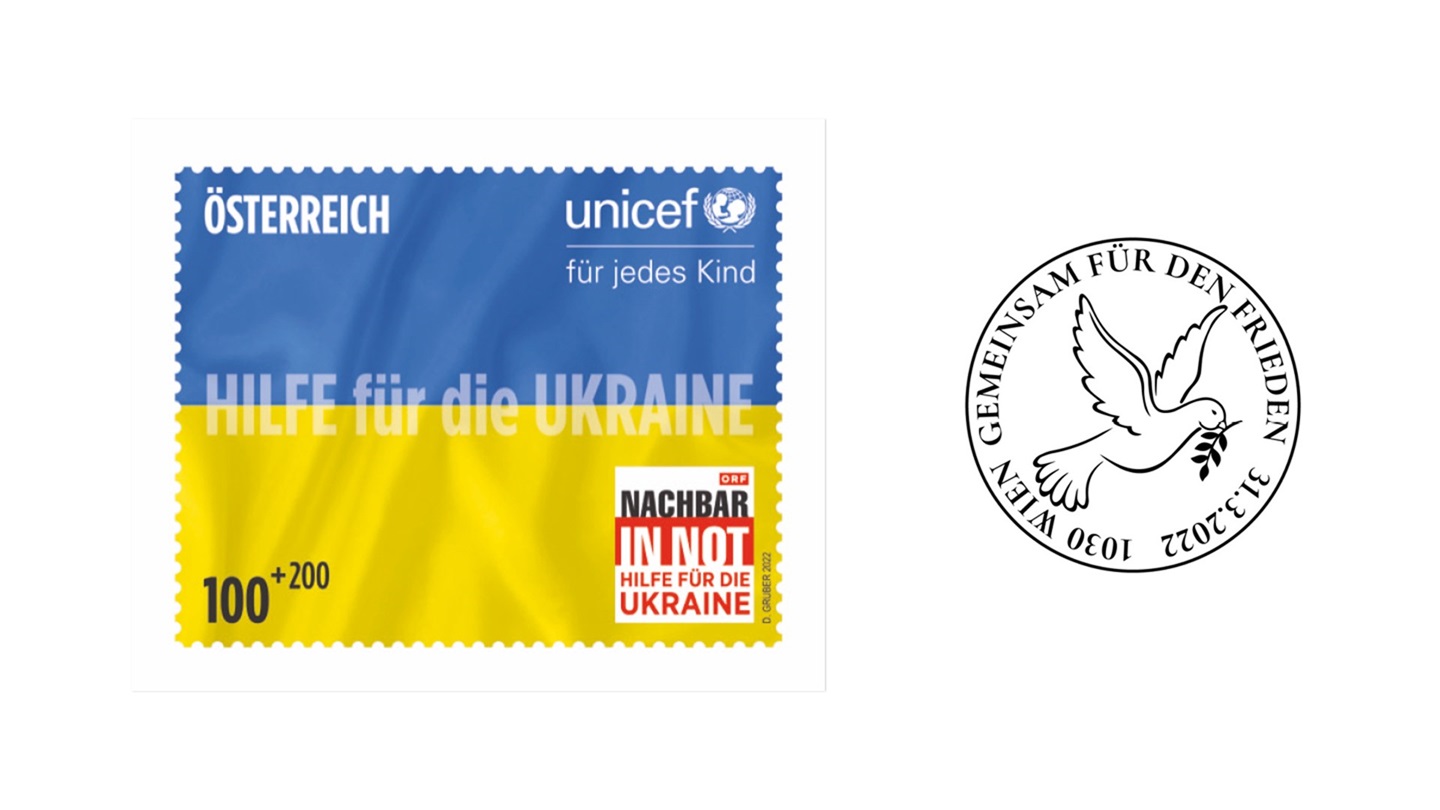 Moldova Post Office launched their stamp on 19 April with the aim of 'promoting peace in the world and in our homes through each letter sent.' Of the 250,000 copies of the stamp printed, 5,000 were given to refugees and volunteers, so they can send letters to those still in Ukraine. 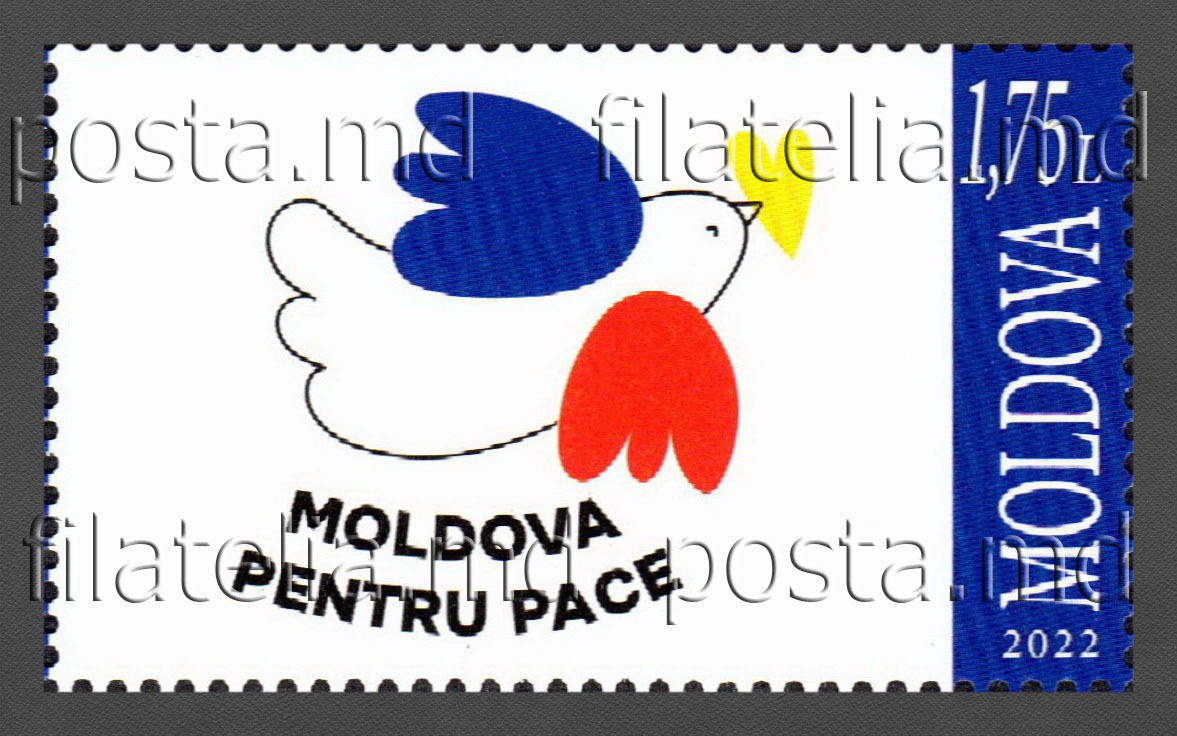