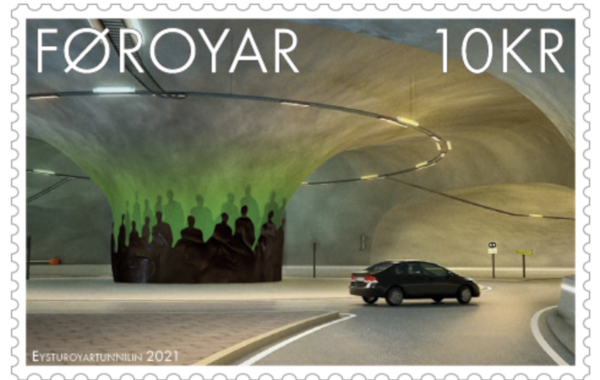 There are some engineering achievements that deserve recognition and the Eysturoy Tunnel fits into that category with its 'sub-sea roundabout'. Faroe Islands have issued two stamps to celebrate the opening of the tunnel.

The underwater road opened on 19 December 2020 and is the largest ever infrastructure project in the Faroe Islands, stretching just under seven miles and connecting the islands of Streymoy and Eysturoy.

But it isn’t just the technical aspect of the tunnel that commands celebration, including the two new stamps from the Faroe Islands. The tunnel has a number of artistic flourishes, including a subsea roundabout which features a huge basalt column in the centre.

The contractors contacted, Faroese artist Tróndur Patursson and asked him to suggest artistic decorations for the column. Patursson’s solution was to feature the Faroese chain dance on steel.

The dancing figures are illuminated from behind with colour-changing light, projecting dancing shadows on the basalt column when car headlights sweep over them.

As the Posta Faroe Islands team point out: ‘A chorus of one of the long heroic ballads says that “no one dances underground” - but apparently everything is possible under the seabed.’