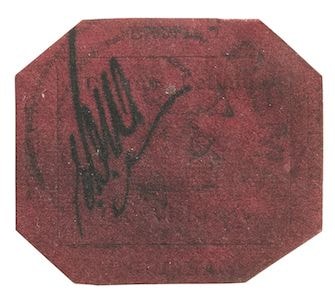 The famous British Guiana 1c Black on Magenta has been sold for nearly one billion times its original face value. Here are ten little known facts about the world's most expensive stamp… ...

The famous British Guiana 1c Black on Magenta has been sold for nearly one billion times its original face value.

• The famous stamp was produced following the delay of a shipment of stamps in 1852. The postmaster ETE Dalton turned to the printers of the local Royal Gazette newspaper, and commissioned a contingency supply of postage stamps: the 1c magenta, a 4c magenta, and a 4c blue.

• The 1c stamp was printed in black on magenta paper and featured the image of a sailing ship (hardly visible on the only remaining example).

• Afraid of forgery, the British Guiana postmaster insisted that each postal clerk sign the stamp, and the initials EDW, of clerk ED Wight, can be seen on the world-famous stamp.

• In 1873, L. Vernon Vaughan, a twelve-year-old Scottish schoolboy living with his family in British Guiana, found the stamp among a group of family papers.

• After being purchased by Austrian nobleman Count Philippe la Renotière von Ferrary in 1878, France seized his collection, which had been donated to the Postmuseum in Berlin, as part of the war reparations due from Germany, and sold the stamp, in 1922, to New York textile magnate Arthur Hind for $35,000.

• At the 1980 auction a group of British stamp dealers tried but failed to buy the stamp.

• The stamp's owner John Du Pont was convicted of murder in 1997, meaning the stamp was held in his collection.

• Du Pont passed away, while in prison, in December 2010, leading to the recent sale of the stamp.

• The stamp was expected to fetch up to £12 million at auction, but the £5.5 million price tag is still a world record.

You can find out much more about the famous stamp in the April issue of Stamp & Coin Mart - available to download now or order as a print copy.