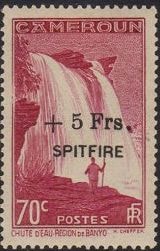 Vincent A Green reveals how French Cameroun stamps contributed to the production of the legendary Spitfire fighter aircraft during World War Two ...

What's the link between cash contributions received from many different sources and locations throughout the British Isles during World War Two, the need for top-up production funding to help build more ‘Spitfire’ aircraft and a remote waterfall situated on the M’Bam River, near Banyo in the former French West African Colony of Cameroun?

The mention of the Spitfire evokes the notion of defiance in the face of the seemingly overwhelming odds faced during the ‘Battle of Britain’ fought in the skies over South East England between July and September 1940.

It cost approximately £10,000 to produce an operational ‘Spitfire’ which in 1938 was a significant sum of money. As the ‘Battle of Britain’ escalated there was a desperate need for more Spitfires and funds were launched to raise funds throughout the country.

In 1940, after consultation with Genéral De Gaulle, the leader of the Free French Forces, it was agreed that four of the Cameroun 1939-40 definitives stamps, each depicting an image of the Banyo Waterfall, could be used as a means of generating additional revenue to pay the costs incurred in producing ‘Spitfires’ at the main factory in Castle Bromwich, Birmingham.

The cash raised by this surcharge was paid to the ‘The Spitfire Fund’ that also included the contributions from many towns and cities, companies, private groups, clubs and individuals with their own local ‘Spitfire Funds’.

In Great Britain a ‘Cinderella’ issue was made available and offered for sale to the general public. This was in a booklet format of 24 stamps that sold for 1 shilling.

Vincent A Green is Chairman of stamp auctioneers and dealers Sandafayre Ltd, find out more about the company at: www.sandafayre.com

Find out more about the 'Spitfire Fund' stamps of Cameroon and Great Britain, and read about the African stamps issued by the Empires of France, Germany, Italy, Spain and more, in the May 2014 issue of Stamp & Coin Mart.