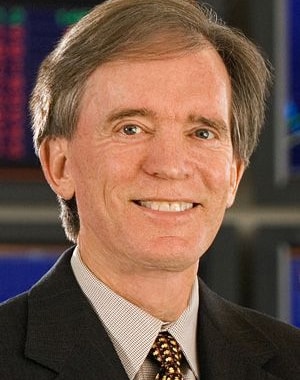 Stamp & Coin Mart asks William H Gross, the wealthy investment manager and philatelist, about his incredible stamp collections, his charity stamp auctions and the future of stamp collecting, in an exclusive interview ...

It’s a familiar story to millions of stamp collectors. After collecting stamps as a child, Bill Gross put aside his albums and focussed on the demands of a career, returning to the hobby when he was much older.

But while most collectors satisfy their curiousity with the odd purchase at a stamp fair and the occasional glance at an auction catalogue, Gross’s budget is bigger than almost any other collector on the planet, including our own Queen!

Exactly how this one-of-a-kind collector made his billions is another story, but even when discussing his first taste of philately as a child, the investor’s eye for a financial opportunity is clear to see.

While most of us have fond memories of that first album and of carefully mounting the colourful stamps, from weird and wonderful countries, Gross’s recollections are tinged with disappointment, as he recalls the first US stamps he and his mother bought and the seemingly sad fact that they did not make the family a fortune.

'My mom collected commemorative sheets to send me to college and they weren’t even worth 3 cents.’

After purchasing sheets of commemoratives in a bid to raise college funds to send her son to college, Gross’s mother sent the eighteen-year-old off to San Francisco to sell the stamps and reap the rewards. ‘My mom collected commemorative sheets to send me to college,’ he explains, ‘and they weren’t even worth 3 cents.’ The story, dryly described by Gross as a ‘Jack and the Beanstalk’ moment, often comes up in interviews and has left a lasting impression on him.

Headline-grabbing collections
Today, Bill Gross’s stamp collecting grabs headlines around the world, both in the philatelic and general press.

In 2005, for example, Gross bought a block of four Inverted Jennys for just under $3 million, only to promptly swap them with a fellow collector for a 1-cent 1868 Z Grill, in what has been described as a ‘playground trade’.

The philatelic fame also comes from his generosity, which has seen him donate millions to charities following high profile stamp auctions.

Sales of the financial expert’s peerless collections have raised more than $14 million for charities such as Médecins Sans Frontières and the Millenium Villages Project, and have boasted material such as an unused block of 24 Penny Blacks (sold in June 2007 for $1 million), a Mauritius 2d blue on cover ($80,000), and a tête-bêche pair of 1866 Finnish stamps ($260,000).

Collecting methods
The transformation from a disappointed young collector to perhaps the world’s wealthiest philatelist didn't happen over night. After graduating, Gross began his career on Wall Street, and in the early 1970s became the founder and co-Chief Investment Officer of PIMCO.

When time and work allowed, the businessman dropped into a local stamp shop and soon caught the collecting bug again.

‘I went to a local stamp store in Laguna Beach and got a US collection for about $1,800, which was a start,’ he explains. But with the memory of his mother’s ill-fated stamp investments still in his mind, and with a now advanced knowledge of financial speculation, Gross approached his return to the hobby with one eye on the finances.

‘I couldn’t enjoy it if I was paying the wrong price or if the stamps were going down in value. So I decided to focus on quality. I now go for investment, rarity and also interesting items.’

Gross developed his own methodology for tracking the value of certain stamps, using auction catalogues from previous sales. ‘I could trace the stamp’s history,’ he says, ‘and compare the auction price to the GDP of the respective country. I’ve used the method ever since to make sure I never overpay.’

Museum pieces
While many of Gross’s rarest items have been sold, a selection of his items have been loaned to the National Postal Museum and take pride of place in the William H Gross Stamp Gallery, opened in 2013.

The museum pieces include:

The William H Gross Stamp Gallery is dedicated to postal history and stamps, and allows for educational visits and exhibitions.

With the continued concern that young people are not as interested in stamp collecting as the previous generation, such investment is vital, William says:

‘E-mail and other forms of communication are taking over and stamps are probably not as popular as they used to be, Gross says. ‘We need to grow the hobby from the base for young collectors and not just focus on the older generation. It’s only when you get into your 40s and 50s that you remember that you collected stamps in your childhood and go back to it.’

Whether you agree with Gross’s money-minded attitude to collecting that has seen him promote stamps as a wise investment choice, the fact remains that his shrewd acquisitions have brought welcome attention to the hobby. The wealthy collector has given American philately a fantastic boost for the future.

As he continues to follow his methods and invest in stamps, it seems it not only Gross that profits.