Stamp blog: The fraught history of postwar Vilnius and the Polish Republic of Central Lithuania In the latest in his stamp blog series, Dr David Parker takes a look at the postwar history of Vilnius and the Polish Republic Central Lithuania, as told through stamps.

At 11.00am on 11 November 1918 not all armed forces across Europe stopped fighting – far from it. In the former Imperial Russian province of Lithuania, the fight for independence was only just getting started, and in the various regions of Poland long occupied by Russia, Austria and Germany other partisan forces were seizing the opportunity to reassert their independence.  And in and around the historic city of Vilnius – long claimed by both Lithuania and Poland – Lithuanian and Polish ambitions were soon to violently clash.

When German troops reluctantly evacuated Vilnius on 1 January 1919 they handed it over to local Polish units, forcing the beleaguered infant Lithuanian government to retreat west to Kaunas. However Bolshevik Russia sought to reassert dominance over the Baltic States, and by mid-January 1919 the Red Army had occupied most of Lithuania, and Vilnius became the capital of the Lithuanian Soviet Republic.

The Red Army was also striving to re-conquer the Imperial Russian part of Poland and therefore both Lithuania and Poland were fighting the Soviet Union, but not as allies.  The Poles recaptured Vilnius in April 1919, and tried unsuccessfully to overthrow the beleaguered republican Lithuanian government. It survived, though, and then rallied sufficiently to drive Soviet forces from the country by August 1919, and by December to force back the monarchist White Russian Army that had invaded from the north.

Besieged on all sides the Lithuanian government still found time to issue a short set of stamps using a variety of available papers and perforators and three carefully composed and highly symbolic designs.  They were inscribed LIETUVOS PASTO ZENKLAS (LITHUANIAN POSTAL CODE).

Each design centred on a portrait of the Vytis, the legendary Lithuanian armoured knight with a flowing saddle blanket and raised sword riding a white charger.  It had been the motif of the medieval Grand Dukes of Lithuania, and the shield displayed the double armed cross of the first Christian rulers of the Jagiellonian dynasty.  The Vytis became the Lithuanian national image during the nineteenth century revival, especially after the Russians banned its display.  It came to represent the repulsion of occupiers and invaders, and never more crucially than in the post 1918 crisis.  It was also inseparable from Vilnius, the ancient capital of the Grand Dukes.

On 15 February 1920 a striking set of eleven stamps with four designs celebrated the second anniversary of the bold wartime declaration of independence.  The images were symbolic. The first showed Lithuania being granted the blessing of independence, the second Lithuania allegorically portrayed as a mother and child arising from the winter of oppression, the third the figure of Lithuania breaking free from chains, and the fourth the Vytis flying over the Tower of Gediminas, the symbol of the contested city of Vilnius.

In April 1920 Lithuania’s Constituent Assembly was elected, and on 12 July a peace treaty was signed whereby the Russian SFSR recognized a fully independent Lithuania together its claims to Vilnius.  On 25 August a set of eleven stamps with four striking designs marked the Assembly.(7.30)  Two stamps were inscribed STEIGIAMASIS SEIMAS 1920 (CONSTITUENT ASSEMBLY 1920) with one featuring the Vytis and the other the ancient images of the life-bringing sacred oak tree and flaming altar.

The other two portrayed greatly revered grand dukes of Lithuania at the height of its medieval power.  One was Gediminas (1275-1341) whose military and diplomatic successes led to the Grand Duchy of Lithuania stretching from the Baltic to near the Black Sea.  The other was Vytautus the Great (c1350-1430) who won the key Battle of Grunwald in 1410 from which the Teutonic Knights never fully recovered and, significantly, was elected King of Poland.

However the current Polish-Soviet War was still going on, and when the Russians briefly pushed back the Poles they handed Vilnius to the Lithuanians.  The situation remained dangerous, though, as Russia had not abandoned thoughts of recreating a Lithuanian Soviet Republic, and Poland deeply coveted the region as part of its ‘homeland’.

In late October 1920 Marshal Jozef Pilsudski, Poland’s aggressive Chief of State, acted deviously to negate an armistice he had made with Lithuania earlier in the month that implied Vilnius was on the Lithuanian side of the border.  The Polish General Zeligowski pretended his troops had mutinied and that he had been unable to prevent them occupying Vilnius – where they stayed.  The Republic of Central Lithuania was set up, and when all the League of Nations attempts at resolving the situation failed, Poland annexed it on 24 March 1922.

In 1923 the League of Nations Conference of Ambassadors agreed that the region was Polish, and Lithuania, utterly incensed, broke off all relations with Poland until 1938.  Among many complications, this meant a letter from Poland to Lithuania had to go to a neutral country where it was repackaged to remove any signs it was Polish and then posted on to Lithuania. 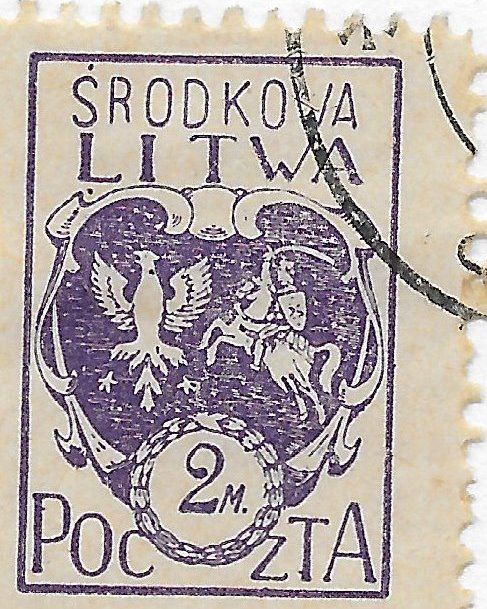 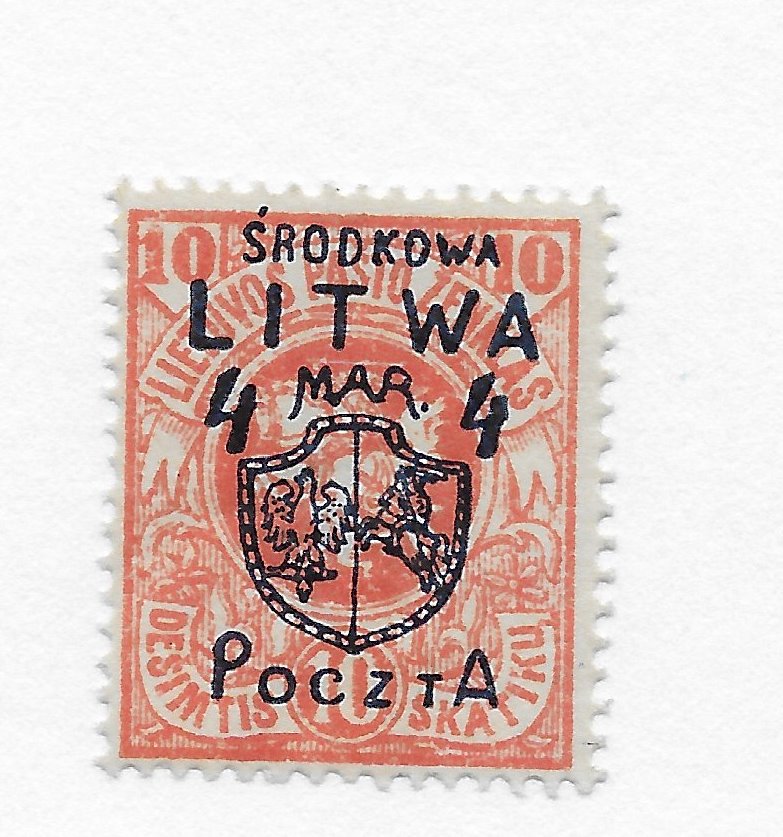 From December 1920 onwards several pictorial sets were issued.  Even a Postage Due set helped stamp a Polish identity on the region with views of government offices, cathedrals and castles. 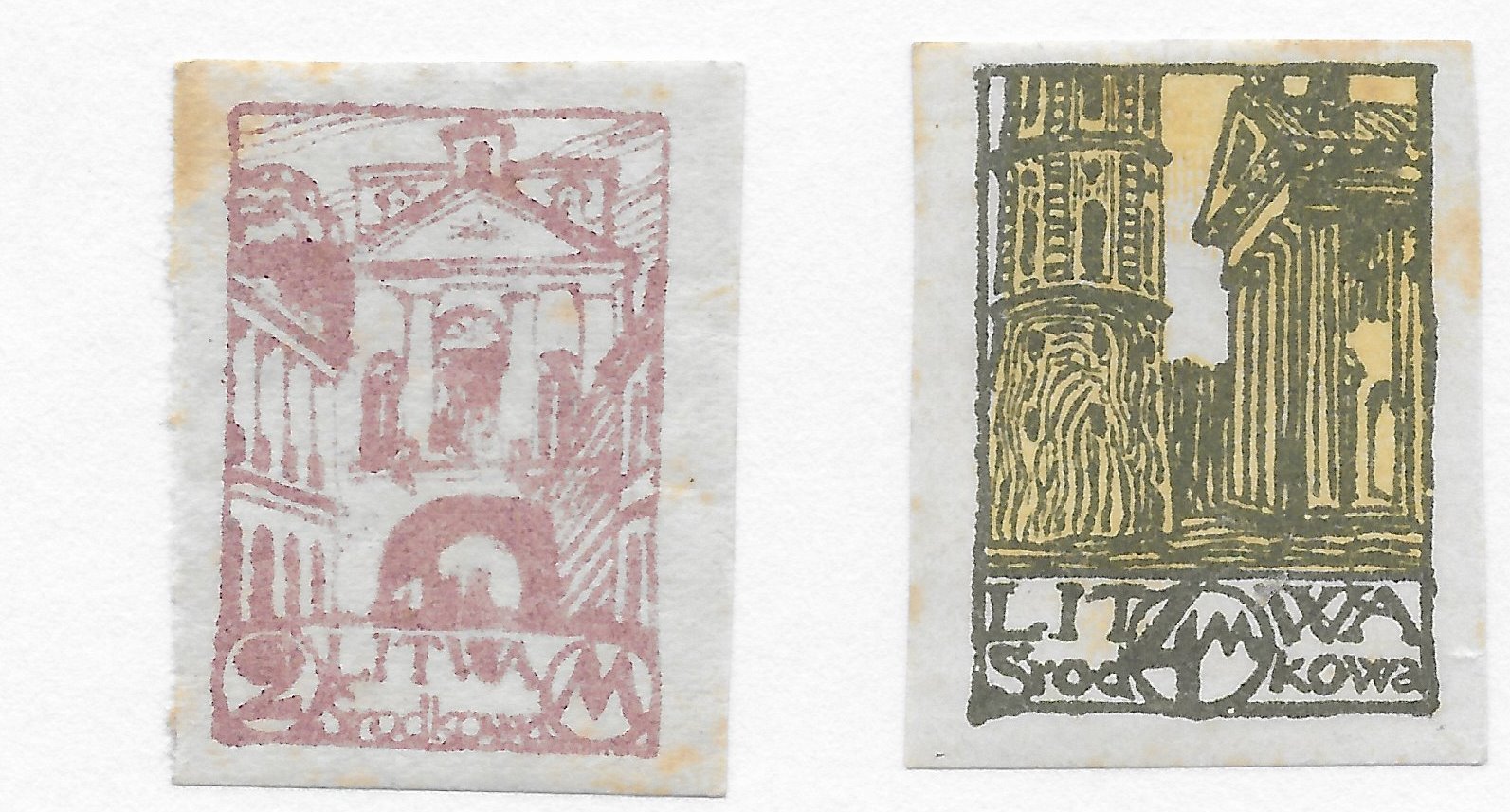 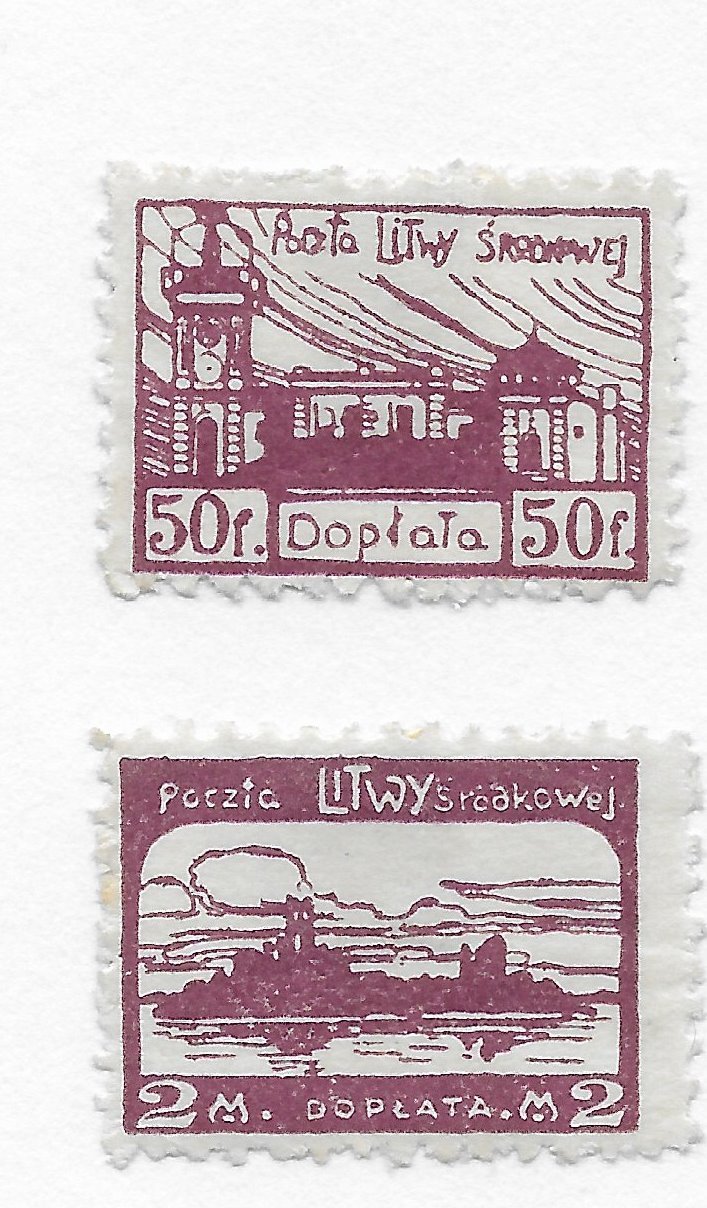 Other issues rekindled memories of the medieval Polish-Lithuanian Commonwealth and its rulers.(5.23)  Those from the summer of 1921 included a scene of the union of Poland and Lithuania in 1569 (10m), and portraits of Queen Jadwiga and King Wladislaw II Jagiello (4m).  Jadwiga was Queen of Poland (1384-99) in her own right and despite her Christian faith she married Wladislaw, the pagan Grand Duke of Lithuania in 1386, thereby creating a far larger kingdom.

The frontiers were extended, plots thwarted, and in 1410 Wladislaw broke the power of the Teutonic Knights at the celebrated Battle of Grunwald.  The 20m featured two Polish-Lithuanian heroes.  One was Tadeusz Kosciuszko (1746-1817) who fought the British in the American War of Independence and was prominent in the unsuccessful 1794 uprising against Russia.

The other was Adam Mickiewicz (1798-1855), the national poet of Poland, but also celebrated in Lithuania, whose works encouraged nationalist movements and led to his long exile.  The 6m was equally pointed as it portrayed Vilnius University.   Long closed by the Russian Tsar, Marshal Pilsudski had been instrumental in reopening it recently as Stefan Bathory University, named after a renowned late sixteenth century King of Poland and Grand Duke of Lithuania 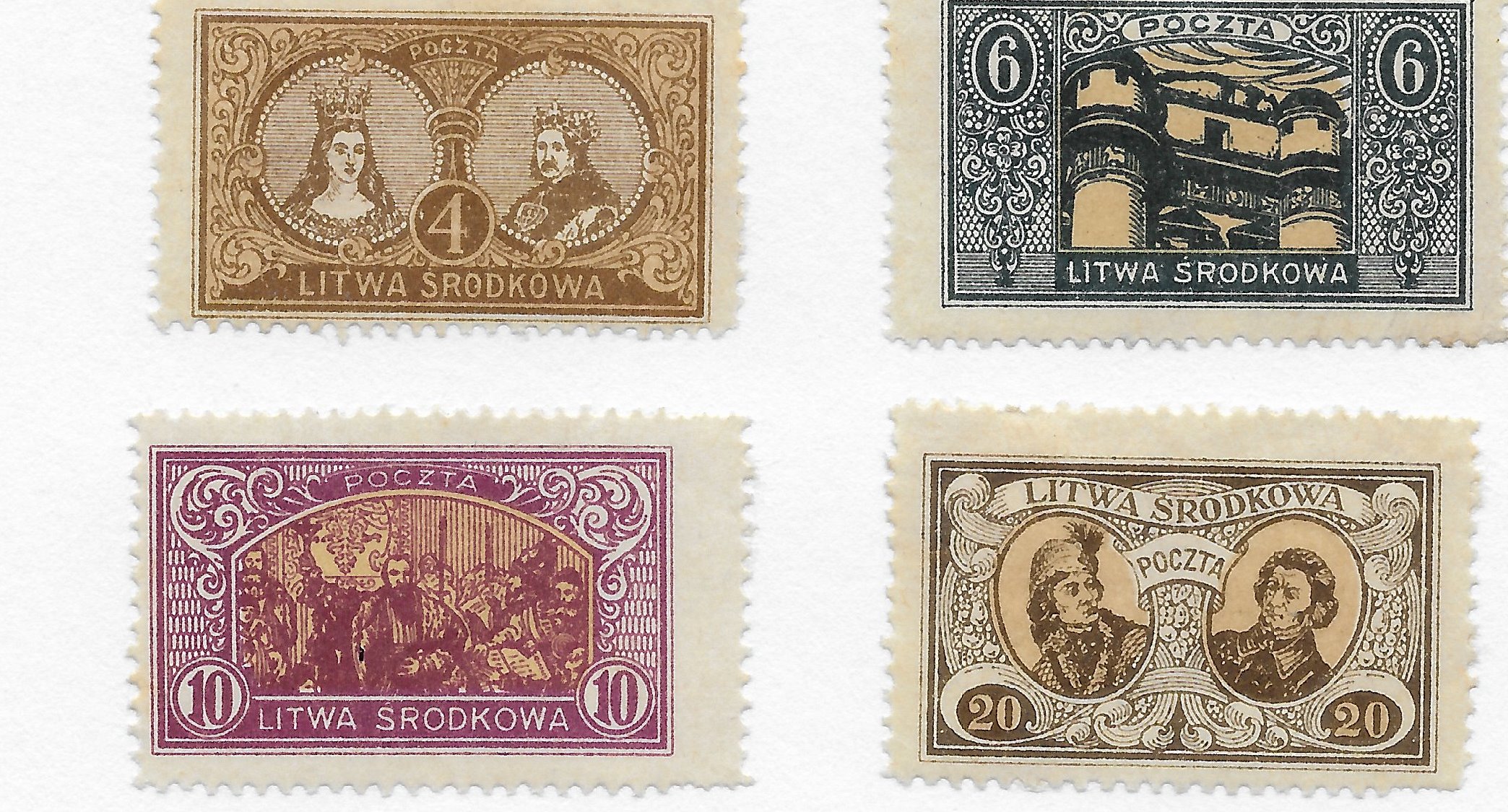 Later in 1921 all pretence that a mutiny caused the seizure of Vilnius was swept aside by two stamps celebrating its first anniversary with scenes much like a hero’s victory parade.  The general who apparently lost control of his troops was now honoured with a stamp.  The situation remained unchanged until the Second World War. 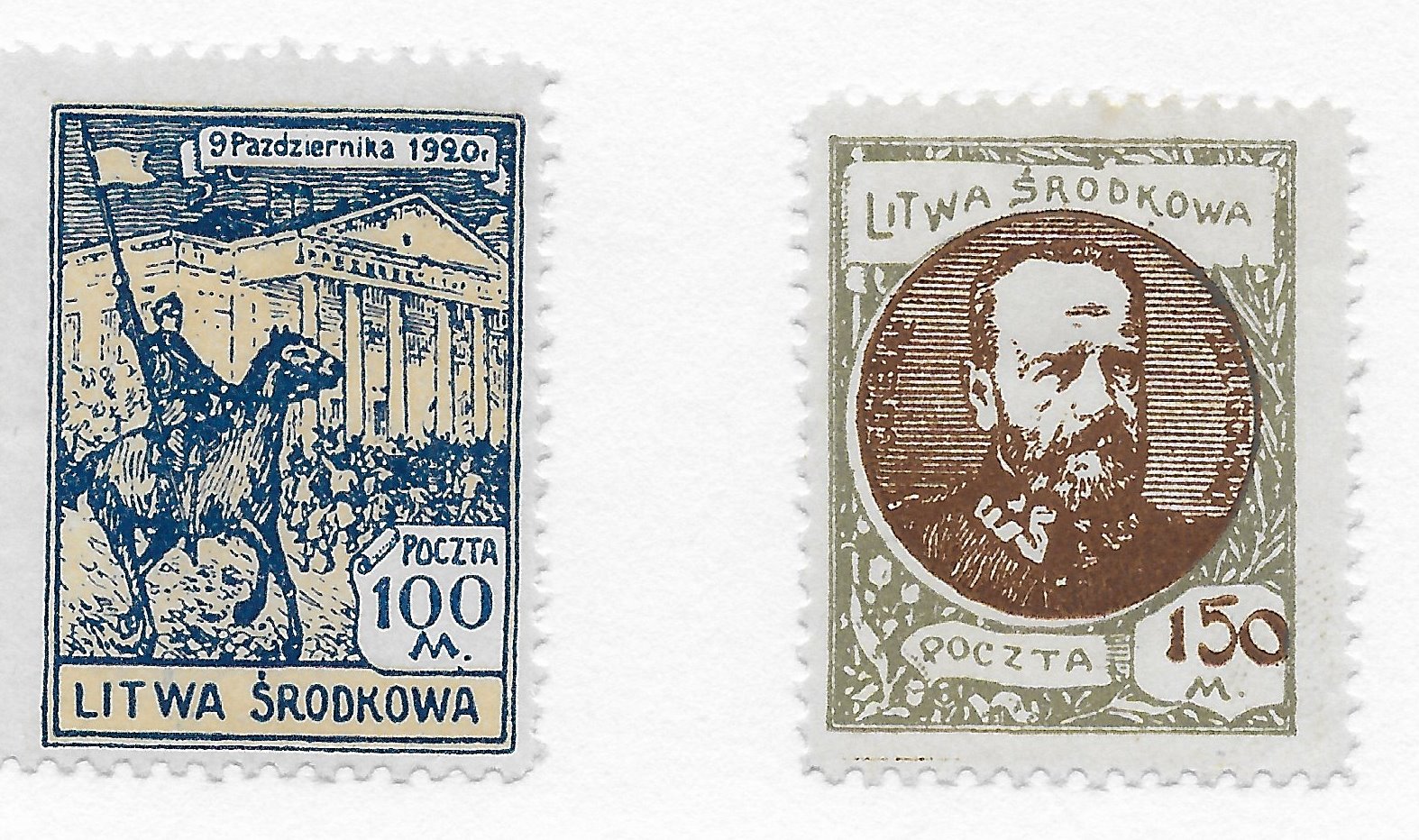 QUICK LINK: A tale of two duchesses: the stamps of Luxembourg