Dr David Parker provides an expert guide to the periodic issue of stamps vividly tracking the lead up to World War I from the perspective of different nations.

Most countries produce numerous sets of stamps each year that celebrate national customs and tradition, recall famous events, honour famous individuals, and celebrate important anniversaries.  However at the end of the nineteenth century and beginning of the twentieth century stamps assumed far more significant roles as Europe, riven with international jealousies, embarked upon a world war that took millions of lives, destroyed several dynasties and led to the creation of a Europe that was no less riven with jealousies.

Although in the late nineteenth century newspapers and magazines were readily available - at a price - other forms of mass media were still in their infancy and for many countries stamps assumed an importance way beyond their basic purpose of paying for the dispatch of letters and parcels.  The images on them sent all sorts of messages to countless towns, villages and homes, and it could be argued that the seemingly innocuous nature of these small pieces of paper made the impact of the image more persuasive.  Certainly many governments thought so, and were willing to ensure the country regularly designed and issued sets calculated to wed people to particular regimes, policies and ideas.

In the tumultuous decades leading up to war in 1914 the historic jealousies and wars wracking the Balkans as the domination of the Ottoman Empire faded ensured the emerging new nations of Greece, and then Romania, Bulgaria, Albania, Montenegro and Serbia used every means, and notably postage stamps, to help publicize and assert their places in the sun.   The more northerly of these countries looked warily towards their huge neighbour, Austria-Hungary, which clearly had ambitions of exercising authority in the ‘new’ Balkans, not least to keep their other mighty neighbour, Imperial Russia, out of the region.  When Austria-Hungary annexed Bosnia-Hercegovina in 1908 after a lengthy period ‘protecting’ it under an international agreement back in 1879, neighbouring Serbia was particularly incensed.  Here lay the spark that ignited the First World War – and as the following summary reveals, the periodic issue of stamps vividly track events from each nation’s perspective.

Under King Carol I (Prince from 1866 and King 1881 to 1914) Romania’s postage stamps were used to maximum extent to promote the royal family’s role in securing the country’s independence, enhancing its benevolent image, justifying and celebrating its expansion, linking Carol with celebrated pre-Ottoman rulers of the region, and promoting its branch of the Orthodox Church as an arm of the state.  Queen Elisabeth appeared on several charity stamps as a nurse or weaver with uplifting sayings in her own writing, while Carol featured on a detailed set commemorating Romania’s valiant fight for independence. 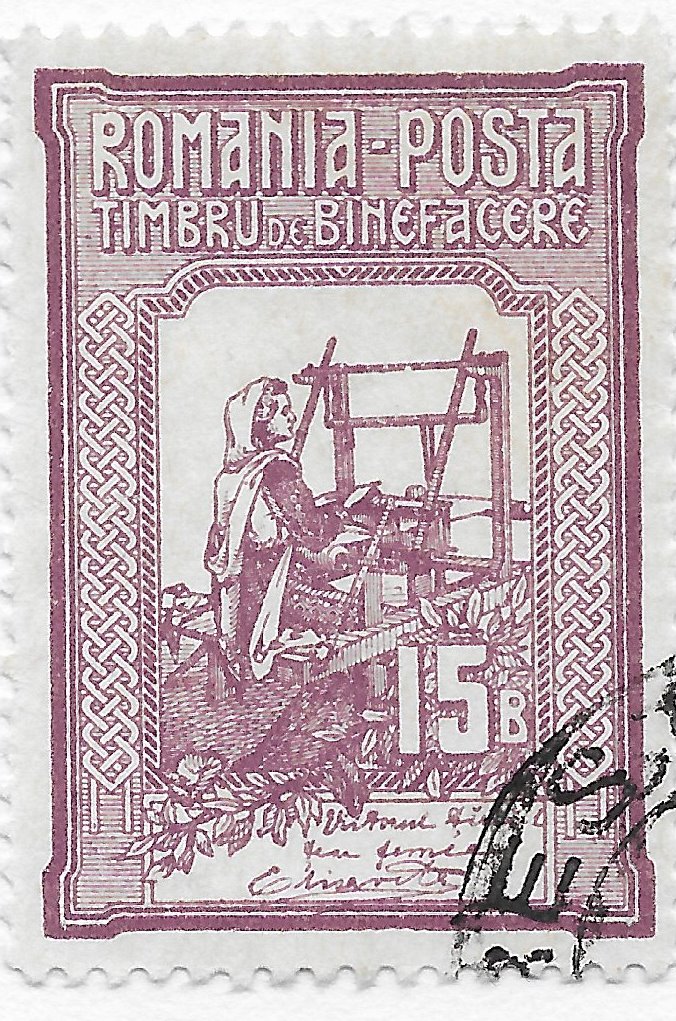 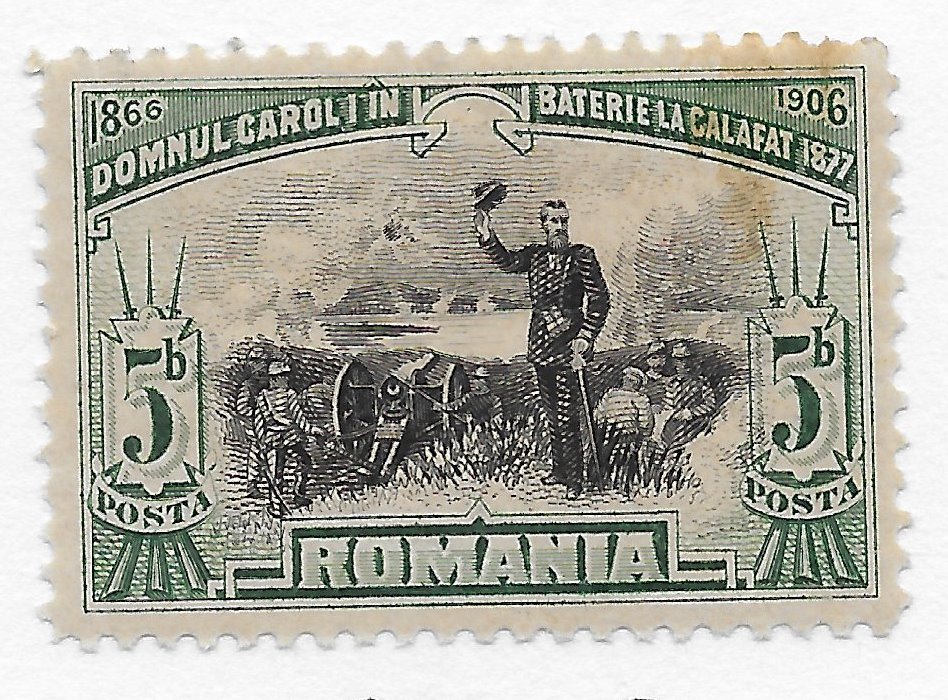 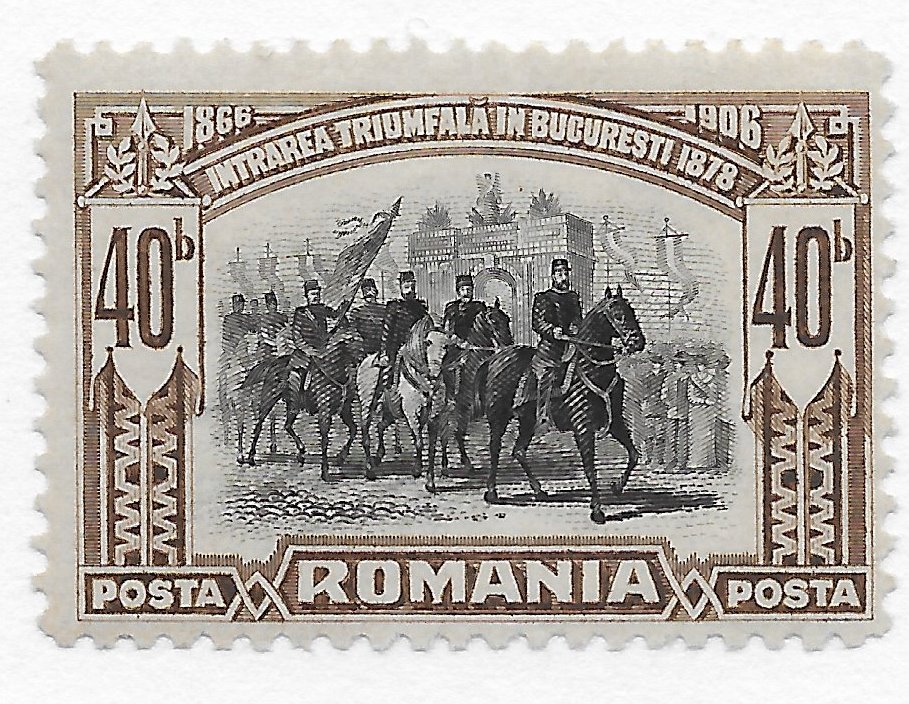 In 1906 a set featured an angel guiding a poor family to Crown Princess Marie’s door for aid.  Elisabeth and Marie were high profile philanthropists, but Carol and his ministers mercilessly subdued a peasants’ revolt in 1907.  Another set celebrated the coveted acquisition of Dobruja bordering the Danube and Black Sea in 1913. 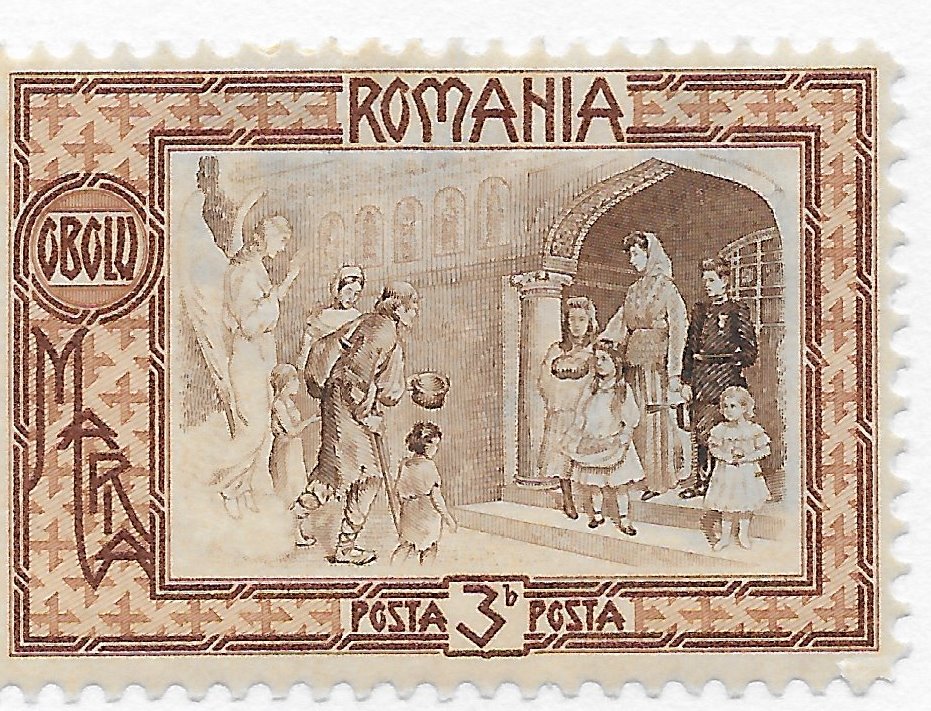 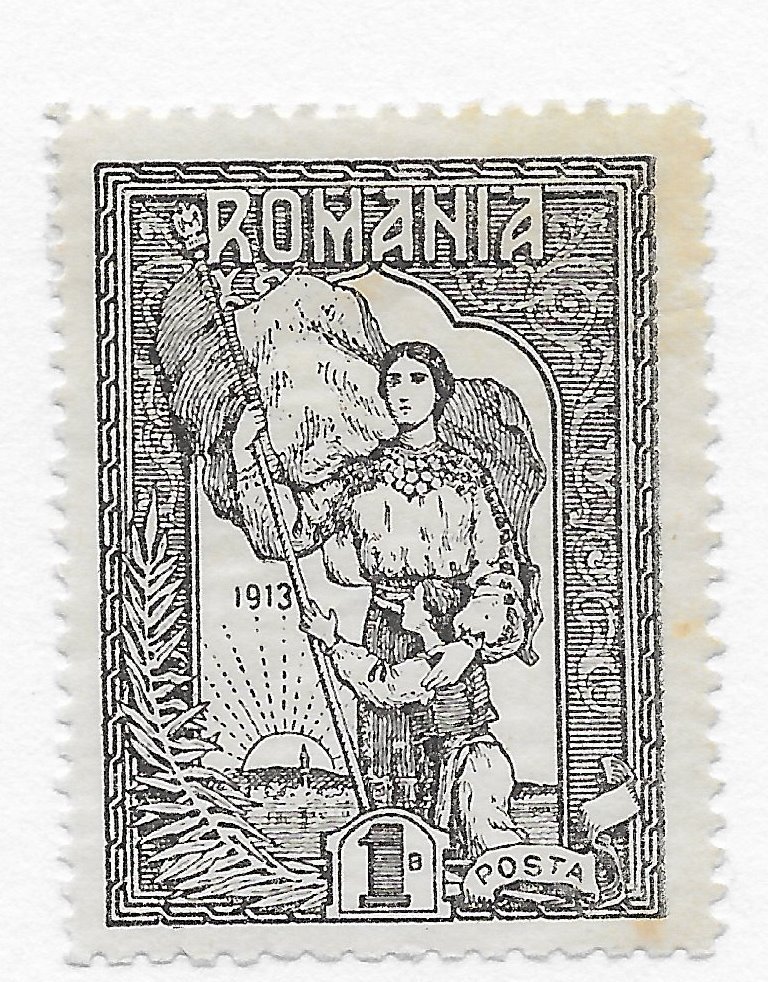 Under King Ferdinand I  (Prince from 1887 and King 1908-18) Bulgaria’s stamps overtly lionized the king himself, and did so frequently with issues showing him in a variety of uniforms (that he adored) weighed down with orders and medals.  In 1911 a beautifully designed set featured the country’s natural beauty and historic sights, but gave priority to Veliko Turnovo, the ancient capital that had launched several revolts against the Turks, and to the monasteries that had preserved Bulgarian culture and given shelter to nationalist revolutionaries. 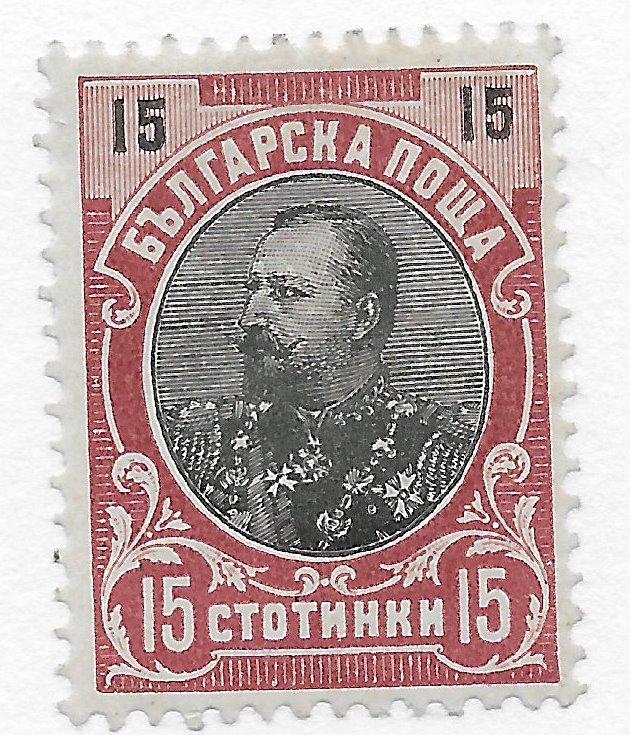 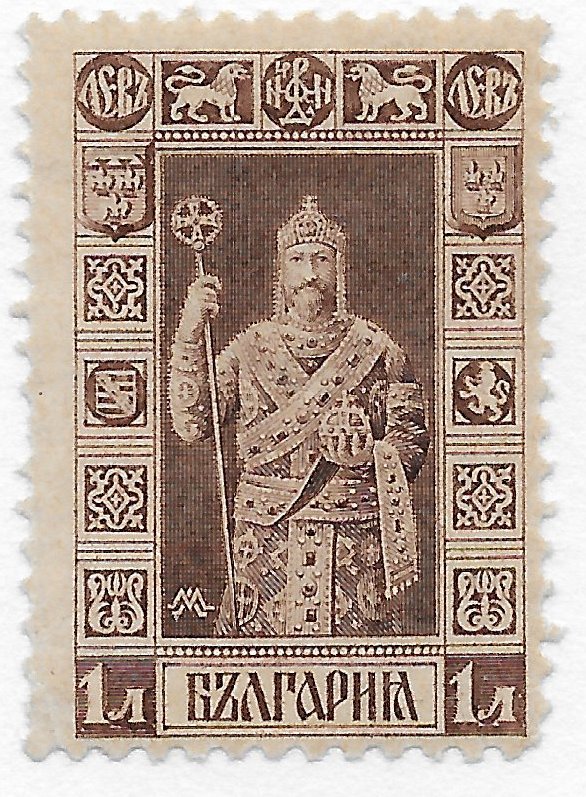 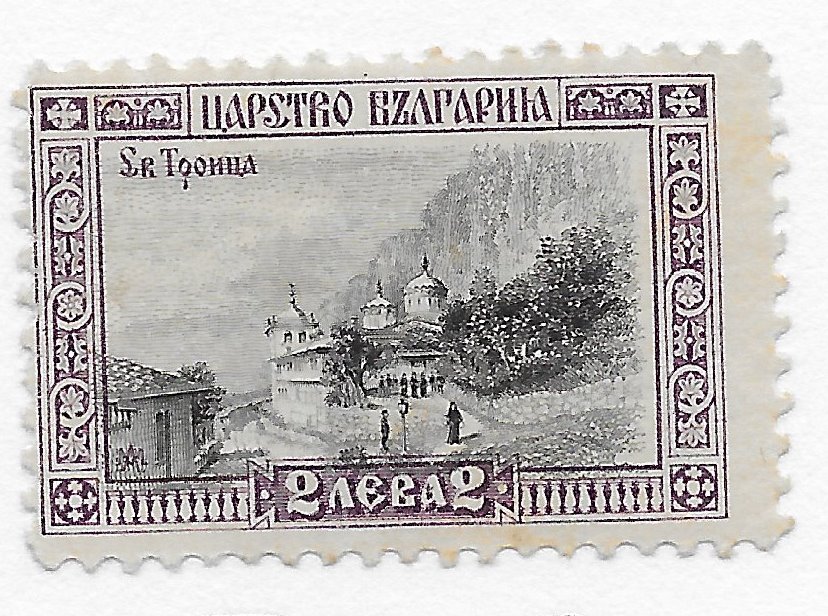 Ferdinand was ambitious, and in 1912 he allied with Serbia, Greece and Montenegro to wrest Macedonia and Thrace from Turkey – which they did.   However the victors fell out and in a second war Bulgaria was heavily defeated by its old allies who were joined by Romania as Carol could not resist grabbing Dobruja.    Ferdinand’s celebratory Silver Jubilee issue in August 1912 was followed by a joyful reissue a year later of several stamps of national views or him in uniform overprinted ‘War of Liberation’ in Cyrillic but soon afterwards a humiliating treaty confirmed that most of the Macedonian and Thracian lands he thought he had ‘liberated’ were lost.  Bulgaria had little option but to nurse its hatred of its neighbours until the world war seemed to provide an opportunity for revenge.   Romania joined the Allies; Bulgaria preferred the Germans and Austro-Hungarians 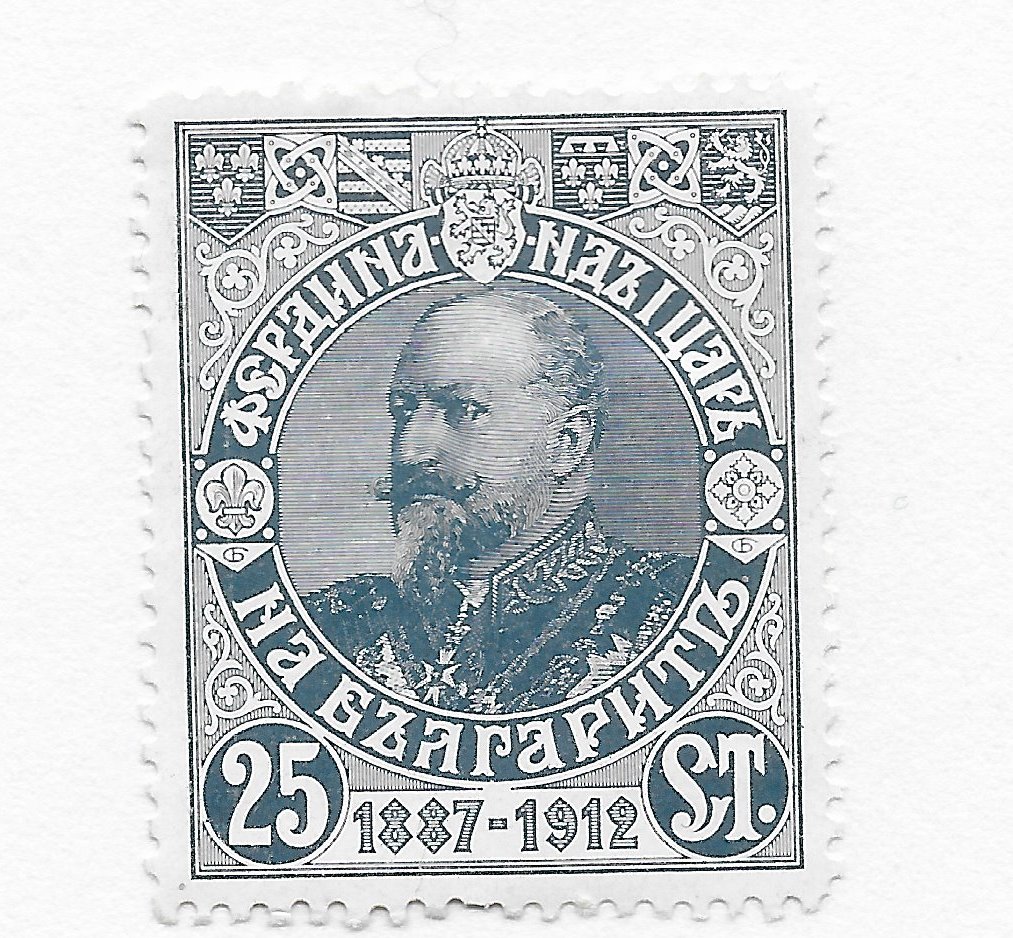 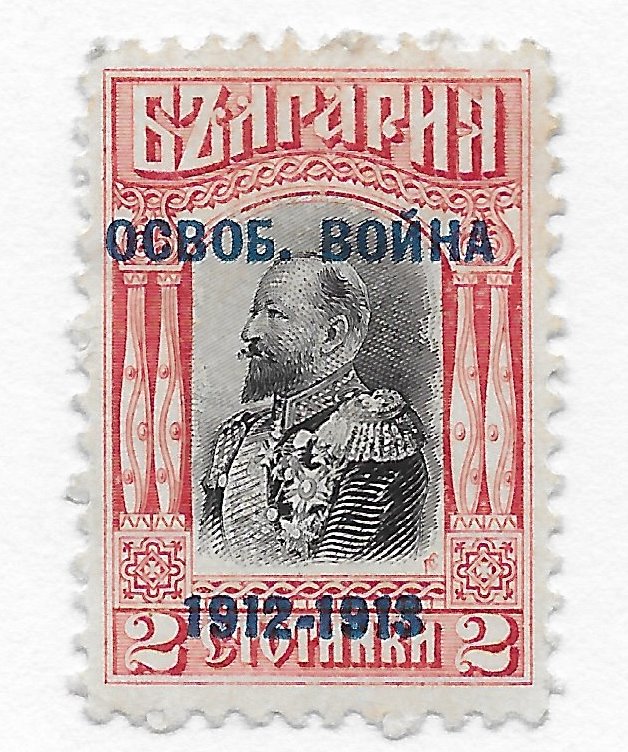 The Balkan countries could not fail to have noticed the set of 19 stamps Austria-Hungary issued in 1906-07 specifically for Bosnia-Herzegovina which at that time it administered but had not yet annexed. Beautifully designed they featured picturesque and deceptively peaceful views of the region’s towns, villages and countryside.  Ostensibly they honoured the provinces and reflected Austria-Hungary’s considerable but ultimately unsuccessful efforts to modernize, pacify and wean them away from other Balkan states.   Several of the stamps featured donkey, horse drawn and motorized postal services.   The set was reissued a few years later inscribed 1830-1910 to mark Emperor Franz Joseph’s eightieth birthday, and no doubt confirm who exactly exercised sovereignity over Bosnia-Hercegovina. 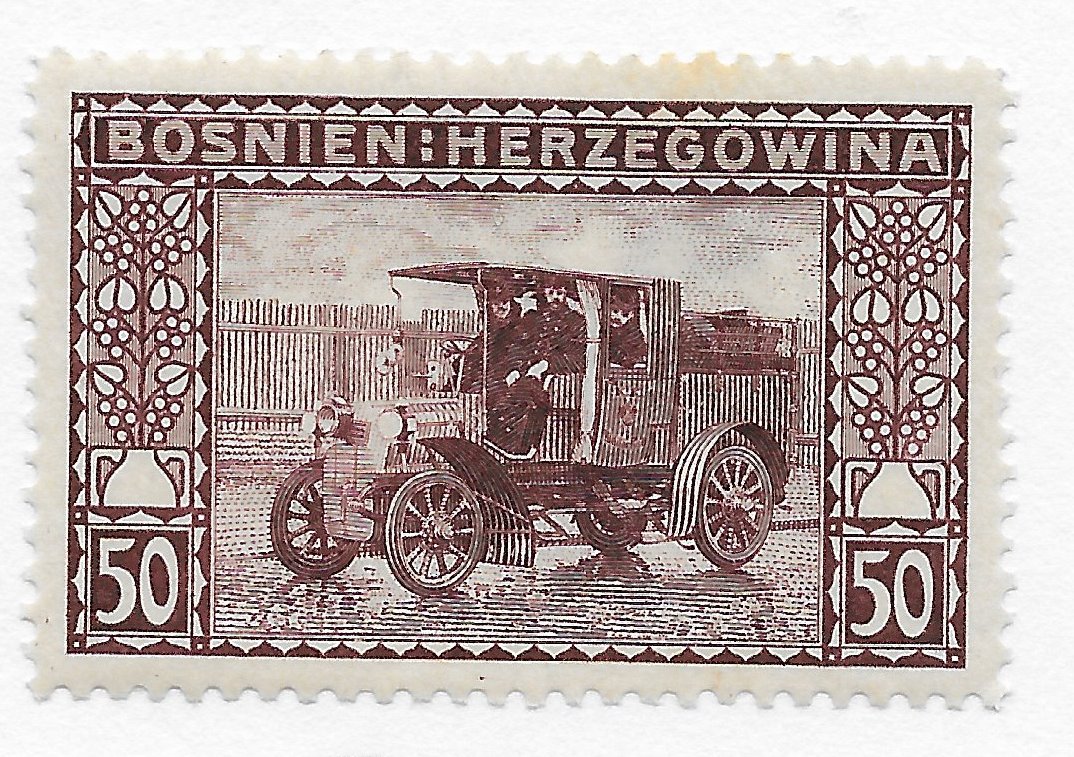 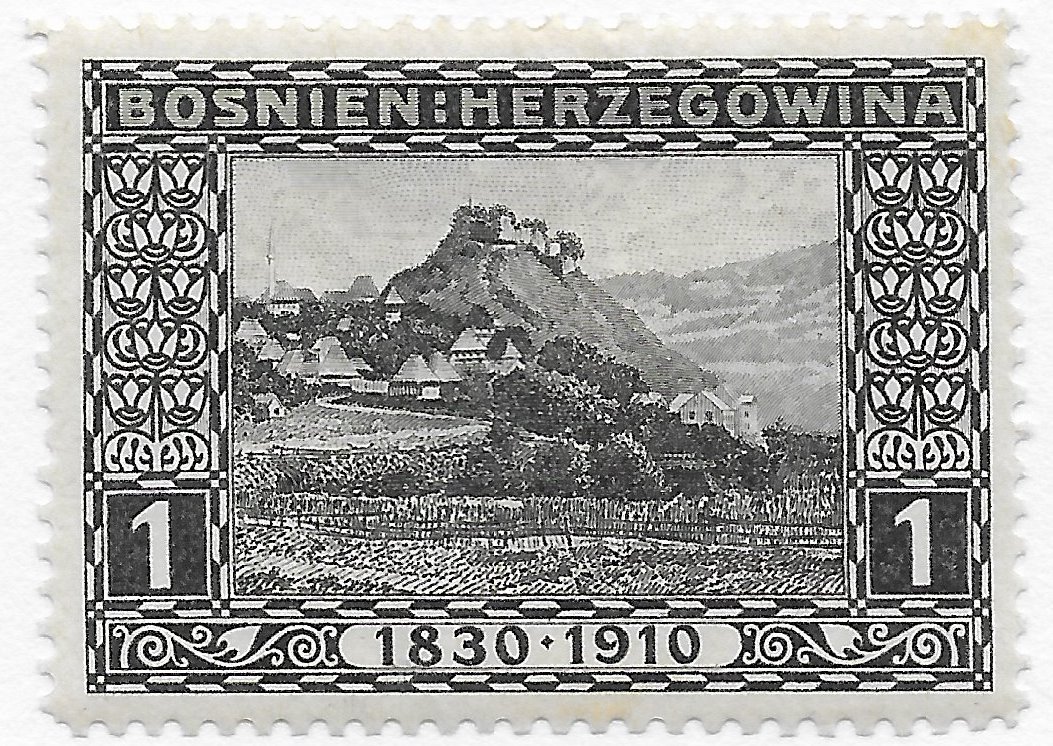 Serbia was tiny by comparison with the vast Austro-Hungarian domains, but, despite its recent history of deposing and assassinating its rulers, by 1914 King Peter Karageorgevic (1903-21) was firmly established on the throne he had secured in a blood-chilling coup in 1903.  In the Balkan Wars of 1912-13 Serbia was awarded significant territory to its south and south-west, and despite the hideous casualties King Peter’s reputation soared. 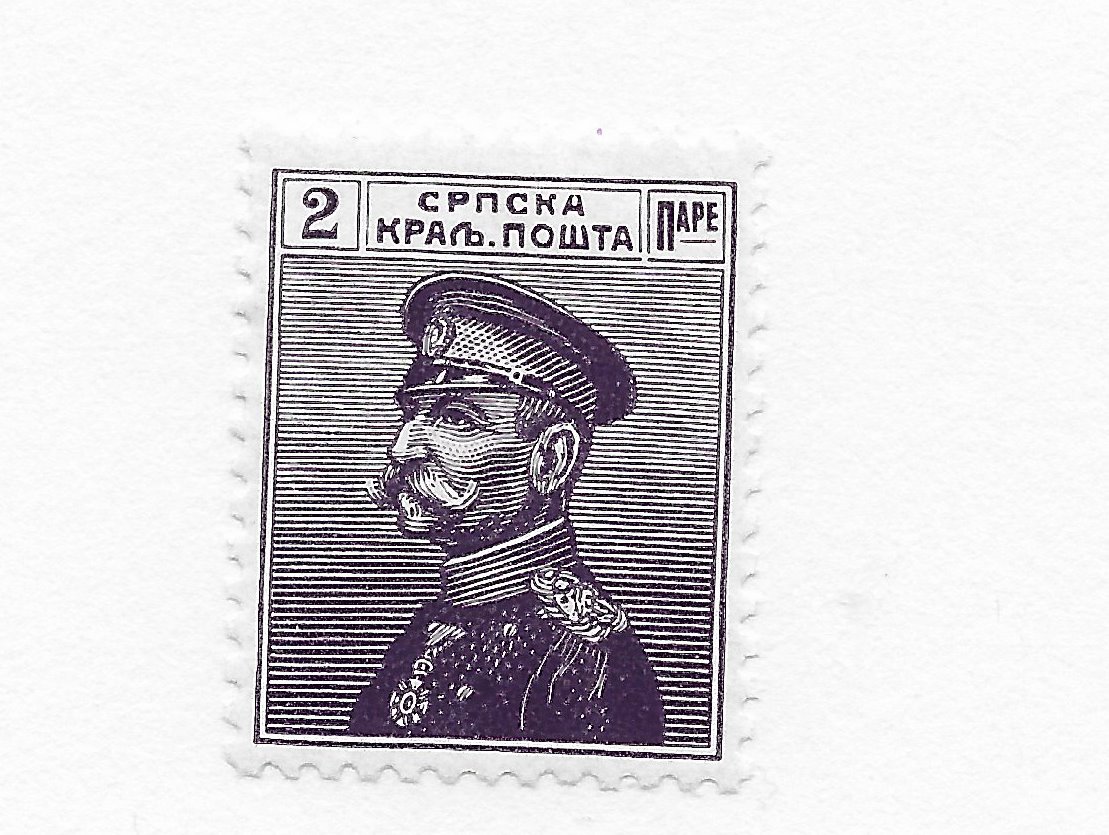 Serbia’s relations with Austria-Hungary were poor, and it grew closer to Russia which encouraged any activity that destabilized the Balkans.  Although it sounds much like a bad novel, Dragutin Dimitrijevic, the head of the Serbian Military Intelligence, was also ‘Apis’, the leader of the Black Hand Society dedicated to the union of the southern Slavs under Serbian leadership.  The Black Hand Society was behind the assassination of Archduke Franz Ferdinand in June 1914, and in 1918 King Peter was proclaimed King of the Serbs, Croats and Slovenes – later Yugoslavia.