Thematics: Death to the dinosaurs! Are you a 'palaeophilatelist'? Do you love looking at both age-old fossils and stamps? Have you tried to recreate a scene from Jurassic Park in your stamp album? If so Katrin Raynor-Evans has a few tips for you in her latest thematics column.

Over the past three weeks I have explored stamps with an astronomy theme from the first astronomy stamp to the celebration of Stonehenge and the summer solstice.

I thought this week I would combine my two philatelic interests – astronomy and palaeontology.

You may wonder what the connection is but bear with me… it all begins 243 million years ago when dinosaurs roamed the Earth.

Classed as reptiles, they have long been the fascination of palaeontologists, geologists, children, and adults and have featured on hundreds of stamps.

Ten stamps were issued on the 10 October 2013 commemorating British Dinosaurs, or rather, dinosaurs discovered in the British Isles.

You may think these images are computer generated but they were illustrated by artist John Sibbick with consulting advice from Dr Angela Milner from the Natural History Museum.

The collection of dinosaur and palaeontology themed stamps even has its own name – palaeophilately.

Dinosaurs lived through the Triassic, Jurassic and Cretaceous periods, surviving one extinction event at the end of the Triassic period before becoming fully extinct approximately 65 million years ago following a huge impact event on Earth.

It is largely accepted that a bolide or fireball up to nine miles in size impacted Earth around Southeast Mexico and wiped the dinosaurs out. 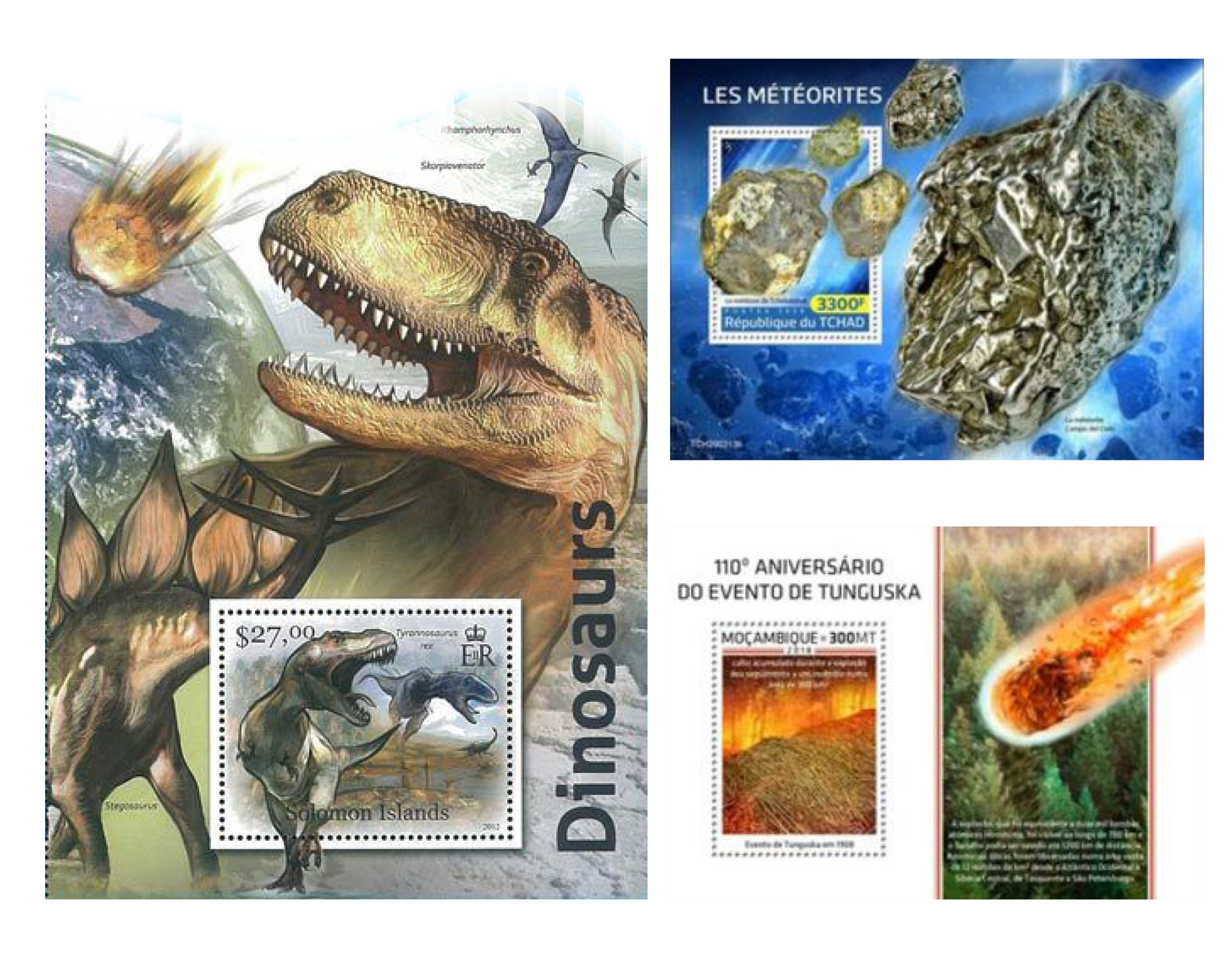 In 2012, the Solomon Islands issued a souvenir sheet of five stamps, with the background artwork illustrating a meteorite impacting the Earth. This is one of the only set of stamps illustrating the demise of the dinosaurs from the meteor impact.

But plenty of meteors and meteorites have featured on their own stamps, from the Chelyabinsk meteor that featured on a stamp issued in Chad last year to a rather beautiful souvenir sheet celebrating the 110th anniversary of the Tunguska meteoroid issued in Mozambique.

Just this year in March, a meteorite was found on a driveway in Gloucestershire and was named the Winchcombe meteorite. I wonder if this will feature on a stamp of its own in the future.