The Beano characters on Isle of Man Christmas stamps 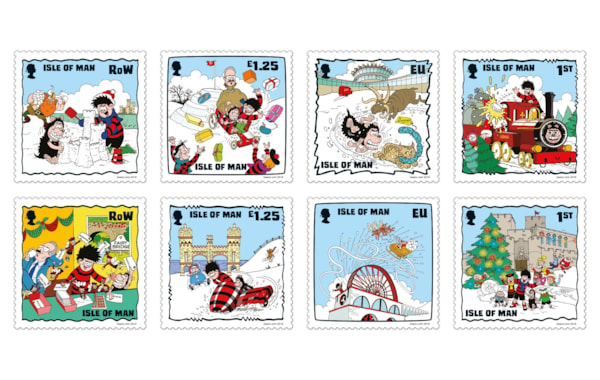 The world’s longest running weekly comic the Beano celebrates eight decades of comic capers this year and Isle of Man Post Office has joined the celebrations with eight new stamps that show well-loved characters Dennis and Gnasher causing comic chaos on the island.

The story begins with Dennis the Menace en route to the Isle of Man for Christmas following an invitation to a Christmas party from his uncle Paul, who is a postman.

Panic sets in when Dennis can’t use his mobile phone to communicate with his friends in Beanotown and the menace fears the worst for the forthcoming holidays. Postie Paul tells Dennis a secret: ‘If you put a stamp on a postcard and address it to a friend, someone will deliver it to their door! It’s like a text except your very own butler delivers it!’ This lifts Dennis’s mood immediately and he starts sending his friends self-made postcards about his mischievous adventures on the Isle of Man.

Each of the eight stamps features a different Manx landmark.

The Tower of Refuge features on the Rest of the World stamp, with Dennis and Gnasher creating their own snow version of the monument.

Historic Tynwald Hill is featured on the £1.25 value, which has Dennis and Gnasher tying up Paul the Postman in a mail sack and throwing presents down the hill.

The mischief continues at a snowy Douglas Sea Terminal (EU value) where Gnasher is trying to grab at the non-existent tail of a Manx cat who is teasing him with a sausage-shaped Christmas gift, whilst the first class stamp shows the Isle of Man Stamp Railway Christmas train as a victim of the pair’s pranks.

On the second Rest of the World value, Dennis and Gnasher and the Manx Minx fairies make light work of the letters to Beanotown allowing time for Paul the postman to put his feet up.

Then, at the old Marine Drive toll gate, Santa, squashed into his Peel P50 car, pursues Dennis and Gnasher in their menacing sidecar (£1.25).

Santa and his reindeers find flying conditions difficult as Dennis turns the world’s largest waterwheel at Laxey into a snowball throwing machine (EU) and finally at Castle Rushen the Beano gang assemble for their surprise Christmas party proving that sending out invitations by post gets results (first class).