On February 3, 1959 Buddy Holly, Ritchie Valens and the 'Big Bopper' JP Richardson died in a tragic air crash. Here, thematics expert and dealer David Griffiths (of Thames Themes) provides a guide to creating a thematic display based on that fateful day.

The three rock 'n' roll musicians involved in the tragic and now famous plane crash were, at that time, on the verge of worldwide fame:

In his tragically short career, Buddy Holly visited the UK and Australia, and influenced not only his fellow countrymen but the UK pop bands of the following decade, including the Beatles and the Rolling Stones. His short life is also recalled in the well-known Don Maclean song 'American Pie' and later in the biopic released by Columbia The Buddy Holly Story.

Hoping to save time and keep warm during a long and busy tour of the Midwest in the winter of '59, Buddy Holly chartered a small four-seat aircraft, a Beechcraft Bonanza V tail, to fly onto the next venue with Ritchie Valens and the Big Bopper joining him. Just after one o’clock the plane left Mason City, Iowa for Fargo, Dakota, but never made its destination. The exact cause of the crash is uncertain but the pilot and all three passengers were killed as the plane nose-dived through snowy skies into a frozen cornfield.

When the plane went down on that cold February day the 22-year-old star was only just starting out on what seemed destined to be a dazzling career.

Now known as the day the music died, rock 'n' roll was never the same.

Focussing on a specific event

There are many collectors of music on stamps who will have items relating to Buddy Holly, but we are concerned only with the final day of his life. Deciding on a very specific theme is an important aspect of any display, since being too general can cause observers to lose interest as the focus is blurred. We do not need to know where he was born, find out about his childhood or know every minor event of his short career. This is the final chapter in his life.

Creating a successful and well defined collection requires plenty of research.  A combination of web-based research and more nostalgic sources can help collectors get the facts and figures they require while still getting a feel for the culture of the time.

The title of your thematic display

The choice of title when creating a thematic display is vital to any thematic as it gets the imagination going. When you put together any collection you start with a blank page. You decide what you will collect and how you are going to form the collection, and do your best to make the theme unique. 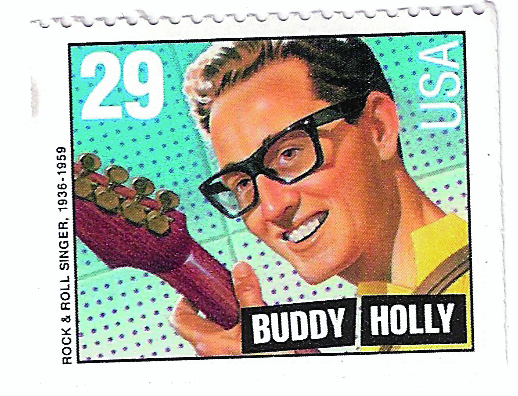 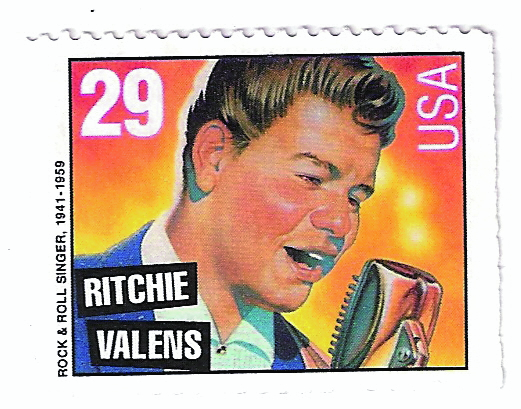 A thematic display illustrates the story in question using postcards, ephemera or letters, but the obvious source is stamps, and of course Buddy Holly and Ritchie Valens are often depicted. In June 1993 the United States issued stamps to commemorate these two musicians together with five other rock 'n' rollers. They were issued in two formats; in se-tenant pane of five across and seven down, and as booklet stamps. The two stamps shown are from the booklet.

Buddy Holly's most distinctive feature were his glasses which have thick lenses and heavy frames. A meter mail from Boston, the first illustration in our display, depicts a pair of spectacles and so qualifies as a relevant postal item. Collectors may discover more appropriate eye-wear on other items of post, but the Boston item at least sets the scene. 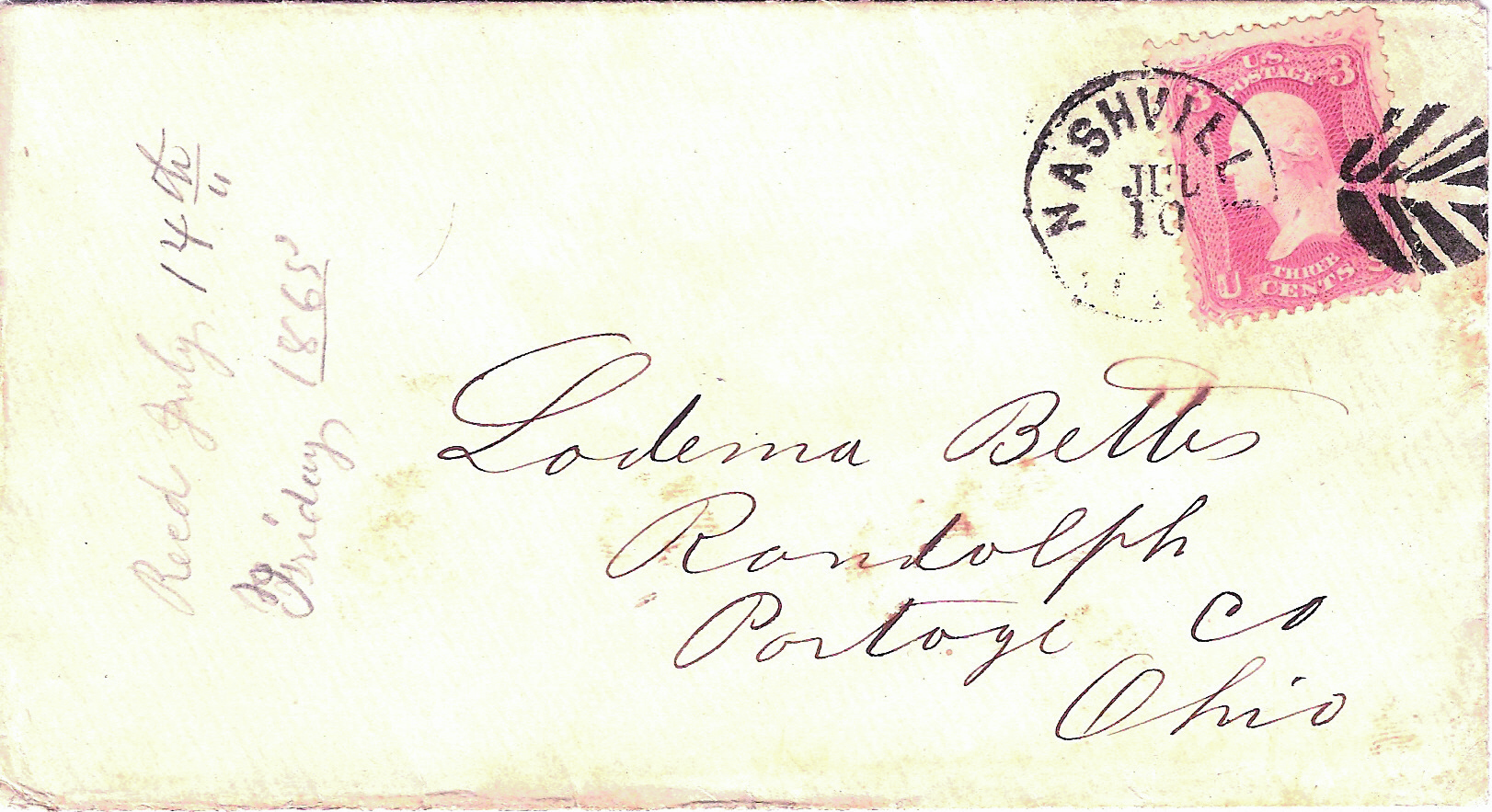 Our next item provides reference to Holly's first official recording session with Decca in Nashville, Tennessee. The cover was sent from the country music capital in 1865 features a 'fancy cancel' made out of cork cut into a leaf design. These cancels were available in a wide variety of designs from simple geometric shapes to the complex, such as eagles and flags. Nashville had several leaf designs in use between 1861 and 1870 and the design of this cancel seems to be the same as that recorded in use during 1866 which shows damage that is not evident on this strike. 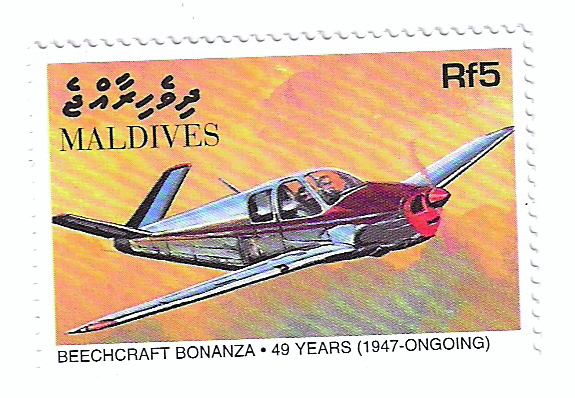 There are several stamps showing the Beechcraft Bonanza as this aircraft has one of the longest production runs of any aircraft (from 1947 to the present day). The stamp from the Maldives shows the V tail version that was used that fateful day.

Maps are always useful, and the meter mail 'Iowa’s Largest Bank' shows an outline map of Iowa. Mason City is somewhere above the 'ow' in 'Iowa' and Dakota is to the North West. 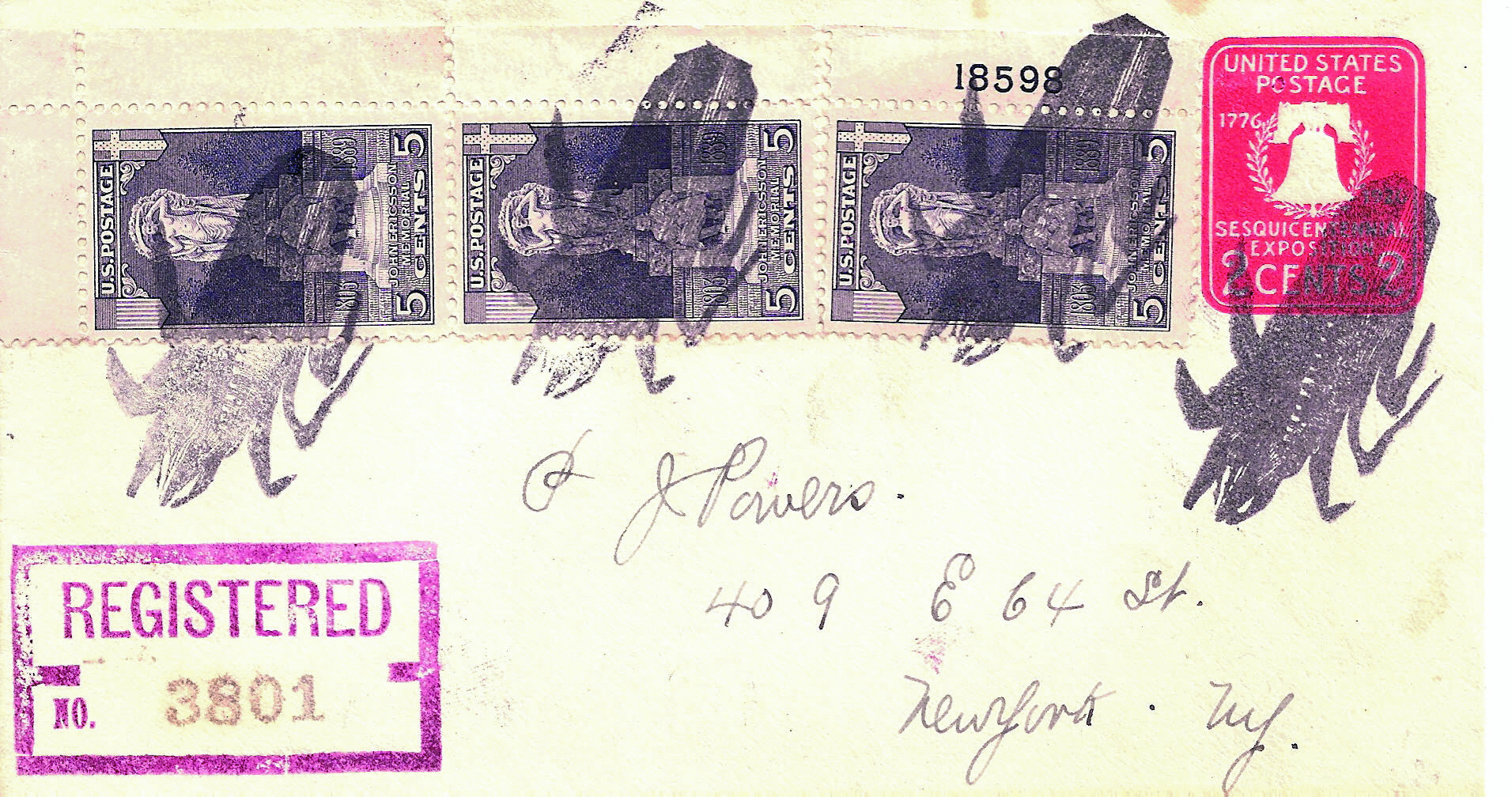 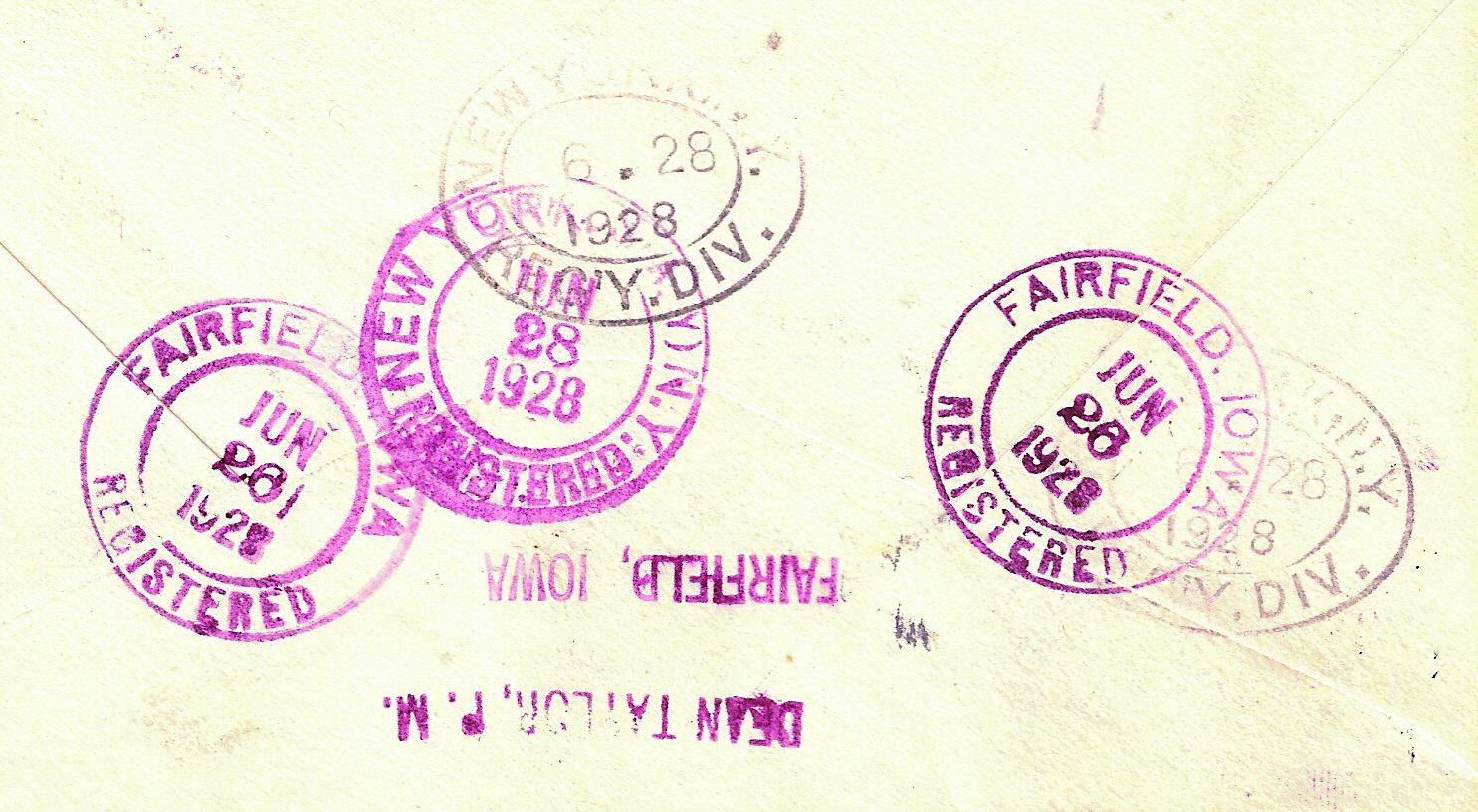 The crash site was a cornfield (maize not wheat) which abound in this part of Iowa. A cover from 1928 from Fairfield, which is South of Madison, shows the importance of corn to the local economy. These late fancy cancels from the 1920s and 1930s  should be collected wherever possible on registered covers as a large number were never sent through the post. As we can see from the back of the cover each receiving post office adds a date strike so that the route and time taken are known. 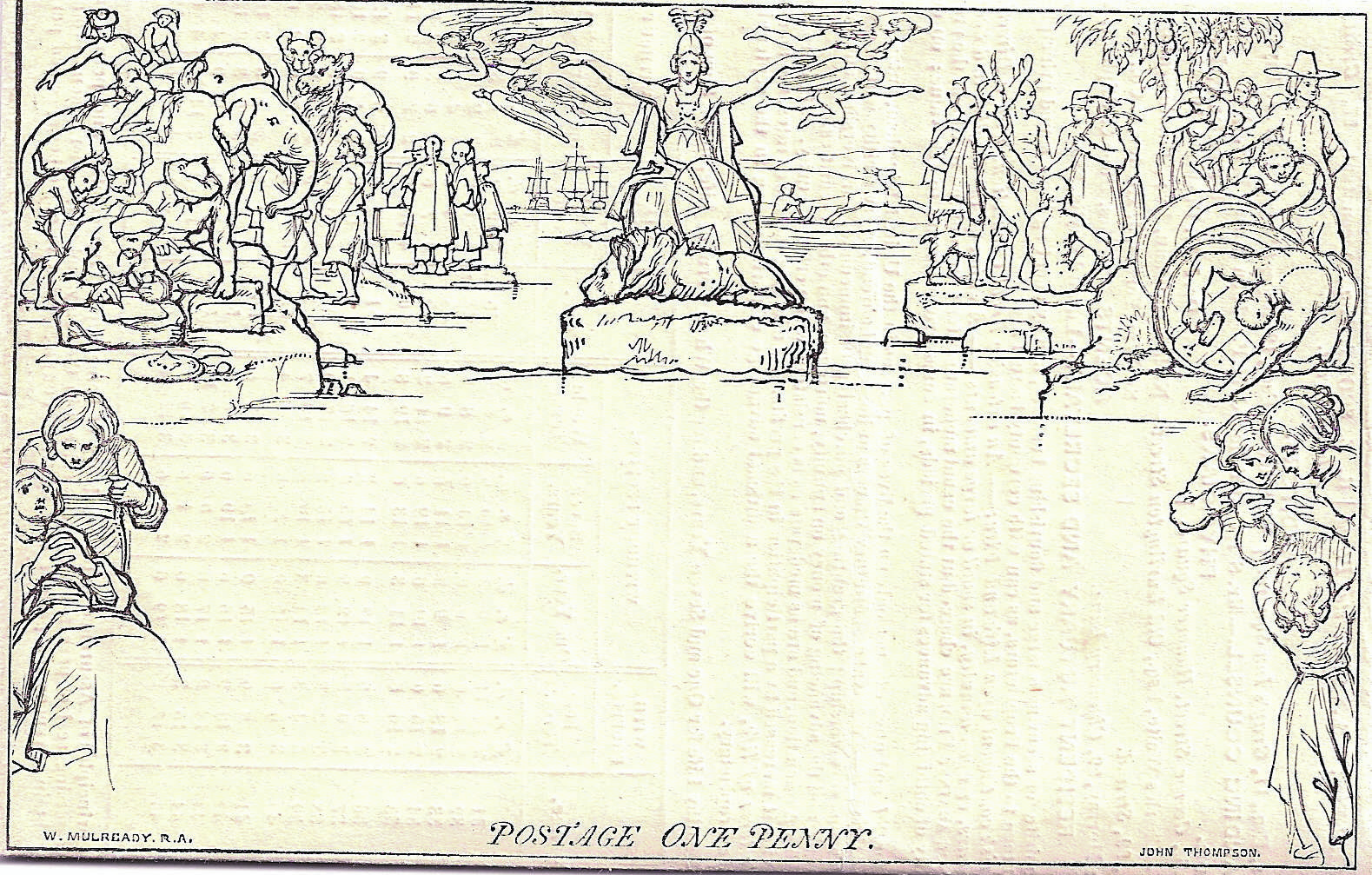 The Mulready postal stationery letter sheets were issued alongside the first postage stamps but were not popular and large numbers were unsold to the general public. Large numbers of this surplus were sold on for advertising purposes and were used for a variety of purposes.

The one illustrated shows an annuity table from an insurance company underlining the tragedy of dying at only 22, bringing us back to the theme of Holly's tragic demise. 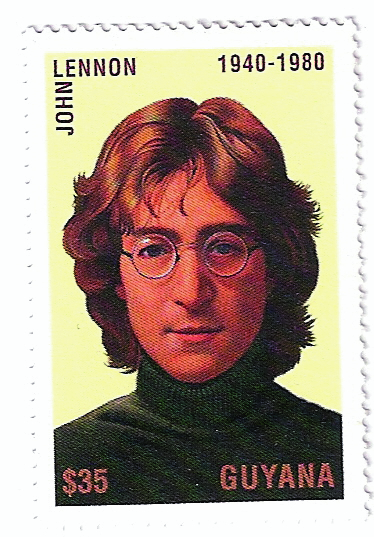 Both the Beatles and the Rolling Stones were heavily influenced by Buddy Holly and McLean's American Pie makes cryptic reference to both groups. The 1995 sheetlet from Gambia entitled The History of Rock and Roll shows many of the musicians who contributed to this music, including Mick Jagger. Stamps featuring the Fab Four or the Beatles and John Lennon are numerous and the example shown is the 1995 Guyana stamp on the 15th anniversary of his death. Also shown is a Canadian 1950s meter mail referring to 'fab' music.

McLean's homage to Holly includes the well-known lyrics: 'Them good ol' boys were drinkin' whiskey 'n' rye, Singin' this will be the day that I die.' A meter mail from New York advertising Whiskey - The Whiskey Without Regrets – provides a subtle reference to McLean’s memories of times out drinking in the New York town of Rye whilst remembering the three victims of February 1959.

Our final item is a reference to the Columbia Pictures film the The Buddy Holly Story, starring Gary Busey in the title role, and demonstrates the impact Buddy Holly has had with the recording industry. This cover illustrates US undated mail which is used for advertising and non urgent mail and bears a lower rate than standard dated mail.

Collecting stamps with the relevant subject depicted on them is a great way to begin a thematic collection, but as dealer and expert David Griffiths explains, postal history and ephemera can also be used to tell a story, even if the material is older than the subject in question.

'I have for some years been fascinated by thematics and social philately,' David says. 'Stamps and postal history document social history both at the time and in retrospect. But as seen in this Buddy Holly-inspired display, there are social constants meaning material that pre-dates the event in question could also be relevant.'