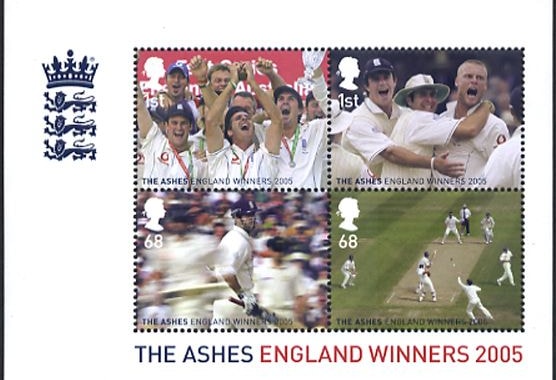 There have been many cricket stamps issued over the years, giving collectors and cricket fans the chance to create a themed collection, here's five to get you started… ...

There have been many cricket stamps issued over the years, giving collectors and cricket fans the chance to create a themed collection, here's five to get you started…

Cricket, May 1973
The centenary of County Cricket was marked with three stamps showing sketches of pioneering English player WG Grace in action, albeit in a rather sedate style. The 7½p value shows the rotund all-rounder in unflattering profile, facing right, the Queen peering over his shoulder toward the outfield. The stamps were the first to be reproduced as ‘PHQ cards’ – postcards showing a larger version of the stamp design.

Summertime, August 1994
Five warming water-colours celebrated the sunnier side of British summertime, including the world famous 'home of cricket', Lord's in London.

Australia's 'Return of the Urn' 2014
Australia Post celebrated the 'return of the urn' and the 5-0 whitewash cricket win over England with two stamps.The domestic base-rate (60c) stamp featured an illustrative design representing the original Ashes Urn, while the international-rate stamp ($2.60) featured the Australian cricket team celebrating with the Waterford crystal trophy and a replica of the original Ashes Urn – the original urn is now kept permanantly at Lord's in London.

New Zealand, 1969
England also played an entertaining series against New Zealand in early summer 2015, and the Kiwis have issued cricket stamps too, including this 1969 Health stamp, which included a 1c surcharge for Children's Health Camps.

SIGN UP TO THE ALLABOUTSTAMPS E-NEWSLETTER FOR MORE TIPS, NEWS, OFFERS AND COLLECTING ADVICE…