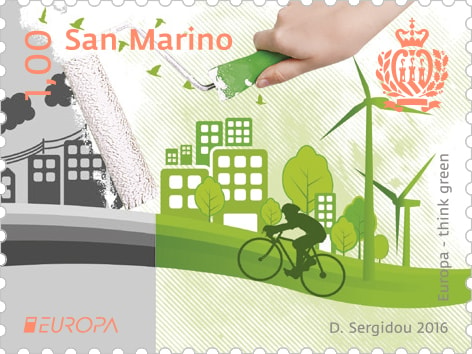 Ecology is a branch of biology with several different strands – the interaction between organisms and the environment; the development of ecosystems; the co-dependence between our planet and its people; and the political movement to protect the environment.

From early stamps featuring ‘father of ecology’ Charles Darwin on to more recent topics such as international conferences, a collection of ecology-themed stamps demonstrates the issues that are important to countries around the world; charts the history of discovering and protecting our planet and marks important landmark moments in ecological history.

1. Countries participating in the 2016 Europa theme of Ecology: Think Green have been asked to produce their themed stamp to a common design in celebration of the sixtieth anniversary of Europa stamps - as shown on this San Marino stamp.

2. Britain's 2014 Sustainable Fish issue had an ecology theme, with ten stamps featuring paintings of both sustainable and threatened fish in their natural underwater habitat, demonstrating which fish could sustainably be used for human consumption to prevent the overfishing of declining species such as cod and haddock.

3. The WWF has issued over 2,000 postage stamps from 220 countries since 1983. These stamps form a fascinating record of endangered species over more than three decades, with countries often issuing official WWF stamps to draw attention to the plight of the species of their nation. This 2011 stamp from Greece features a cute panda cub.

4. In 1999, the United States Postal Service began its long-running Nature of America series, which comprised twelve stamp sheets (a total of 120 stamps) featuring six different ecosystems. Designed by Ethel Kessler, the series ran until 2010 and included the Great Plains Prairie, the Pacific Coral Reef, the Hawaiian rain forest and the Alpine Tundra, demonstrating the huge variety of landscapes on this massive continent.

5. This Czech Republic stamp highlights the importance of trees in maintaining a healthy eco system. The sytlised tree is shown with the variety of plant and animal life that it supports.