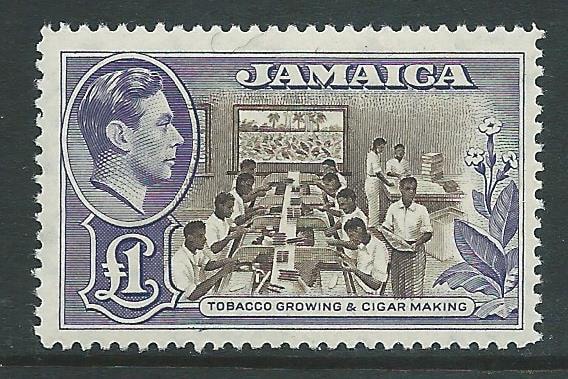 It was Christopher Columbus who first discovered tobacco and its many uses in 1492 on his very first voyage to the West Indies. On the island of Hispaniola he encountered natives who prepared a kind of cigar assembled from dried sliced tobacco leaves which were contained within maize leaves. The Indians referred to these ‘cigars’ as tabago or tabako and it is believed that this is the origin of the word tobacco.

1. An interesting 1949 $1 stamp from Jamaica (above) rather cleverly depicts both cigar making and tobacco growing at the same time. We see the interior of a cigar-making factory with a large window at the back revealing the tobacco plantation outside.

2. The newly independent Malagasy Republic issued a 40-franc stamp in 1960 depicting a tobacco plantation. Perhaps the Malagsy postal authorities would think twice before choosing this kind of design today.

3. Some postage stamps have depicted people smoking. Sir Winston Churchill was one of many who relaxed with a good cigar. However, today most famous people (or their families) don't want them to be depicted on a postage stamp smoking a cigarette or pipe. Churchill is shown painting on this souvenir sheet from the Kathiri State of Seiyun (Aden) and has a cigar at hand.

4. One man who was a firm believer in the benefits of regularly smoking a cigar was Colombian Javier Pereira who celebrated his 167th birthday in 1956 according to a Colombian postage stamp issued that year. Colombia and many other Latin American nations have frequently included a lot of wording on their postage stamps. Pereira had this advice: 'Don't worry, drink a lot of coffee and smoke a good cigar'.

5. In 1980, the South African homeland of Bophuthatswana issued this hard-hitting stamp to encourage its citizens to give up smoking.

These days cigarette packets carry threatening messages such as ‘Smoking kills’, but this does not seem to dissuade people from continuing this deadly practice.

Smoking is also quite popular in the philatelic community; many collectors will have leafed through old stamp albums with a strong smell of tobacco smoke.

Article extracted from an in-depth look at tobacco on postage stamps, in the August issue of Stamp & Coin Mart.