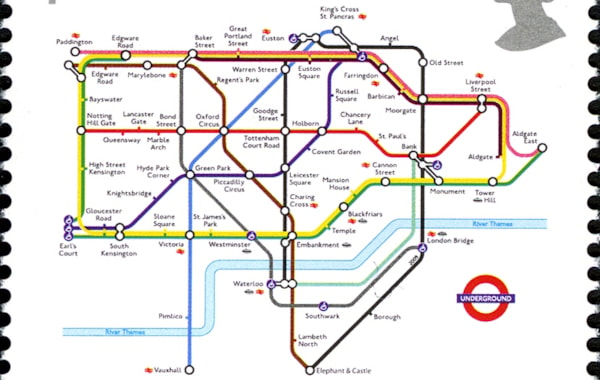 The new mail rail visitor attraction at The Postal Museum has focused attention on Britain’s history of underground travel for both passengers and mail. The UK led the way with the opening of the London Underground in 1863 and since then, countries around the world have opened their own underground transport systems – many of which have featured on stamps over the years.

The London Underground was a success from the start, attracting more than 38,000 passengers on its first day, and over nine million travellers within one year of opening.

In 1931, Harry Beck’s iconic London Underground map was created – a colourful chart which is now a globally-known illustration. The map featured in Royal Mail’s Design Classics issue of 2009, alongside other forms of transport such as a London bus and Mini car.

It would be quite a few years before other countries caught onto the subway system of travel, for example France didn’t open a subway until the start of the 20th century. Surprisingly, despite its beautiful Art Deco associations, there are few stamps commemorating the Paris Metro. A 1999 stamp issued by France celebrated the centenary of the railway, showing variations on the Metro sign. The original Art Deco station entrances, featuring decorative ironwork and glass structures, were created by architect Hector Guimard; today 86 of the original 141 entrances are still in existence.

In 2008, Cuba featured the Paris Metro in its Underground Trains issue, showing a subway train and one of the famous Art Deco Metro signs. More than four million passengers use the Paris Metro daily, and it is the second busiest European subway, after the Moscow Metro.

Despite the impressive user numbers of the Paris Metro, these pale into comparison with the magnificent Moscow Metro, one of the world’s deepest underground passenger railways, with daily passenger numbers approaching ten million. The Moscow Metro was opened in 1935 in a blaze of publicity, with posters, songs and parades, all promoting the railway as the busiest and fastest in the world, as trumpeted in the anthem ‘Songs of the joyous Metro conquerors’ song sheets for which were distributed in their thousands around the country. The railway is noted for its opulent architecture, with its stations sometimes referred to as ‘people’s palaces’.

The 2013 GB stamps exploring the history of the London Underground in its 150th anniversary year offer some interesting collecting possibilities for starting this theme, including stamps showing railway workers tunnelling under the streets of London to create the railway, Edwardian commuters on their way into the city, and the Jubilee Line at Canary Wharf, one of the most recent additions to the London Underground network.

Moving onto more recent engineering projects, the Cairo Metro in Egypt, which opened in 1987, is one of only two underground Metro systems in the whole of Africa. The Metro had been planned in Egypt since the 1930s, however war and revolution delayed its creation, and work finally began in 1982. The opening of the Cairo Metro was celebrated on an Egypt stamp issued that year which shows a subway station with a train at the platform, and this was followed by a second stamp, issued in 1997, marking the opening of a second Metro line in 1996. The 1999 stamp here shows a cutaway diagram of a train passing below the River Nile in a tunnel, along with the words ‘Crossing the Metro under the Nile’.

Article adapted from an in-depth feature in the June issue of Stamp & Coin Mart, available from our website.