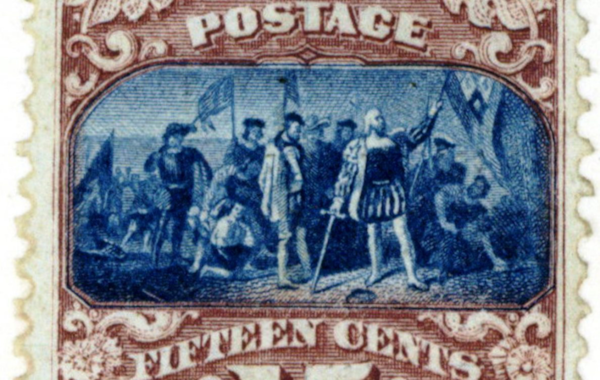 The central role of migration and settlement in the economic, political, social as well as cultural development of the United States ensures it is a theme very well represented upon the nation’s postage stamps.

1. The first stamp to tackle the subject was the United States 1869 15 cent stamp containing James Smillie’s vignette engraving depicting the landing of Columbus in the Americas on 12 October, 1492. Based on John Vanderlyn’s famous painting displayed inside the Capitol’s Rotunda at Washington, this event is widely recognised to be a turning point in the history of migration to the Americas. This and succeeding postage stamp issues provide clear allusions to the economic, military and religious incentives underlying individual decisions to migrate and settle within America from the closing years of the fifteenth century through to the present day.

2. This United States 13 July, 1984 20 cent stamp commemorates the 400th anniversary of the First Raleigh Expedition to Roanoke Island. It depicts the Elizabeth Galleon, one of the ships associated with the establishment of the famous Roanoke Colony in modern Date County, North Carolina.

It was at this colony on August 1587 that the first English child was born in the United States, a girl named Virginia Dare. Since the Roanoke Colony mysteriously vanished soon after her birth, Virginia’s fate is uncertain nevertheless she subsequently became a prominent icon in American folklore and politics being referred to in poems, books, comics and films.

3. Religious and political persecution in the seventeenth century also led to waves of European refugees settling in various parts of America. The United States 18 December 1920 Issue 2 cents stamp commemorates the tercentenary of the establishment of Plymouth Colony, Massachusetts in 1620 by a group of religious dissenters known as the Pilgrim Fathers.

4. A new phase in the history of migration and settlement within the United States followed the War of Independence. Initially confined to the eastern seaboard, the United States Government initiated a sustained policy of westward expansion into the American hinterland. It resulted in the nation’s expansion towards the pacific coastline to its modern territorial extent.

The United States 15 July 1938 Issue 3 cent stamp commemorates one of the earliest phases of this new era in migration, the settlement of the North-western territories now known as Ohio, Indiana, Illinois and Michigan undertaken by veterans from the War of Independence and the Ohio Company.

5. The United States Government also acquired land for settlement via diplomacy and financial purchases of territory from foreign colonial powers in the region. One notable example is the acquisition of lands acquired from the Spanish and French which formed parts of the Mississippi territory.

These eventually became part of the State of Mississippi in 1798 and the various stages of this territorial expansion are depicted upon this United States 8 April, 1948 commemorative Issue 3 cent stamp for the territory’s 150th anniversary.