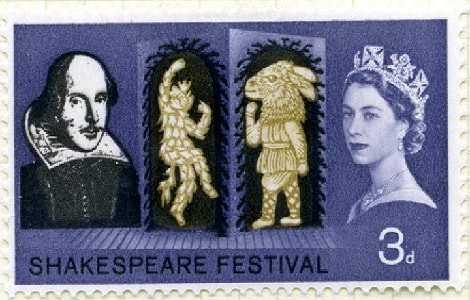 Marking the 400th anniversary of Shakespeare’s death, we present our pick of five stamps celebrating the life and work of the bard from Stratford on Avon.

1. This 1964 stamp, issued to mark the Shakespeare Festival of that year, was the first time that a commoner had been featured on a British stamp.  The 1/3 value featured a scene from Romeo & Juliet, with the Queen on the right and Shakespeare on the left.

2. Although there are no existing portraits of Shakespeare drawn in his lifetime, his image is familiar to people around the world. This St Helena stamp was issued in 2005 as part of a ‘first Elizabethans’ issue and shows Shakespeare in front of a landscape of Elizabethan buildings.

3. The year 1964 marked the 400th anniversary of Shakespeare’s birth and saw several countries release Shakespeare stamps. This USA stamp has Shakespeare surrounded by symbols of his plays, including the skull from Hamlet.

4. The Hamlet skull has provided inspiration for generations of stamp designers, as shown on this 2014 stamp which features a dramatic scene from the play, with Hamlet contemplating Yorick’s skull.

5. Thousands of quotes from Shakespeare’s works have made their way into everyday English over the centuries. This 2014 stamp from Gibraltar was part of a set of four stamps featuring famous quotations from the Bard’s plays. Here, the lines ‘What’s done cannot be undone’ from Macbeth are shown along with a page from the play and a portrait of Shakespeare.