Your guide to stamps honouring philosopher and physician Albert Schweitzer 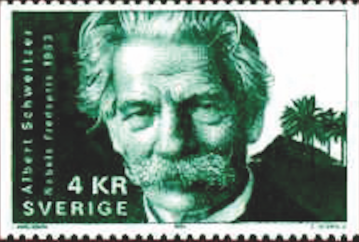 We take a closer look at some of the many stamps that honour Albert Schweitzer, the philosopher and physician born in January 1875

Some biographies describe Albert Schweitzer as a Frenchman, while others believe he was German. The debate arises because he was born in Alsace, the tiny province on the French/German border, part of France from 1648 until 1870. After the Franco-Prussian War the territory became part of the German Empire but was later reallocated to France under the Treaty of Versailles.

Schweitzer was born on January 14, 1875. His father was a pastor in the Lutheran church and it was assumed that he would follow in his footsteps. After completing his schooling, Schweitzer enrolled at the University of Strasbourg as a student of philosophy, theology, and musical theory.

During his university years, Schweitzer wrote books on theological subjects and philosophy. He continued his musical studies in Paris becoming an accomplished organist and an authority on Johann Sebastian Bach.

Into Africa
At the age of 30, Schweitzer decided that his life’s work should be as a medical missionary in Africa, and after studying Medicine for seven years he set out for Gabon, then a province of French Equatorial Africa, with his wife, Helene, who was a trained nurse.

The pair travelled to the village of Lambarene and founded a hospital. But construction work was interrupted when World War One broke out. As Alsatian (German) citizens in a French colony, they were interned as prisoners of war. Thankfully, after four months of negotiation, the pair were released and continued their work, and by the time he died, the hospital included more than 70 buildings with 350 beds. Among the last additions was a leper colony, funded by the $33,000 Nobel Peace Prize awarded to him in 1952.

Global acclaim
Many journalists visited the hospital and news of his work spread. He was elected to the French Academy in 1951, and four years later, the Queen awarded Schweitzer the Order of Merit.

Schweitzer also had a great sense of humour. Approached by two schoolgirls during a trip in America the great man was asked politely ‘Dr Einstein, can we have your autograph, please?’ Not wanting to disappoint them, he took the book and wrote ‘Albert Einstein, by his friend Albert Schweitzer.’

Many stamps have honoured his work. The majority appeared in 1975 to mark his birth centenary. Poland was an exception, however, as their stamp was issued in 1986. Intended to mark the 20th anniversary of his death, the issue appeared a year late. Another exception was in 1960 when Schweitzer featured on an airmail stamp issued by Gabon.

One of the most attractive Schweitzer stamps came from South Korea, and showed a portrait of the doctor and a map highlighting Gabon. The 10 won stamp also shows a syringe, symbolising Schweitzer’s attempts to control tropical diseases.

France marked his birth in 1975 with a charity issue. In addition to a portrait, the design showed a mother taking her baby to the hospital. The first day cover included a special postmark and a pictorial cachet, featuring a nurse caring for a patient. Also included is a forest animal and a clef, marking Schweitzer’s other interests - music and animal welfare.

His love for animals was highlighted by Upper Volta in a set issued in 1975 with designs incorporating various birds. A miniature sheet portrayed Schweitzer, wearing his sun helmet, and a multi-coloured bird sitting on a branch.

Dr Schweitzer died at 11.30pm on September 5, 1965, at the age of 90, in his remote jungle hospital. His death was not announced until the next day to give his daughter time to send telegrams to his relatives.

He was buried at Lambarene, in a brief ceremony, next to the ashes of his wife, Helene, who had died in 1957. A cross he made himself was used to mark the grave, on the banks of the Ogooue River, alongside the hospital to which he had been devoted for so many years.