Enjoy the excitement of the space race with our guide to five top space-themed stamps.

Enjoy the excitement of the space race with our guide to five top space-themed stamps.

For thousands of years, humans have gazed up at the stars and built up a picture of what secrets the universe might contain. However, it is only within the last century that space travel has even been a possibility. The history of man’s exploration of the universe can be traced through a collection of space-themed stamps, featuring planets, space rockets, astronauts and scientific breakthroughs, as we discover here.

1. One of the earliest stamps featuring a space vehicle was issued in 1948 and wasn’t actually intended as a space stamp at all – it was issued by the USA to commemorate the centenary of Fort Bliss on the New Mexico/Texas border. Designer Charles C Chickering cleverly managed to depict several facets of the fort’s history into the design, including the fort itself, fort workers, vehicles, oxen and even a camel.

2. Perhaps the pinnacle of the space age so far has been the achievement of landing man on the moon, a world famous event in 1969 which was celebrated on USA Apollo VIII stamp featuring a painting inspired by the now-iconic ‘earth rising’ photographs, showing planet earth as seen from the moon.

3. Commemorating the fiftieth anniversary of space discovery in 2007, Australia’s ‘blast off’ fifty years in space series has some nice images of the Hubble Space Telescope, the moon walk, and the 1977 Voyager mission.

4. Over the years, Russia has issued stamps featuring the first man in space (Yuri Gagarin) the first woman in space (Valentina Tershkova) and even ‘spacedog’ Lajka, the first animal to orbit the earth. This 2004 Russian stamp marks Gagarin's seventieth birthday.

5. The 2016 Pluto - Explored! stamps show new Hubble Space Telescope images of the planets, and Pluto – which some scientists no longer class as a planet. The issue is a stunning update to the last USA planet stamps which were issued in 1991 when the Hubble Telescope had been orbit for only a year and still had camera problems. 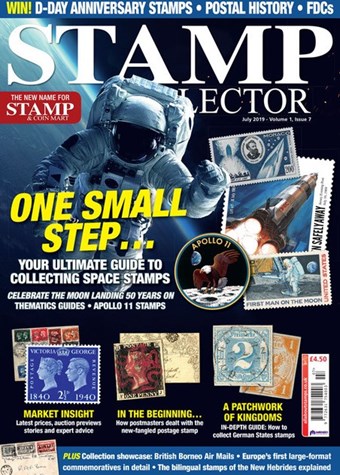