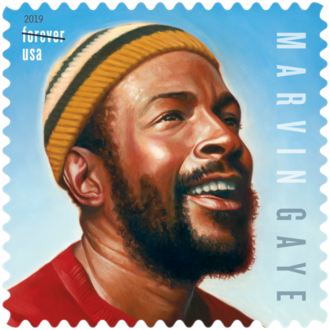 The US Postal Service has revealed several of the new Forever stamps and other stamps to be issued in 2019, with stamps to honour figures including Walt Whitman, Marvin Gaye and Gregory Hines

A large part of the USA's stamp schedule has been released, with a range of subjects to be celebrated over the coming twelve months.

Subjects include the Woodstock music festival, which took place in Bethel, New York, in August 1969; the soul singer Marvin Gaye who was born in 1939; and poet Walt Whitman (1819–1892). Gregory Hines, whose 'unique style of tap dancing injected new artistry and excitement into a traditional American form' is honoured as part of the Black Heritage series.

Despite calls for a stamp to honour the late Aretha Franklin, the 'Queen of Soul' does not appear on the provisional list.

'The miniature works of art illustrated in the 2019 stamp program offer something for everyone’s interest about American history and culture. From legendary poet Walt Whitman to the entertainment genius of Gregory Hines to the majestic beauty of our Wild and Scenic Rivers, this program is diverse and wide ranging and tells America’s story on stamps.'

The stamps revealed so far are as follows:

Year of the Boar
The twelfth and final stamp in the Celebrating Lunar New Year series.

Cactus Flowers
This issuance celebrates the beauty of cactus flowers with a booklet of 20 stamps.

Alabama Statehood
This stamp celebrates the bicentennial of Alabama statehood.

Marvin Gaye
With this new stamp in the Music Icons series, the U.S. Postal Service honors Marvin Gaye (1939–1984) — the “Prince of Soul” — one of the most influential music performers of his generation.

USS Missouri
The Postal Service celebrates USS Missouri (BB-63), America’s last battleship, with the issuance of a commemorative stamp in 2019, coinciding with the 75th anniversary of Missouri’s commissioning on June 11, 1944.

Post Office Murals
This pane of 10 stamps features five different murals designed to add a touch of beauty to Post Office walls and help boost the morale of Americans during the era of the Great Depression.

US Flag
With this new 2019 stamp, the Postal Service celebrates the American flag.

Walt Whitman
With this stamp, the 32nd in the Literary Arts series, the Postal Service honors poet Walt Whitman (1819–1892) on the bicentennial of his birth.

Woodstock
This stamp issuance celebrates the 50th anniversary of the Woodstock Music and Art Fair, the most famous rock festival in history.

Joshua Tree
Celebrating the desolate beauty of the Joshua tree (Yucca brevifolia) and its distinct desert environment, this Priority Mail stamp depicts a common scene throughout much of the Mojave and Sonoran Deserts.

California Dogface
The California dogface graces the seventh non-machineable butterfly stamp for use on irregularly sized envelopes, such as square greeting cards, invitations or announcements.