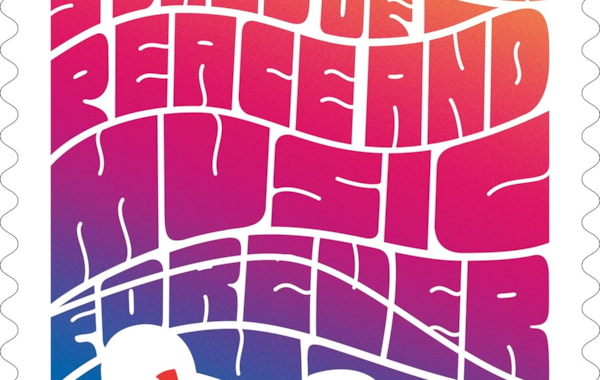 The US Postal Service has issued a single stamp to celebrate the fiftieth anniversary of the Woodstock Festival with the colorful design intended to represent the peace and music of the festival.

The stamp was recently dedicated at a First Day of Issue event held at the Metropolitan Museum of Art in New York City.

Woodstock 1969 Festival Co-Creators and Concert Producers Joel Rosenman and Michael Lang took part in the ceremony, along with Jayson Kerr Dobney, The Metropolitan Museum of Arts, Musical Instruments, Frederick P. Rose Curator in Charge. Joel Rosenman said: ‘It’s an honor and an inspiration to be commemorated by the Postal Service. The USPS Woodstock Forever Stamp is an official acknowledgment of something we have felt for 50 years: Woodstock is “Forever”’.

In August 1969, approximately 500,000 people gathered for the Woodstock Festival in the small farming community of Bethel, NY. Woodstock was the most famous rock festival in history and a dramatic expression of the youth counterculture of the 1960s. Promoted as ‘Three Days of Peace and Music’ the Woodstock festival came to symbolize a generation.

The festival featured more than thirty performers, including Joan Baez; The Band; The Grateful Dead; The Who; Carlos Santana, Joe Cocker and Jimi Hendrix, who performed an electrifying rendition of ‘The Star-Spangled Banner’ that became legendary.

The stamp art features an image of a dove along with the words ‘3 Days of Peace and Music’ evoking the original promotional poster for the festival. In the iconic 1969 poster, designed by graphic artist Arnold Skolnick, the dove was perched on the neck of a guitar. In the stamp art, the words are stacked in the background in brilliant colors along with the year 1969, USA, and Forever. The white dove stands in the foreground. Art director Antonio Alcalá designed the stamp.

The USPS issued a similar stamp in 1999 (pictured) as part of their ‘Celebrate the Century - 1960s’ series.

(images courtesy of US Postal Service)