Your guide to Hitler stamps 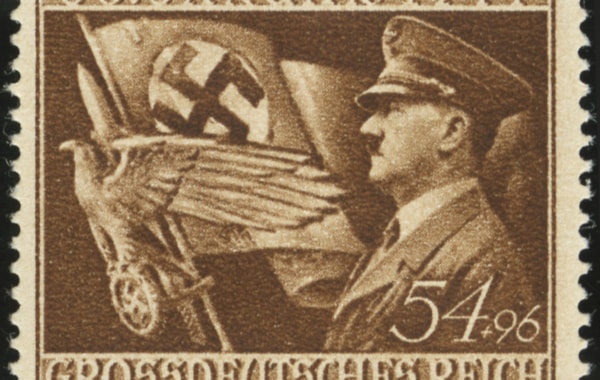 Between 1933 and 1945 Adolf Hitler appeared on a range of stamps issued by Germany and those countries occupied by Germany during World War Two. Whilst some collectors want to avoid these stamps, the stamps are collected. Find out more in our stamp guide.

Between 1933 and 1945 (and from 1938 to 1945 in German-occupied countries) Adolf Hitler's face appeared on a variety of stamps. Most are worth just a few pence, though there are some rarities.

Not all stamps of the Third Reich feature his portrait; many earlier issues reflect the Nazi ideology or commemorate military or political events of the past.

President Hindenberg appointed Adolf Hitler as Chancellor of Germany on 30 January 1933. In July of that year the newspaper Deutsche Allgemeine Zeitung announced that the stamps of Germany would in future be printed on paper with a swastika watermark. It was an early stage in the Nazification of Germany. The stamps issued by the Third Reich increasingly reflected the ruling party's sinister policies, featuring eagles, towering swastikas and saluting crowds.

The Hitler Youth, introduced in 1933 (and compulsory by 1936) to prepare the soldiers of the future. Stamps of 1935 feature a young, military bandsman and in the anniversary set of 1938, they illustrate the Nazis' admiration for the Graeco-Roman world and its own idolisation of the human form.

In 1935, German stamps commemorated the twelfth anniversary of the 1923 Bierkeller Putsch, Hitler's failed coup which led to a conviction for treason and a five-year jail sentence; he served just enough of it to write Mein Kampf.

The first stamp to actually show Hitler was issued in April 1940 to commemorate his 51st birthday. The image shows Hitler with a young girl and so is suitably sinister, issued at a time when the leader's actions were causing suffering across Europe.

In January of 1941 a single stamp was issued to commemorate the German-Italian Axis, with both Hitler and Mussolini shown. In April a stamp showed a different portrait, and was issued to mark Hitler’s 52nd birthday – his next three birthdays were also marked with stamps; his 54th birthday in 1943 saw six birthday stamps issued with the same design and the final birthday stamp was issued in April 1944, just over a year before his suicide.

Definitive stamps featuring Hitler's portrait were first issued in August 1941 replacing the previous definitives which had featured the Hindenburg Medallion. Between 1941 and 1945, a total of 21 'Hitler Head' definitive stamps were issued; they ranged in denomination from 1 to 80 pfennigs. The 1-8 pf values were typographed, the remaining values were engraved. The 42 pfennigs value was not issued until 1944.

The portrait showed the Furher facing right and it is reported that he demanded a royalty from every stamp sold.

Between 1942 and 1944, four higher value stamps were issued with the same portrait, although the stamps were engraved. They were in values of 1, 2, 3 and 5 RM (mark). Used examples of these stamps printed in 1944 are more expensive to collectors today.

In January 1944 a single stamp (with a surcharge to raise funds) was issued to mark the 11th anniversary of Hitler’s rise to power.

Should I collect Hitler stamps?

Anyone with even a passing interest in modern history will know of Hitler's life and the atrocities he was responsible for during and leading up to the Second World War. It goes without saying that any collection of Hitler stamps should be a historical record of that difficult time and nothing more.

Some commentators believe collecting any ephemera relating to the Nazis is wrong, so any collector should bear this in mind when discussing or exhibiting such stamps.

As is often the case with stamp collecting, the designs and stories behind them often provide a fascinating window into world history, politics and society. Hitler stamps certainly shed light on the complexities and conflict of the war.