In the final article in our festival series on Tristan da Cunha, Neil Donen and Gary Wayne Loew chart the 1935 Tristan da Cunha overprints and highlight a suspected forgery.

For the past 30 years the Tristan da Cunha (Tristan) overprints on the 1935 Great Britain Silver Jubilee stamps have both fascinated and attracted collectors (Figures 1 and 2). They have been labelled bogus by some as they were not legal tender, yet they have commanded increasingly higher prices when coming to auction. The reason for this interest is not clear, but one suspects it has something to do with the mystique of Tristan.

In this last of three articles about Tristan da Cunha and the 1935 Silver Jubilee issue, we provide some background history to their production and sales. Finally, we will discuss the finding of a forged overprint which has come on to the market in the past two years

Harold Wilde served as chaplain, administrator and postmaster on Tristan between 1934 and 1940. Aware of the increasing interest by philatelists in receiving covers from Tristan, Wilde tried, unsuccessfully, to interest both the Society for the Propagation of the Gospel in Foreign Parts (SPG), who appointed him to his position on Tristan, and the British Post Office in producing stamps for the island.

In 1937 Wilde returned to England. Prior to his departure back to Tristan in November, he arranged to have overprints reading ‘Tristan / da Cunha’ made which were applied to the Great Britain 1935 Silver Jubilee stamps. In August 1940 Wilde left Tristan for the last time and subsequently served as chaplain at HMS Royal Arthur, a naval shore base established near Skegness in Lincolnshire, England. It was during this period that, according to Brian Cartwright, he gave the overprinted stamps to selected friends as gifts. We are not aware of any of these overprints being used by Wilde whilst he was on Tristan.

The first formal awareness of the existence of these overprints by philatelists occurred with the publication of George Crabb’s book on the postal history of Tristan.

In the book Crabb notes:

‘Some years ago it was reported that two 1935 Silver Jubilee stamps had been seen overprinted “Tristan da Cunha”, this was carried out “properly” and not by “hand”. I have not seen these items’.

It is possible he was referring to an as yet unidentified September 1978 auction, where two overprints (Nos. 19 and 20) on 1d stamps were offered for sale. This was also referenced by Alastair Hacket in his 1982 book on the 1935 Great Britain Silver Jubilee issue.

Subsequently Ward described an overprint on cover three years later with Williams adding to the list the following year. In 1991 Brian Cartwright published the first of his four articles providing a list of known overprints. Cartwright’s articles also detailed part of the background story provided above.

Tony Ainscough subsequently summarised the sales of the various overprints in the Flagstaff in 1992. A 1999 article in a Stanley Gibbons newsletter identified overprint number “36” appearing on a ½d stamp suggesting this to be the highest number of the series. Over the intervening years more overprints have been identified or come to auction. A 2016 article by Ray Lloyd provided an updated listing. All have confirmed Cartwright’s three major premises i.e.

Table 1 is a listing of the known numbers identified to date that have been associated with both values. 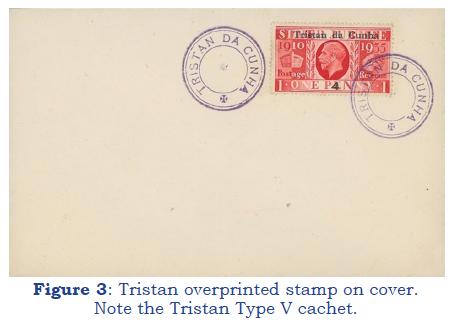 No other used stamps are known. Additionally, two vertical pairs have been identified, both ½d values (Nos. 5 & 6; Nos. 17 & 18) (Figure 4). None of the overprint stamps identified to date include a selvedge. Thus, there is no information on which cylinders the stamps came from. 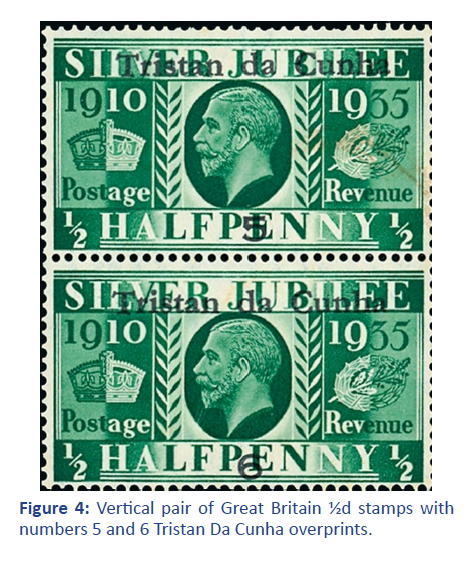 Unfortunately, there is no documentation either with whom Wilde contracted to produce the overprints or the nature of the work. With this limitation and only access to scans of most of the images a review of the overprints was undertaken to see if some basic questions could be answered. These included the quality of the overprints; an assessment if the numerical numbering order was horizontal or vertical; whether a single handstamp was used versus a type set block for the overprints was made and the alignment of the overprints to one another. Based on the findings we postulate the following possible methods of producing the overprints.

The overprints are very clean suggesting they were printed from metal rather than rubber (Figure 5). This is in agreement with Crabb’s comments noted above. The numbers below the wording Tristan da Cunha vary in their vertical alignment to the top letters, but the vertical distance between the letters and numbers is constant. There are subtle differences in the character of some of the letters, most notably the last “a” of Cunha implying that more than one version of the letter was used in the printing. 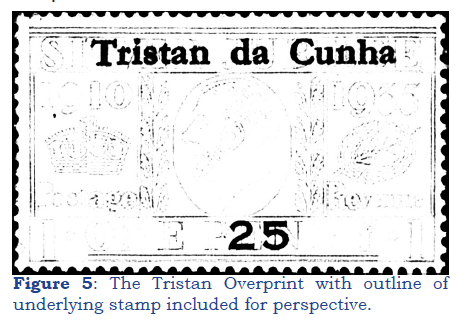 When comparing the vertical alignment of the words “Tristan da Cunha” to fixed points on the stamps (the back tip of the ear and the left side of the descending limb of the letter “d” of da) were chosen, a consistent relationship was noted. This consistency in the positioning of the overprint strongly suggests a mechanical positioning rather than the use of a single handstamp. There were a number of stamps where the letters did not align as expected. However, this difference affected alignment between two rows of stamps and not the majority.

The horizontal alignment varied between stamps but there did not seem to be a consistent pattern. When comparing the overprint positions of the two stamp values i.e. ½d and 1d, the vertical alignment and position of the overprints was the same for a given number with both values.

These findings and conclusions are summarised below:

Discovery of a Forged Tristan Overprint

In late 2017 one of the authors (ND) was asked by a fellow collector to comment on a 1d Great Britain 1935 Silver Jubilee stamp overprinted Tristan No. 6 the collector was contemplating purchasing. The presence of a partial cancel on the stamp was noted and felt to be unusual. Originally the item had been sold by Spink in London (Auction 16027, 26 April 2016, Lot #631) and was offered for sale, again by Spink, at the Caerynn sale in November 2017 (Lot #810). 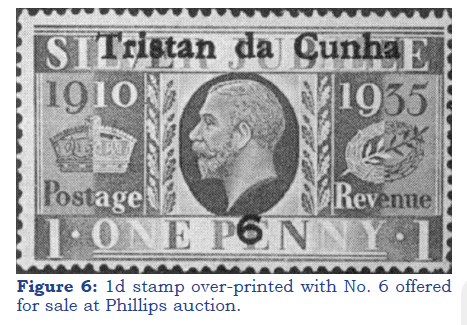 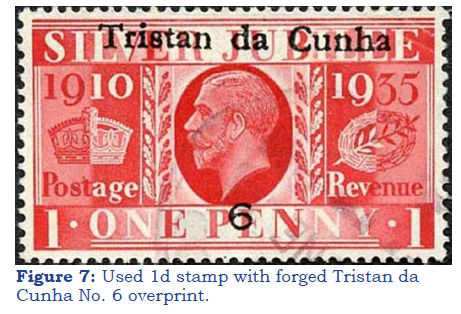 Comparing the above listed stamp with that of the originally offered overprinted Tristan No.6 item (Phillips sale of 19 September 1991 Lot #786), a number of differences were noted. The more obvious differences are highlighted in Table 2. The images of the items offered at the two sales are also included (Figures 6 and 7).

There is also the issue of alignment. As can be seen in Figure 8, above, the number “6” at the bottom of the “Spink overprint” is both different in appearance and shifted to the right compared to the original item from the 1991 Phillips sale (Black & White image). It is obvious that the two overprints are quite different. 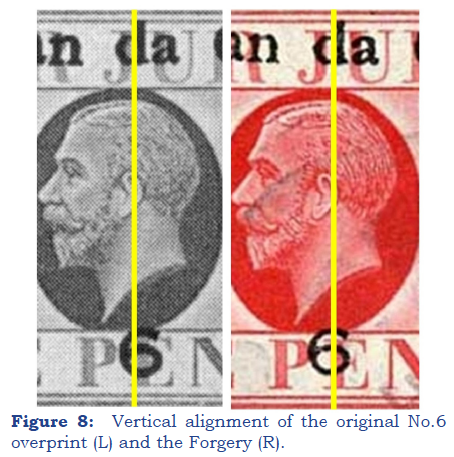 The final analysis involved using retroReveal (http://retroReveal.org) to look at the underlying cancel. This program, provided by the J. William Marriott Library at the University of Utah, uses a series of mathematical algorithms to break the colours into separate layers or spaces. Multiple black and white images are presented allowing one to choose the clearest image (Figure 9).

The scan shows a wide rimmed datestamp. A few letters are visible in the centre, notably the letters ‘ne’ and ‘pm’ below it. The features are highly suggestive of a rubber handstamp. None of the three known covers with cancels have any wording or suggestion of a date in the centre of the cancel. Finally, the retroReveal image shows that the number “6” is clearly seen and clean (see also Figure 6). It also appears to be above, rather than partially obliterated (i.e. below) by the datestamp. 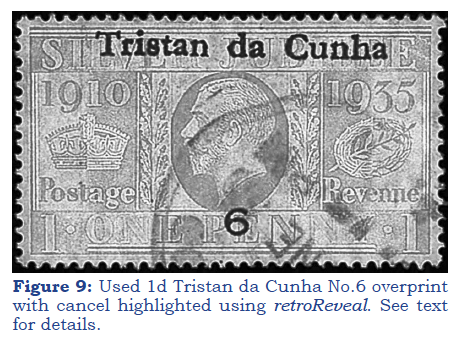 At the time of the 1991 sale these overprints had received passing notice and only came to the public’s attention with the widespread publication of Cartwright’s articles. Since then, their prices have risen steadily selling for as much as £1,300.

Based on all the accumulated information we believe there is no other conclusion than that the overprinted item recently offered through Spink was not part of the original printing i.e. it is most likely a forgery. To confirm our suspicions we would recommend subjecting both number “6” 1d overprints and at least two other overprints to analysis by a Video Spectral Comparator. This would permit comparison and identification of ink from the same era. Until such time the used 1d stamp with the Tristan da Cunha No. 6 overprint should be treated with suspicion.

We would like to acknowledge and thank Andrew Lajer (Figure 1), Brian Cartwright (Figure 6), ‘Caerynn’ (Figure 7) and Grosvenor Auctions (Figures 2-4) for their permission to reproduce the various images. We would also like to acknowledge the assistance of Roger Gilbert in helping us to evaluate the used cancel on the forged overprint. 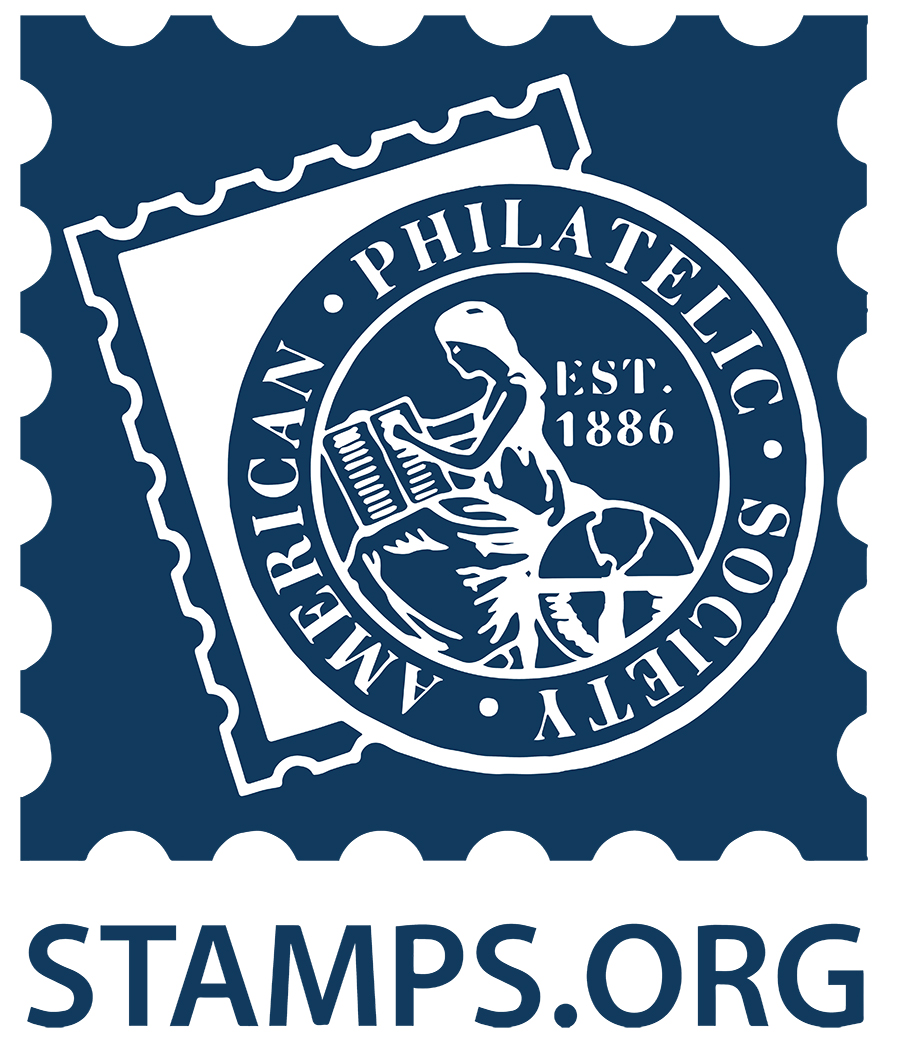 The APS offers a digital membership for $48, ideal for collectors located outside of the US. Click here to find out more and join today (you will need to register first, before accessing the membership form)